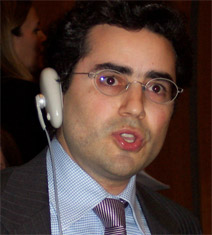 Editor’s Note: Hillel Neuer, Executive Director of UN WATCH will be the guest speaker at the 2011 Annual Jewish Foundation of Manitobacs Luncheon on Wednesday Nov. 23, 2011 at the Faimont Hotel [see related advertisement on this website]. The general public is invited to hear Neuer speaking on University of Manitoba campus on Wednesday Nov23 at 4:00 p.m.,100 Fletcher Argue Building,(Main Theatre Between Dafoe Library and the Tier Building) hosted by the Canadian Institute for the Study of Antisemitism (in co-operation with the Jewish Foundation) http://www.canisa.org . My interview with Neuer on October 31, 2011 follows below]

1. Could you explain what you think is most likely to happen to the PA’s bid for unilateral statehood at the UN?

NEUER: The UNSC will reject the request submitted by Abbas, possibly even without the need for a US veto because the PA request may fall short of winning the required nine affirmative votes. A separate request might then be made to the GA to give the PA an elevated observer status, as a non-member observer state. Given the Palestinian victory at UNESCO, we can assume the PA’s bid at the UNGA will yield the same result.

2. What are your thoughts on the UN general assembly having voted to grant the Palestinians full membership today? NEUER: On a day when Palestinians continued firing rockets against Israeli civilian centers, the United Nations sent the worst possible message about state responsibilities. If the PA wants to be a state, where is their assumption of minimal responsibility? The long-sought peace that the Palestinian and Israeli peoples so rightly deserve cannot be achieved by unilateral actions at the UN, but only by face-to-face talks. The UNESCO decision may be a victory for rhetorical point-scoring on the international stage, but it does nothing to help Palestinians resolve the real issues on the ground. It’s time for Abbas and the Palestinians to choose the path of Egypt’s Anwar Sadat and Jordan’s King Hussein and return to the negotiating table.

3. What if anything can or should be done to reform the mandate of UNWRA such that it’s purpose will be to resettle Palestinian refugees outside of Israel proper as opposed to promising them that they will be able to return to villages in that no longer exist within Israel?

NEUER: UNWRA is a weapon in the decades-old campaign of Arab dictators to scapegoat Israel by keeping the Palestinian grievance alive as an open wound. They don’t want to cure the problem. The Palestinians are being used as political pawns. In the year of the Arab Spring, we should open our eyes to the crude cynicism of Arab tyrants. Major donors like the US and EU states should call for change.

4. Ought the US and other Western countries that fund UNWRA, for example, require the change of textbooks taught to Palestinian children in UNWRA camps that delete the map of Israel, or fuel the conflict by promoting the right of return of Palestinian refugees en mass to Israel?

NEUER: Yes, the funders should demand basic accountability and education for peace instead of war, and that Hamas members no longer be hired as UNWRA teachers.

Editors note to readers: A recent produced film by David Bedein’s Centre For Near East Policy and Research entitled Palestinian Refugee Policy: From Despair to Hope,” reveals the UNRWA-Hamas connection in Gaza.

5. Could you comment on the most recent scandal involving Richard Falk? [Falk who is currently serving in the third year of a six-year term as the United Nations Special Rapporteur “on the situation of human rights in the Palestinian territories occupied since 1967” published the offensive cartoon seen here in this article on his blogg in late June. Notenote the Star of David on the Kippa of the blood-thirsty dog, peeing on the sword-toting Statue of Justice.]

NEUER: Richard Falk’s extreme political agenda and lack of credibility are well-known. Falk was condemned this year by UN Secretary Ban K-moon for being a leading supporter of the 9/11 conspiracy theory. Falk’s apologetics for Islamist terror also include his 1979 New York Times op-ed endorsing Ayatollah Khomeini as a democrat, and being so pro-Hamas that – as Falk himself revealed – the Palestinian Authority called on him to resign. It’s important that UK PM David Cameron recently condemned Falk for his publishing an anti-Semitic cartoon on his blog. Other EU leaders, including France and Germany, must now do the same.

6. What do you think the UN Human Rights Council ought to be doing regarding the situation in Syria right now?

NEUER: They should use all the tools in their toolbox to name and shame the murderers in Damascus: more emergency sessions, special investigators, and resolutions. Ultimately, though, only the UNSC can take concrete action-if only Russia and China would stop using their veto to protect Syrian dictator Bashar al-Assad.

7. What are the most serious issues that are neglected by the HRC due to it’s obsessive focus on Israel?