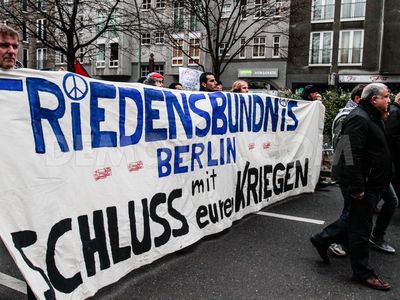 Omar Barghouti is a busy man, crisscrossing Europe and North America to shore up support for his worldwide campaign of boycotts, divestment and sanctions against Israel.

While the rest of the Middle East is up in flames, Barghouti and his band of professional agitators are obsessed with what they call the inequities of Israel, the only stable democracy and functional multi-ethnic and multi-religious society in the region.

Barghouti is a darling of the European far-left, but he still has an uphill task when it comes to dealing with wider public opinion in Germany.

A seasoned tactician, he understands the power of imagery. Picketing and obstructing shops that sell Israeli products generates imagery eerily similar to the German Stormtroopers outside Jewish businesses in the run up to the Holocaust.

The German public is still sensitive to such historical analogies.

This concern has not stopped Barghouti’s die-hard agitators from showing up at offices, shopping malls and trade fairs — blockading businesses and harassing shoppers. They were up to such antics recently, putting on a “show” at the international tourism convention ITB Berlin, erecting a fake ‘apartheid’ wall and this time calling for a boycott of Israel as a tourist destination.

With the radical Islamist bloc in Germany standing solidly behind his agenda, Barghouti is busy wooing German academia and the political Left.

He presents himself as the harbinger of the Good News to the “Marx-forsaken” arm-chair revolutionaries of Germany, who haven’t had a serious revolutionary “bash” since the late 60s.

In just one revolutionary package deal he offers the opportunity to fight “corporations”, “capitalism”, “racism”, “militarism”, “Western hegemony” and just about everything else that bothers this perpetually dissatisfied lot in the West.

The fact that these issues have nothing to do with Israel doesn’t dampen the mood of this one big inclusive anti-Israel slug-fest – where radical feminists, Flower-Power pacifists and militant anarchists get to march under the “exotic” flag of Hezbollah.

Politically, the anti-Israel campaign has excellent relations with the Left Party (Die Linke), successor of the infamous East German Communist Party (SED). Next on the campaign’s agenda is the Centre-Left Green Party.

Last year the fringe elements within the Green Party tried to use their party platform to raise questions over the labeling of Israeli products, but they quickly folded in the wake of strong protests from within and outside the party.

The Green Party leadership has categorically distanced itself from calls for boycotting Israeli made products.

The campaigners are working to overcome German inhibitions and yearn to call for open season on Israel someday soon. As Barghouti explains, unlike rest of the Europe, they are not “asking for the moon” in Germany, “not just yet”!

Seeing the current limitations on calls to boycott products from the disputed territories, however, the activists are focusing more on sanctions and divestment at the European Union level.

They are targeting investments, banking, culture, research and academics. They are making inroads into mainstream German political parties and using their clout within the framework of the European Union to influence policy and attitudes towards Israel.

They are actively engaged in Lawfare — using laws and regulatory systems of free societies in the West as weapons of war against their very own.

Barghouti and his Far-Left allies that otherwise heap all the inadequacies and ills of the world on Western civilization and despise its values to the core, do not shy away from using Western laws and institutions in their war on Israel.

Brooke Goldstein, the director of The Lawfare Project is aware of the vulnerabilities of legal and political institutions of the Western democracies to such vicious campaigns that run hostile to the very spirit of freedom.

“…the boycott movement against Israel is a product of Lawfare — the failure to uphold human rights law in the Middle East, it has justified advocates turning a blind eye away from egregious violators and focusing obsessively on Israel.

“Compared to any other nation state in history facing similar existential threats, rockets, suicide bombers, incitement to genocide from its neighbors, Israel sets the moral standard. Yet what fuels the boycott movement is the goal of delegitimizing the right of the Jewish state to self-defense and sovereignty.”

The grand tactic of discriminatory boycott against Israel is brutally simple. Anti-Israel campaigners know that in order to win, they don’t have to make a genuine case to the majority of the German public.

They just need to channel the misconceptions, prejudices and stereotypes of their receptive audience, a small but noisy minority. They just need enough committed trouble makers to intimidate and harass businesses, retail chains, investors and academic institutions to force them to reconsider their ties with Israel.

Their biggest ally of these political henchmen is the silence and inaction of the rest of the unsuspecting German and European society. Their narrative runs unopposed in media, internet, town halls, campuses and places of worship. They libel, malign and delegitimize Israel and go unchallenged – and are audacious enough to claim victory by default.

Not just the Far-Left, the vast majority of the freedom loving people of Germany are just as much part of this well-laid game plan. To succeed in their agenda the anti-Israel campaigners are counting on their complacency and inaction.