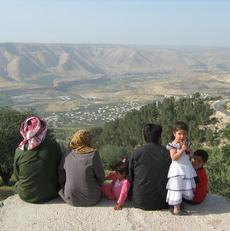 In Um Qais, a remote rather obscure Northern town of Jordan, made up of approximately 5000 Moslems, I met a Jordanian man named Hammad (not his real name) who, like everyone else in the town I encountered, would not say the word “Israel.”  Instead when we first met, Hammad, who did not know I was Jewish, referred to all of the land west of the Jordan River only as “Palestine”. And yet, after a long conversation, Hammad began to realize that it might actually be in his interest to adjust to the reality of Israel, which is why I found our conversation so fascinating.

The town of Um Qais where Hammad lived is perched up high on a hilltop with breathtaking views of Israel’s Sea of Galilee, the Golan Heights and the gorge of the Yarmouk River (dividing Jordan from Syria) and is very close to the ancient town of Gadera, where there is an expansive archaeological site.

Hammad was university educated and worked in Jordan’s tourism industry and we sat together with my Canadian friends (also Jewish) one evening drinking Turkish coffee  at a restaurant at the archaeological site of the ancient town of Gadera.  Hammad referred to the Sea of Galilee as “Lake Taberiyyah’ (Tiberius Lake) in “Palestine” and told me wistfully that “before the occupation in 1948, my father and uncle used to travel back and forth with their caravan of camels from Taberiyyeh to Um Qais.” They had done this when the land formed part of the British mandate of Palestine, and before that the Ottoman Empire. Of course, since the “1948 occupation” which I refer to as the founding of Israel, Hammad and his family could look out and see Lake Taberiyyeh but they could no longer ride down on a camel or take a swim there.

As Hammad repeatedly referred to this area as Palestine, I didn’t bother pointing out to him that Tiberius and the Sea of Galilee were included as part of the future Jewish state as early as the British Peel Commission in 1937 and the UN partition plan of 1947. I (having taken off my Chai necklace and not brought it to Jordan) didn’t even raise the fact that Jordan and Israel had signed a peace agreement in 1994. None of these developments had registered with Hammad, who continued to refer to everything as Palestine.

Hammad pointed out with frustration, the town of Um Qais is essentially land locked. “If I want to swim in a sea, I have to drive 8 hours down to Aquaba (the Jordanian town across from Eilat) to swim. I never get there,” he said.

Hammad complained that notwithstanding the fact that the ancient town of Gadera has very impressive ruins and was one of the most significant ancient Greco-Roman cities of the Decapolis, very few Western tourists came to see it. (Note: Gadera is also an important Christian site as according to the New Testament, it is the spot where Jesus  cast out the Devil from two demoniacs (mad men) into a herd of pigs (Mathew 8:28-34).)

“But all the tour groups to Jordan only stop in Petra and Jerash, and none of them take tourists up to see Um Qais. They say we are too far away. They don’t spend an extra day in the country to see Gadera. We miss out on all the foreign tourists,” Hammad explained, between his sips of Turkish coffee

Hammad was correct in his assessment that the site warranted far more tourists than it got. The  ancient town of Gadera , which had once been the choice resort for Romans vacationing in the nearby Hamat Gader hot springs (located in Israel since  1967) was built on a truly grand scale, laid out against a splendid backdrop of the Golan Heights, the Sea of Galilee, the mountains of  Lebanon, and the Yarmouk River. At night with lights lit up, I was able to see the outlines of Mount Tabour, the highest mountain peak in the Galil in Israel.

If Western tourists were to be bused up to visit Gadera, Um Qais could have easily developed more than the basic rent room and hotel, which certainly had vacancies. But it was a far enough ride that it was not likely to occur.

To Hammad’s shock, I responded that given Um Qais’s geographic location, the best tourists for the town logically would be Israelis who lived in Tiberius and around the Sea of Galilee. They could easily go to the northern Israeli town of Beit Shean, where the border crossing to Jordan was, and rent a car and come stay in Um Qais for the weekend. Israelis were Um Qais’s closest neighbors. I told Hammad I was sure that many Israelis would be very curious to see the outstanding view of the area, and the archaeological ruins. The prices were also very reasonable. It would be cheap for Israelis to come to Um Qais and explore. I went so far as to suggest to Hammad it would make sense for him to make up an English and Hebrew brochure and place them in hotels around Tiberius advertising the idea of coming up to Um Qais to see the archaeological ruins.

Hammad was taken aback with this ‘out of the box’ suggestion, and he had certainly never considered that the tourism potential of Um Qais was inextricably tied up with tourism from Israelis. His eyes shifted back and forth as he tried to digest this unheard of suggestion. It was as if I had turned his whole world upside down. He fell silent, too stunned for words.

“Of course, Hammad, this would mean that you’d have to be willing to use the word Israel, and you’d have to want to have Israelis come here as tourists. And you couldn’t keep telling Israeli Jews that Lake Tibberyah was “Palestine.” You’d have to accept the fact that there is a State of Israel and that Israelis are your neighbors,” I continued.

Hammad was still quiet, realizing that in fact that Israelis living in the Galil were the most untapped tourist potential for Um Qais.

A wide eyed Hammad responded that he would never go there (he meant Israel but wouldn’t say it). When I asked why, he responded, “It’s dangerous there. I would get shot at.”

Smiling, I told Hammad that I didn’t think that any Israeli Jews would shoot him if he went to Tiberius in Israel and began trying to promote excursions to Um Qais. On the contrary, I told him I thought they would be happy to see him.

“If you invited some Israelis in the tourism industry up here, they’d probably come,” I told Hammad.

I mentioned that when we had crossed the border from Beit Shean Israel into Jordan, I had noticed that the border parking lot was completely filled with Israeli cars (since one cannot drive an Israeli car into Jordan). “Lots of Israelis are already coming into Jordan, probably mostly to Amman. They just aren’t coming here, because they have no idea about the Ancient town of Gadera.”

My friends and I mentioned that Israeli archaeologist would be interested in seeing Um Qais. (We repeated the word “Israelis” since we had already encountered a shopkeeper in the ton who said that Jews but not Israelis could come to Um Qais, a distinction that rejects the Jewish people’s right to a homeland)

My friends asked him if he was curious to see Jerusalem. One day wouldn’t he want to go and visit there.

Hammad was stupefied. We continued the conversation with Hammad for some time.

By the end of our conversation even though he wasn’t using the word “Israel” Hammad had also had stopped referring to Israel as “Palestine”.  Although he never asked if we were Jewish, I think he may have suspected we were

When I left Um Qais, I didn’t really think that our conversation had any effect on Hammad.

But, we were truly surprised when a few days later my friends received an email from Hammad that he wanted to come see Jerusalem. He asked whether we could help him get a visa to come to Israel. (But we were soon leaving Israel and couldn’t help him). Clearly, our conversation had had some sort of effect on him.

[The above conversation took place in the spring of 2008, long before the development of ISIS. I have no doubt that there are those in Um Qais who support ISIS or the Moslem Brotherhood.  I do wonder what Hammad thinks, and whether today he supports ISIS or other Moslem extremists or whether he wants King Abdullah’s regime to survive. Of course, given current developments in the region, Israelis are not likely to be going to Um Qais any time soon. By the spring of 2014, Israeli media was reporting that Jordan was denying tourist visas to unaccompanied Jewish Israeli tourists who had not organized a Jordanian guide in advance of their trip. Jewish Israelis could only enter as part of an organized group accompanied by a Jordanian policeman.

By 2012, Israeli media reported that the Jordanian Tourism Ministry was telling Israeli tourists not to wear kippahs or other clothing that would signal they are Jewish, or take part in Jewish religious rites publicly while in the country, according to a letter sent by the Jordanian Tourism Ministry and Antiquities to tour guides in the country recently.] Jordanian teen selling date palm leaves at the Um Qais site. I bought one and still have it
photo by Rhonda Spivak A Jordanian soldier at the outskirts of Um Qais manning the area looking out to the border with Syria.
photo by Rhonda Spivak the Roman amphitheatre in Um Qais
photo by Rhonda Spivak The archaeological site of Um Qais
photo by Rhonda Spivak The cardo, which gives a sense of how extensive the ruins of Um Qais are.
photo by Rhonda Spivak