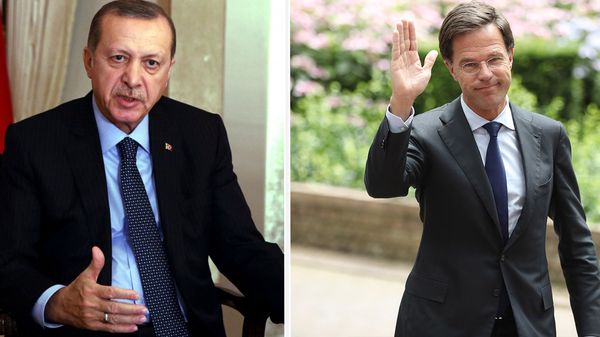 Sometimes it’s a good idea to take a step backwards, look at reality from a distance, and see the larger picture, taking in the whole forest rather than just the individual trees. If we attempt to review what has been going on in the world since the British decision to leave the European Union and since Donald Trump’s November 16th election victory, it is just possible that the picture emerging is that of a West beginning the fight against Islam after 8 years of submission disguised by a fragile mask of political correctness.

A not insignificant number of factors add up to a wide and inclusive picture: the fact that it is now permissible to say the words “Islamic terror” in the USA, the attempts to limit Muslim immigration to that country, Trump’s decision to finish off ISIS, the strengthening of rightist parties in Europe, the unsuccessful but serious possiblity that Geert Wilders might have been elected in Holland, the discovery of a gigantic weapons cache in Spain – these are only a small example of the issues that have been part of public discourse over the last few months.
kingroot apk
It seems that the West has decided to wake up and shake off the Muslim takeover of the public and political agenda. More and more anti-Islamist phenomena are being seen in Europe and America, those called “Islamophobic” by Muslims and their support groups, who define them as irrationnal fears of Islam and Muslims. Opponents of Islam are not only members of shaven-headed gangs, neo-Nazis, tattoo-covered beer drinkers, but ordinary people, upstanding and honest citizens, who have become seriously anxious about what is happening in Europe and the USA.

They observe the cultural change flooding Europe with troubled eyes, noting the immigrants, many of whom come to live off government benefits, the increase in violence, the abusive and negative attitude towards European women in particular, the damage to the younger generation. The average European is very disturbed by Muslim women’s face-coverings, he sees that custom as a cultural red line. Western culture is based on revealing oneself in interpersonal contacts and covering one’s face contradicts this basic premise. In the West’s perception of things, those who hide their faces are criminals – like bank robbers or murderers with face masks – and this is the reason for the instinctive dislike Europeans have for seeing Muslim women wearing face-coverings in public places.

A good many Europeans have developed intense antagonism towards Islamists because of the behavior of some Muslims, mostly young ones, in the public space: noise, wild driving, male and female Islamic apparel, street prayer, mosque construction, muezzin calls to prayer in the middle of the night, burqinis at the beach and swimming pools, media reports of bigamy and polygamy among the immigrants, honor killings of girls and women, influences on school curricula and the food served to  pupils – and much more. Each one of the items listed above might have passed without making waves, but the combination of all of them draws a worrying impression of an alien culture that is increasingly threatening to overpower the West’s culture and way of life.

What can be observed in Europe and the USA today, is a counter-reaction, perhaps the shaking-up of a Western society which has succeeded in removing the mask of political correctness and has set out to battle this troubling development, in an attempt to recover its Western lifestyle, character and the once dominant public expression of that lifestyle. Will this necessarily lead to violence? Maybe not, but what not a few Muslim immigrants are about to discover is that Western socities are changing their attitudes to Muslim immigration and to Muslim demands whose purpose is the creeping Islamization of the European environment.

Holland as a test case: Enough of Erdogan

The background to what is happening today between Holland and Turkey is to be found in over 400 years of diplomatic relations between the two countries; Holland is one of the largest investors in the Turkish economy; over 2000 Dutch companies function in Turkey; trade between the two countries surpasses 10 billion dollars annually and at least a million Dutch tourists visit Turkey every year. At least 400,000 Turkish citizens, 2.5% of the Dutch population, live in Holland. Sounds good, even great, so  far.

But what is happening now is the result of long years of European submission to Erdogan’s outlandish behavior, his impulsivity, crude manners and speech, and his flooding Europe with Syrian refugees and other, mostly Muslim, migrants. The Dutch were the first to protest, but the dispute has spilled over into other European countries.

The last round of bad blood between Turkey and Europe began a few days ago, when Erdogan attempted to send government ministers to Europe to encourage the millions of Turks living in Europe and who have the right to vote in Turkey, to endorse the changes in Turkey’s constitution that will strengthen his position. He intends to turn Turkey into a country where the president is not simply a symbolic figure as Erdogan is supposed to be today, but an executive holding the reins of the legislature, on the lines of the USA.

Holland is going through a process of reflection, one that has strengthened the radical right and its leader, Geert Wilders. A short five years ago, he was considered an untouchable racist, but recently, he became a serious candidate for leadership of the country. The Dutch have realized, somehwat belatedly, that their warm acceptance of Muslim migrants turned their country into a preferred destination, and are turning solidly to the right, trying to backtrack and save their homeland from an ever-growing Islamic invasion.

Despite the tense atmosphere and this growing anti-Islamism, Erdogan – head of an Islamist, Muslim Brotherhood-style party – decided to send his ministers to Holland in order to achieve even more power for himself. Did he go mad? Not at all, he simply doesn’t take Europeans into account in the slightest, has ignored them for years with impunity – after all, they let him get away with whatever he wanted to do from the day he gained power in 2002. The Dutch have decided that they have had enough of this and refused to allow  the Turkish ministers to enter Holland and speak to their voters. The ministers’ intention, it should be stressed, was to reach the industrial port city of Rotterdam, which has a Muslim majority.

Erdogan was insulted personally, as it suddenly appeared that the Dutch have their own will, and even worse, a sense of self-worth! They actually refused to continue their obeisance to the Sultan! They refused to allow the plane bringing the Turkish foreign minister to land in Holland and stopped its family minister’s car at the border. They were unimpressed by Turkey’s threats of economic sanctions and the preventing of Dutch airlines from landing on Turkish soil. Erdogan compared them to Nazis and fascists, although Holland was a victim of the Nazis. At this point, the weapon chosen by both sides is that of recalling ambassadors.

Holland is not alone: Germany, Denmark, Austria and Switzerland do not support Erdogan’s desire to become all-powerful, and have also applied limitations to the arrival of his spokesmen to their territories. Erdogan is now calling for international bodies to punish the Netherlands.

Are we witnessing the beginning of a struggle for the soul of Europe, fought between the newly-strengthened Right and those trying to effect an Islamic takeover?

Is this the beginning of a change in the process of Europe’s Islamization?

Does Europe have a European future?

Time will tell, as will elections, but along with the political and public struggle, it is worthwhile for Europeans to consider having children. Without more children, the Europeans are marching proudly towards becoming a museum exhibit.

Written for Arutz Sheva, translated from the Hebrew by Rochel Sylvetsky.