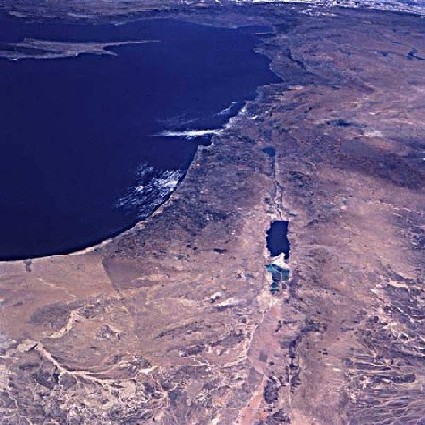 We often hear Arab-Moslem propaganda claim that Palestine was their country till the United Nations gave a gift to the Jewish survivors of the Shoah–at the expense of the Arabs- to occupy Palestine and establish in it the Jewish state.

The facts are that not only was Eretz Yisrael a Jewish country for over a thousand years prior to the Roman occupation (as well as 1900 years afterwards)  but even after the first and the second Jewish revolt  against the Romans ( the last being the Bar Kochbah rebellion) in which more than a million Jews were either killed or exiled from the Land but which at least left from one to three hundred thousand Jews in the country, scattered in various towns and villages, with the bulk living in the Galilee. Till the seventh century Jews together with many Greek pagans and Greek lived Christians lived in the Land but no Arabs or Moslems. (Indeed, Islam did not yet exist during those years.)

As proof of the Jewish presence especially in the Galilee- in the second as well as the third and fourth centuries- we find rabbinical giants living there such as Yehudah Hanasi, the compiler of the Mishna, who lived in Tsipori.  The Jewish character of the Galilee even had a bet din as well as at least one if not more yeshivot.   After compilation of the Mishna, the rabbinic Sages of the Galilee compiled the multi volume work known as the Jerusalem Talmud (circa 450 C.E.) though it never was studied throughout the centuries as much as the more popular and more complete Babylonian Talmud.

Another important rabbinic decision of Galilee rabbis during those centuries was that of a Rabbi Hillel who abolished the old system of waiting for witnesses to appear before a bet- din who had to testify that they saw the new moon in order for the bet- din to announce when a new month and a holyday would begin.   From those years in the Galilee all Jews wherever they live follow Rav Hillel’s  set calendar so that every person now knows when there will be  a new month and when a holyday will begin.

Archeologists have also found many synagogues dating from this period in various parts of the country which are additional proofs that there were Jewish communities in these locations, not only in the Galilee but in other locations throughout the country including even in the Golan Heights.

The fortunes of the Jews in the land changed for the worse when the Roman Emperor, Constantine, converted to Christianity with the result that Jewish life under a Christian regime worsened and things did not improve for the various Jewish communities till the Moslem conquest of the Land in the seventh century.  Under the Moslems Jews were even permitted to return to live in Jerusalem after 600 years.   Also during these three centuries when the Moslems were in control the Hebrew Bible was edited and given vowels –which simplified the reading of the Torah-by a group of Jewish scholars and scribes in Tiberias called Masoretes.

The coming of the eleventh century unfortunately, witnessed the infamous Christian Crusades organized in Western Europe in 1096 C.E. which aimed at retaking  the Holy Sepulcher –which Christians believe was the burial site of Jesus in Jerusalem- as well as the rest of the Holy Land from the Moslems.  Both Jews and Moslems fought against the Christian invaders but were defeated by the Christian armies who then began a mass slaughter of Moslems and Jews especially in the Jerusalem area.

The situation in the Holy-Land again changed after 88 years of Christian dominance when the Moslem leader Saladin defeated the Christian armies in the Battle of Hattim; a new situation which forced the Christians to retreat from all their earlier conquests and left them only with the city of Acre.

Another turn in fortunes took place after Saladin’s death when a new group of Moslem conquerors, the Mamluks, controlled the country and introduced laws which were aimed at identifying and degrading and exploiting both Jews and Christians.  However, these policies did not bar Jews from coming on Aliyah.  One of the most famous Olim during this period was the 13th century scholar from Spain, Ramban (Nachmanides) who inspired many rabbinical scholars to join him in Eretz Yisrael.  Ramban used to travel around the country to visit many Jewish communities and helped them establish some yeshivot in central and Southern Eretz Yisrael.

In 1516 there was again another change of rulers when the Turks conquered Palestine from the Mamluks and though the Turks were Moslems they were liberal toward non-Moslem inhabitants when compared to the Mamluks.  That the Turks were now in control of the Land was especially fortunate for the Spanish and Portugese Jews who found a haven here after their expulsions from the Iberian penninsula.  During the Turkish era not only did many individual Jews come to live here from various countries but many rabbinic scholars chose to live in the town of Safed in the upper Galilee.  Not only did Safedin the 16th century  become a center of Jewish learning and scholarship  but many of the customs which developed here later spread throughout the Jewish Diaspora such as the recitation of the six Psalms and the lovely Lecha Dodi poem which were added to our Friday night Shabbat service.  Sixteenth Century Safed, also became the center of both Jewish mysticism (Kabbala) as well as Yosef Karo’s halachik work, the  Shulchan Aruch.   Rabbi Cordevero and the Ari, who either lived or spent many years in Safed, were the most popular mystics of their day.

During the 18th century many of the disciples of the  Vilna Gaon and the followers  of the Baal shem Tov  came to live in Eretz Yisrael and study Torah in Eretz Yisrael and were happy to be able to  observe mitzvoth which could only be observed in this Land.  Among the Hassidim was one of my ancestors, Rav Gershon of Kitov, who was the brother in law of the Ball Shem Tov and who came on aliya about 300 years ago; he  was the chief rabbi in Hebron and later moved to Jerusalem where he founded a yeshivah within the walls of the Old City. He is buried on the Mt. of Olives Cemetery.

If what was mentioned so far is insufficient proof of the eternal connection of Jews to the Land of Israel we can also add the various movements to Zion in the nineteenth and twentieth century which witnessed the building of Jewish towns and villages as well as cities such as Tel Aviv.  All these facts should disprove the lies promulgated by the Arabs and Moslems when they claim that Palestine was only given by the UN to the Jews as compensation for the death of the six million murdered by the Nazis.