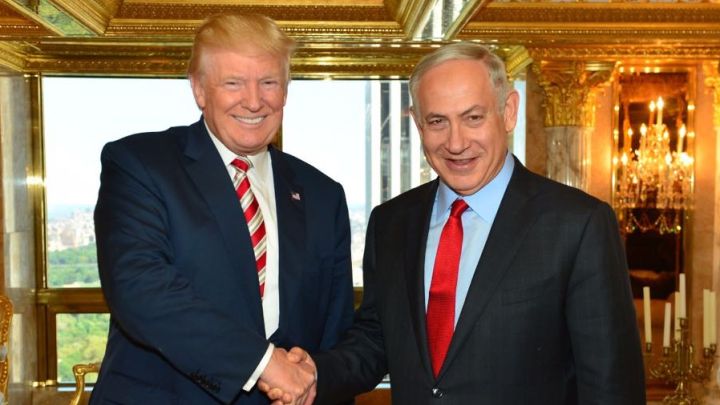 To edit and correct a scientific model one must make predictions and see how close to reality they come. This is why, before Donald Trump took his oath of office, we made public in Foreign Affairs our predictions concerning his policies (Part 1). We have found a consistent and traditional US policy to strengthen jihadism generally and Iran particularly, and to undermine Israeli security (Part 2); so we predicted, based on that, that Trump would do the same. Our conclusion:

“We suspect that, though the discourse will be different, Trump’s policies in the Middle East will be quite similar to Obama’s.”

After Trump became president, and shortly before his summit with Israeli prime minister Benjamin Netanyahu, Vox seemed to call out the president’s true colors. His proposals, this publication commented,

“echo the past two administrations. Trump has now said settlements aren’t helpful for Mideast peace; made clear that the embassy move won’t happen anytime soon, if at all; and given no indication that he was actually prepared to walk away from the nuclear pact and reimpose sanctions on Tehran. The Trump White House’s position on Israel, in other words, has emerged to look a lot more like a diluted version of Obama’s…”[0]

This, said Vox, “has… befuddled many here [in the US] and in Israel.” And this is without mentioning that the Trump administration’s commemoration of the Holocaust omitted any mention of the Jewish people, something that is difficult to interpret except as a deliberate and joyful insult.

It all squares nicely with HIR’s predictions (we are not befuddled). But following the summit between the US and Israeli heads of state, many now see Trump taking a ‘pro-Israeli’ turn. Why?

At that summit, Trump declared that he would accept, should the parties agree to it, a ‘one-state solution.’ This implies Israel’s annexation of Judea and Samaria; put differently, it implies that PLO/Fatah (what we now call the ‘Palestinian Authority’) would no longer receive these territories to govern as a separate state. This is interpreted as ‘bad’ for PLO/Fatah and therefore as ‘good’ for Israel.

But to me this looks like the ol’ fast one. When young, another kid once pulled this on me to resolve a conflict of interest: he flipped a coin and announced: “Heads, I win; tails, you lose.” He showed me the coin: “It’s heads. I win.” It seemed fair (it went by fast).

The trick played on Israelis has the same structure, but it depends less on speed than ignorance. Common Israelis—as I found myself when I traveled to that country—have zero knowledge of certain key historical events; for this reason, they cannot really hear what they’ve been told: “Heads, Iran wins; tails, you lose.” If the outcome is a ‘two-state solution,’ as Obama and his predecessors wanted, or if it is ‘a one-state solution,’ as Trump now imagines out loud, it is always the Iranian ayatollahs who win—the same who promise to exterminate the Israeli Jews.

To explain all that, I wrote the article which I translate and reproduce below, published in the Mexican newspaper El Universal.

The political summit is a stereotyped ritual with a standard script: the bosses have a chat, they go to the microphones, they make statements. The media then interpret. They seem to share information with the public—and it’s packaged that way. But the public never hears the historical context. To interpret the recent summit between Donald Trump and Benjamin Netanyahu, we need four historical facts that are usually omitted.

Let us begin with the statements. Trump said that he supports Israel and will make an effort to negotiate ‘peace’ between Arab Palestinians and Jews in the Middle East. This is utterly traditional—obligatory, even—and every president says it. But Trump let on that he doesn’t care whether all that bargaining produces two states in what is now Israel, as his predecessors insisted, or just one. The second option would imply the Israeli annexation of Judea and Samaria (the ‘West Bank’). This is new.

How to spin it? The New York Times, as usual, will give the most influential interpretation. This newspaper comments that “Palestinian leaders lamented Mr. Trump’s stance, seeing it as an abandonment by the United States, which has been the main patron of the Palestinian Authority.”[1] By publicly imagining the possible annexation of Judea and Samaria, the Times suggests, Trump has taken an ‘anti-Palestinian’ or ‘pro-Israeli’ turn.

Does this interpretation have merit? Let us have the four facts.

The first one was splashed, in 1979, on the cover of the New York Times, no less, but today hardly anyone knows it because, since then, neither the Times nor anybody else has seen fit to mention it again: PLO/Fatah—called today ‘Palestinian Authority’—was the godfather of Iran.

You read correctly. Yasser Arafat and Mahmoud Abbas, eternal leaders of the terrorist group PLO/Fatah, armed and trained Ayatollah Khomeini’s guerillas. They were also the first foreign dignitaries to deplane in Teheran, in 1979, to celebrate with Khomeini the revolution. Right away, they helped to create the Iranian secret police (SAVAMA) and the Revolutionary Guard (creator of Hezbollah and guardian of the regime).

Arafat and Khomeini announced their joint goal: to export the Islamic revolution and to destroy Israel. To achieve the latter, as Abbas explained to Arab reporters in Teheran, PLO/Fatah had developed the ‘Plan of Phases’: promise ‘peace’ in order to gain entry into Israel (first phase); then, with Iran’s help, destroy the Jewish state (second phase). This would soon be called—with Orwellian cunning—the ‘Peace Process.’

Is the plan still running? Make way for the second and third facts.

In August 2015, while US and Iranian negotiators finalized the line items in their nuclear treaty—which neglects to inspect certain Iranian military installations, but doesn’t neglect to unfreeze tsunamis of money for the ayatollahs—Iran signed with PLO/Fatah an “all out cooperation” agreement.[3] To cooperate in what? There is hardly need to speculate: in public, at least once a month, the Iranian ayatollahs promise to exterminate the Israeli Jews.

In light of these historical facts, it is obvious that the hallowed ‘two-state solution,’ much favored by previous presidents, is anti-Israeli, for it proposes that Judea and Samaria—territories that a 1967 Pentagon study declared indispensable for Israeli survival [4]—be separated from Israel and given to PLO/Fatah. In other words, to Iran.

But in the summit Trump said that he was willing to support a ‘one-state solution’: the annexation of Judea and Samaria. This is interpreted as a ‘pro-Israeli’ turn. Does that make sense? No. In this ‘solution,’ PLO/Fatah—in other words, Iran—settles itself indefinitely inside Israel.

There is no pro-Israeli turn. Take it from Obama’s hand or take it from Trump’s; either solution is a Final Solution.

What would real support for Israel mean, then? This: a demand that PLO/Fatah—in other words, Iran—be expelled from the Jewish state. (This would also be support, by the way, for the Arab Palestinians, today enslaved by PLO/Fatah, and waiting to be turned into Iranian suicide bombs.)

I can already hear the objection: “But Netanyahu seemed so happy with Trump’s statements! Doesn’t that mean that Trump’s policies are pro-Israeli?”

Absolutely not. To reason this way is to make political science impossible. Netanyahu’s patriotism cannot be assumed a priori. We must evaluate the import of his policies by considering the—mostly unknown—facts that we are reviewing here, and then, supported by that analysis, evaluate his patriotism. Netanyahu’s posturing and speeches are neither here nor there; actions speak louder than words.

This is underscored by the fourth and last historical fact (which, again, nobody remembers): it was Netanyahu himself who brought PLO/Fatah—in other words, Iran—into the Jewish state. You read correctly.

Don’t worry. I shan’t deny that Yitzhak Rabin and Shimon Peres signed in Washington, in 1993, the Oslo Accords with Yasser Arafat and Mahmoud Abbas. That’s what happened. But that agreement would hardly have happened without the negotiations of the previous Israeli government at the Madrid Peace Conference of 1991.[5] There, the sacred taboo of Israeli politics, which forbade any negotiation with PLO/Fatah, was for the first time violated.[6] The pioneer responsible for this, much feted at Madrid, was the Israeli deputy foreign minister. His name was Benjamin Netanyahu.[7]

Francisco Gil-White, professor at ITAM, is author of
The Collapse of the West: The Next Holocaust and its Consequences.

So far, everything matches the predictions of the HIR model. A pro-jihadist and anti-Israeli policy now running for almost 40 years is being continued forward in the Trump administration, despite contrary appearances promoted in public discourse.

But all of this motivates a question: How can this have been going on for so long? Why does the democratic process—the alternation in power of the two main parties—not affect such a consequential policy?

That will be the topic of our next article.