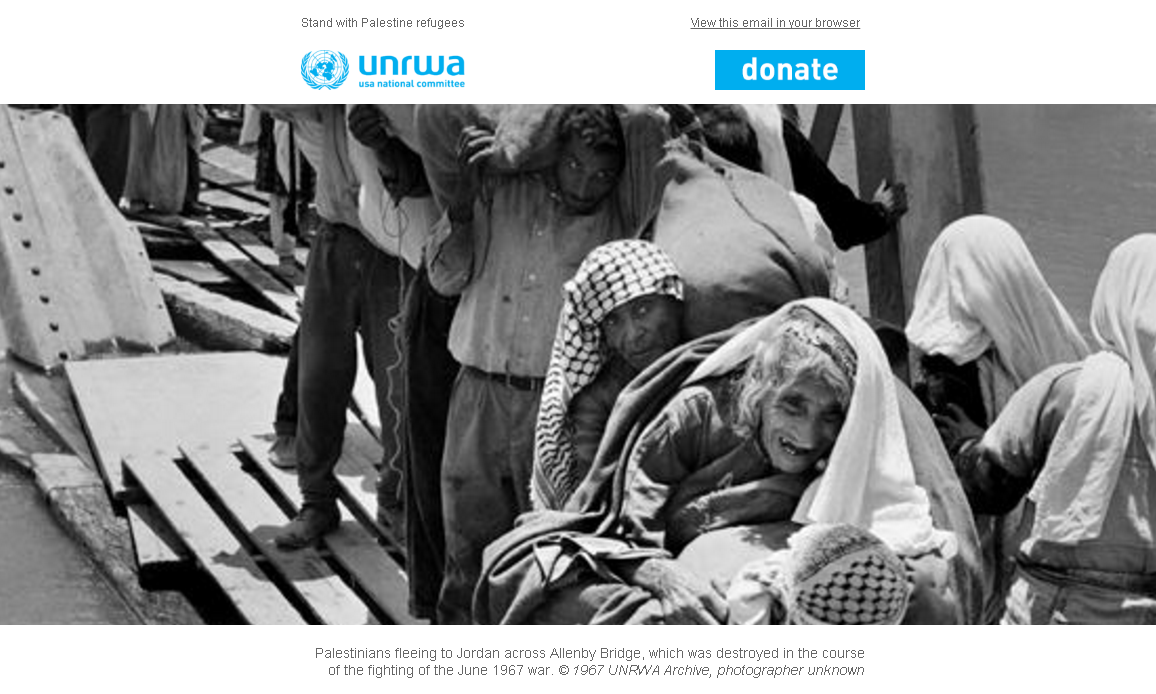 I received this email from UNRWA-USA, entitled “50 years of occupation. Still refugees.”

This week marks a devastating anniversary for Palestinians: 50 years of the occupation of the West Bank including East Jerusalem, and the Gaza Strip.
In 1967, UNRWA had already been providing services to Palestine refugees displaced by the Nakba for 17 years. The Naksa — the new wave of displacement caused by the June 1967 war and subsequent Israeli occupation of the West Bank and Gaza — warranted the establishment of 10 new refugee camps, and UNRWA expanding its services to newly displaced Palestinians in need. Refugees still live in these camps today.
Please continue to stand with Palestine refugees.
For decades, generations of Palestinians — refugees and non-refugees — have persevered as their land is confiscated, their families separated, and their rights repeatedly violated. UNRWA will continue to stand with Palestine refugees, no matter what, until they receive a just and durable solution to their plight.
Today, and every day, we remember those, still refugees, living under an occupation that becomes more entrenched every day. We honor them as they continue to hope for a brighter future.

It’s funny, because in 1967 these “refugees” were in camps in Jordan and Gaza, under foreign control. Today they are in camps in the West Bank and Gaza under the control of their own people. They are no worse off from the “occupation” than they were under Jordanian occupation; in fact their lives are markedly better in the West Bank (and in Gaza, the only reason things are worse is because of Hamas, not Israel, which tried to build houses for them and got a UN resolution condemning Israel for that desire.)

Now they have hospitals, universities, far improved health care and far better jobs for the most part compared to 1967. Yet UNRWA wants to make it sound like it is Israel that is making their lives miserable.

Most egregiously, UNRWA is skirting the main question: Why are they still in “refugee” camps, UNRWA? They live in “Historic Palestine!”

Yet UNRWA-USA knows that to the anti-Israel drones who support it, there is no more magical word than “occupation.” It conjures horrors unheard of since the Spanish Inquisition.

UNRWA doesn’t want the world to know the truth – that it is simply a self-perpetuating bureaucracy that should have been dismantled in the 1950s. If that would have happened, the majority of people who claim to be Palestinian today would be in much better shape because the Arab nations would have been forced to take care of them instead of fobbing them off to the UN.

There is literally no reason to keep Palestinians in “refugee” camps in the West Bank and Gaza (and Jordan, where most of them are citizens)  – except to use them as cannon fodder to eventually destroy Israel. UNRWA feeds them the myth of “right to return” in schools and they happily consume it.