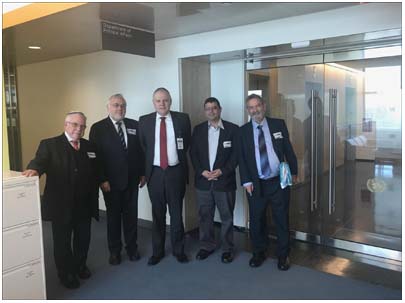 Unless UNRWA Removes These Books, US and other Donor Nations Should Defund UN Agency’s Educational Budget

“Instead of preparing the next generation for a Two-State solution, living in peace alongside Israel, new Palestinian textbooks, including many used in UN schools indoctrinate violence, denial, deceit, and demonization of the Jewish people,” Rabbi Abraham Cooper, Associate Dean and Director of Global Social Action for the Simon Wiesenthal Center, a leading Jewish NGO charged.

The Wiesenthal Center helped fund a comprehensive new study of 150 Palestinian textbooks used on the West Bank and Gaza including those provided to UNRWA, the UN agency that provides educational and social services for Palestinians. The study, by the Center for Near East Policy Research, was presented to a senior official at UN headquarters in New York as well as to US Congressman Doug Lamborn (R-CO) on Capitol Hill. The books deny that Jews have any holy places in the Holy Land – the Western Wall in Jerusalem, the Cave of the Patriarchs in Hebron and Rachel’s Tomb in Bethlehem are all depicted as Muslim holy places threatened by Jews. These textbooks in UNRWA schools teach that Israel has no legitimacy as a state, “a clear violation of the UN’s own rules,” Rabbi Cooper added, continuing,”Deeply troubling is that the name Israel has been virtually erased from the newest books. It’s replaced by ‘Zionist occupation’ and Arab-Zionist conflict’. Poems taught to youngsters praise ‘martyrdom’ against Jews.”

“The Wiesenthal Center had brought up these issues months ago with UN Secretary General Guterrez. Now Dr Groiss has submitted 262 pages delineating a curriculum which prepares the next generation of Palestinians, not for peace, but for more conflict, more violence, more Jew-hatred. If UNRWA doesn’t change course then the US and other major donor nations should defund its educational budget.

“This study should also serve as a guide to the Trump Administration as it seeks new roads towards Middle East peace. All its diplomatic moves will be doomed to failure unless the Palestinian leadership stops brainwashing its children to loather their Jewish neighbors,” Rabbi Cooper concluded.

Read report here: Schoolbooks of the Palestinian Authority (PA), The Attitude to the Jews, to Israel and to Peace