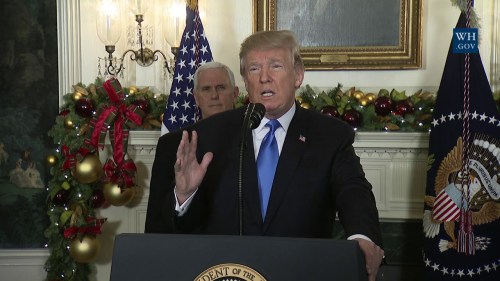 The U.S. recognition of Jerusalem as the capital of Israel overturns American policy dating back 70 years and entails several immediate results, some of them declarative and some also practical:

Burial of the UN Resolution to Internationalize Jerusalem

Trump put paid to the notion of “internationalization,” which the United States had not officially renounced since November 29, 1947. That same day, of course, the UN General Assembly adopted Resolution 181 on dividing the Land of Israel between the Jews and the Arabs. The partition resolution stated, among other things, that: “The City of Jerusalem shall be established as a corpus separatum under a special international regime and shall be administered by the United Nations.”

According to the United Nations, the boundaries of Jerusalem then also encompassed the city of Bethlehem, and the internationalization of the city was to be in place for 10 years. However, it was never implemented. The outcomes of the Israel’s 1948-49 War of Independence and the division of Jerusalem between Israel and Jordan turned internationalization into a dead letter.

Until the “recognition speech,” the United States had never officially renounced internationalization while giving most of the emphasis in its policy to repeated statements that Jerusalem’s status would be determined in negotiations between the sides. Now that Trump has recognized Jerusalem as Israel’s capital, internationalization has become, from the U.S. standpoint, irrelevant history.

Plans for Dividing the City – In Deep-Freeze

Trump’s speech puts into deep-freeze the audacious plans for a division of the city, which were on the negotiating table during the tenures of Prime Ministers Ehud Barak and Ehud Olmert.

Barak and Olmert were prepared to divide Jerusalem, and two U.S. administrations, that of Bill Clinton and George W. Bush, were intensely involved in mediating between the sides and encouraging them to adopt such a plan in the hope of achieving peace. The countries of the European Union also took part in the negotiations on dividing Jerusalem at different stages.

In the wake of Trump’s speech and his recognition of Jerusalem as Israel’s capital, the chances that during his tenure such plans will again be broached are low.

Until Trump’s speech, the United States did not recognize either west or east Jerusalem as Israel’s capital, even though presidents, secretaries of state, and American diplomats were regularly hosted in the western part of the city.

Trump’s speech did not distinguish between west and east. He referred to Jerusalem with all its parts as a single unit. At the same time, the speech made clear that the United States does not necessarily regard the current borders as sacrosanct, or as the president himself put it: “We are not taking a position on any final status issues, including the specific boundaries of the Israeli sovereignty in Jerusalem or the resolution of contested borders. Those questions are up to the parties involved.”

Formal Recognition of the Reality of “One Jerusalem”

Trump again mentioned the Jewish people’s historical bond to Jerusalem, while also emphasizing his awareness of the current reality in the city.

The alley of the Western Wall has become a huge plaza. After many years, Jews can now visit the Temple Mount. The U.S. president now, in effect, recognizes all these places, along with the network of infrastructures, national parks, and governmental and national institutions that have been built in the added parts of Jerusalem – including on Mount Scopus, where Hadassah Hospital and the Hebrew University were re-established after 1967. In Atarot to the north, the Atarot Airport was put to use (and later closed). Numerous archaeological digs have been conducted in all parts of the city, and Jerusalem’s glorious past through the ages has been revealed.

All of this – along with, of course, the older reality in the western part of the city, where the government offices, the Knesset, the president’s residence, and the Supreme Court  are located – the United States now recognizes as part of “Jerusalem, capital of Israel.”

Trump’s recognition of Jerusalem as Israel’s capital will purportedly change the State Department’s practice regarding the passport registration of American citizens born in Jerusalem. To this day, when an American is born in Paris, it is registered in his/her passport that the place of birth was in “Paris, France.” When an American is born in Tel Aviv, place of birth in the passport is recorded as “Tel Aviv, Israel.”

What Is Missing from the American Recognition of Jerusalem as Israel’s Capital?

There Are No Free Gifts

There still is no easing of the major restrictions the United States has imposed on Israel regarding construction in Jewish neighborhoods and areas that are over the Green Line, whether in Jerusalem itself or in Greater Jerusalem.

Whatever is happening behind the scenes on that issue is not talked about. Building in Givat Hamatos in southern Jerusalem, which was approved a considerable time ago by the planning institutions in Jerusalem, is still frozen.

From an Israeli standpoint, this is a painful obstruction of a crucial urban-strategic link between the Gilo neighborhood and the Har Homa neighborhood. Construction is also frozen in the E1 area, where a neighborhood linking Maale Adumim and Jerusalem is supposed to be built.

Construction in the Greater Jerusalem area is approved sparingly under American supervision. Even within Jerusalem’s municipal boundaries, little construction is approved in neighborhoods that were added to the city after 1967.

Diplomatic observers in Jerusalem believe that reports in recent weeks about “progress” in talks on an Israeli-Palestinian “deal of the century” are not unrelated to the president’s declaration. According to this analysis, it is not inconceivable that Trump will now request a “payment” for this historic step in the form of Israeli concessions connected to the ongoing talks.

The Temple Mount – Not Part of the Game

The status quo on the Temple Mount will be maintained. Jews will not be permitted to pray there, only visit. The Israeli-Jordanian de facto joint management of the site will continue. The senior status on the Temple Mount that Israel granted Jordan in the two countries’ peace treaty will not change. Trump now understands the huge sensitivity and volatility of one of the most sensitive spots in the Middle East.

Trump’s speech does not promise, as noted, that Jerusalem will remain within its current boundaries when peace is achieved.

The American president recognized Jerusalem as Israel’s capital but did not commit that its current borders are its final borders. He thereby left the Palestinians a narrow opening, but certainly not a wide-enough one to return to the grandiose and fanciful plans for the city’s division that arose in the past. It is possible, for example, that the New York Times report on a “Saudi proposal” to Mahmoud Abbas that revives the old notion of a Palestinian capital in Abu Dis (a neighborhood bordering Jerusalem on the east) hints at additional new thinking in the context of U.S. policy on the Jerusalem issue.

The Embassy Is Not Moving So Fast

Trump, like his predecessors, will not be moving the U.S. embassy to Jerusalem “tomorrow.” He is deterred by the Palestinian threats on this issue. The administration is talking about a “transfer process of three or four years.” The site to be chosen for the embassy will, apparently, be in West Jerusalem and not in the east of the city. The president is now talking about launching the logistical preparations for the embassy’s transfer.

Trump thereby joins a series of U.S. presidential candidates who promised but, upon becoming president, did not deliver. Perhaps this will change in the future.

Where Will the Recognition Lead?

The question of where Trump’s statements and the American recognition of Jerusalem as Israel’s capital will lead depends on the behavior of the sides.

At least on the rhetorical level, Trump’s declaration united the Muslim world (“moderates” and “extremists”) against Israel: Iran, Turkey, and Qatar, along with Egypt, Saudi Arabia, and Jordan, all denounced Trump’s move and warned of the repercussions.

At the same time, reality will ultimately be determined on the ground. The “three days of rage” that Fatah declared, and Hamas’ threat to renew the intifada, will test not only Israel’s ability to put out the fire if it erupts, but also the Palestinians’ ability to bring masses of people into the streets.

When the issue of Al-Aqsa and the Temple Mount was on the agenda in the summer (in the “metal detector” crisis after the terror attack on the Mount), masses of Palestinians did take to the streets, and eventually, Israel gave in and removed the detectors.

However, on other occasions during the past year when Hamas and Fatah called for a “day of rage” and protests, the street did not respond. If Hamas again succeeds to channel the protest in the Al-Aqsa direction and to convince the public that the American recognition of Jerusalem as Israel’s capital once again means that “Al-Aqsa is in danger,” the masses will again take to the streets. But as long as Al-Aqsa is outside of the picture, the waves of protest will be lower.

One of the dangers of another religiously driven imbroglio lies in the cooperation between Jordan and Erdogan’s Turkey. In recent years Turkey has been trying to gain a foothold in Jerusalem by funneling funds to various institutions and endeavors in the Old City and on the Temple Mount, and it has indeed accrued influence among the east Jerusalem population.

Turkish visitors to the Temple Mount

Erdogan has already started trying to incite anger over the American recognition on a religious footing. Israel’s interest, then, is to try to isolate the Temple Mount from the current agitation and to prevent actors such as Hamas, the Northern Branch of the Islamic Movement, Turkey, or Qatar from again setting the field ablaze.