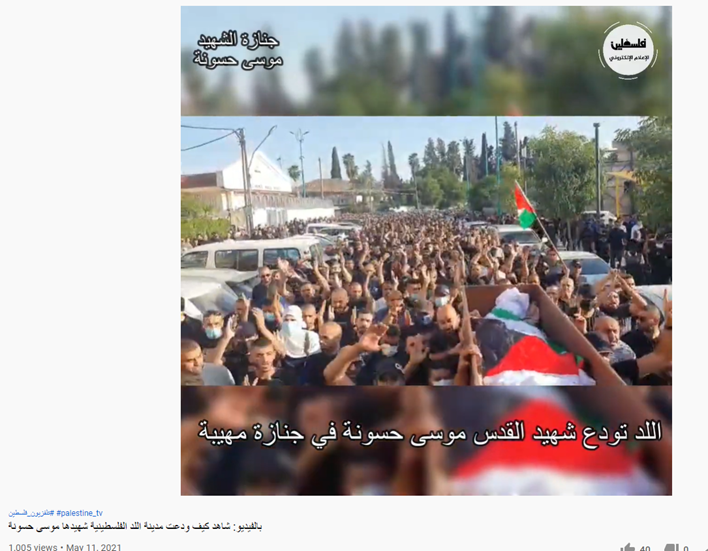 With the silencing of rocket fire on the Gaza-Israel front, Israel, the US and other governments hope Mahmoud Abbas, chairman of the Palestine Liberation Organization (PLO) and the head of Palestinian Authority (PA), can assert a moderate alternative to HAMAS, the terror organization that controls Gaza.

Abbas has often  been seen as someone who accepts Israel’s existence, at least within the 1949 Armistice lines (also known as the pre-1967 lines), while HAMAS flaunts its desire to kill or  drive out all  Jews inside  Israel.

But Dr. Abbas— known also by his nickname “Abu-Mazen”—has ramped up verbal attacks against Israel, using state-run radio and TV media to delegitimize Israel and to encourage physical violence inside Israel. 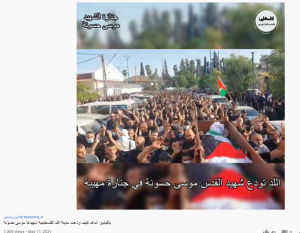 “The Israeli-Occupation State is committing state terror in Gaza, deliberately destroying houses on their occupants and all infrastructure,” declared Abbas in a broadcast on Voice of Palestine Radio last week.

Abbas never condemned or even criticized the indiscriminate rocket and mortar fire on Israeli civilians by HAMAS (whose name Harakat al-Muqawama al-Islamiyya means the Islamic Resistance Movement), but he was caustically critical of civilian loss of life allegedly caused by Israel which has been trying to pinpoint HAMAS rocketeers hiding behind human shields. 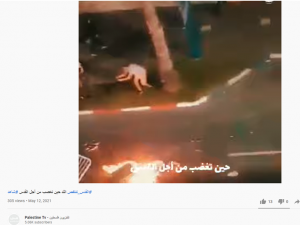 “Killing children and old people is state terror and a war crime,” continued Abba, explaining “These are war crimes punished by international law, and we will not take lightly the pursuing and bringing criminals to  the international tribunals.”

In the last week,  Abbas has surpassed even the most extreme statements of his predecessor Yasser Arafat. Both men  agreed to the so-called Declaration of Principles (or Oslo Accords) in 1993 normalizing ties between Israel and the Palestinian Arabs, but now Abbas has exceeded Arafat in his efforts to delegitimize Israel entirely, regularly referring to Israel as “The Occupation.”

Abbas and his media asserted that “The Occupation” was “attacking our people in Jerusalem” as well as “inside The Occupation”—a reference to towns with Arab populations inside Israel like Lod, Ramle, Acre (Akko) Haifa and Tel Aviv-Jaffa—where Arab mobs killed several Jews and burned synagogues 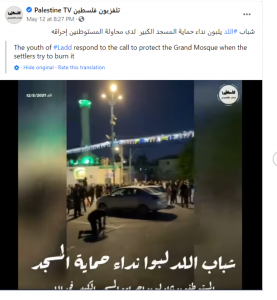 “We call for urgent diplomatic activity to end The Israeli Occupation on all Palestinian lands among them East Jerusalem,” insisted Abbas.

The Palestinian state media—VOP radio and PBC TV—repeatedly ran calls for two weeks calling for Arabs to “come out for the defense of Lod.”   [[See links, clips  and photos below]]

One of those of those who attacked defenseless Jews and synagogues was killed, and PBC TV filmed his funeral and declared him a  “a martyr of Jerusalem” and “brave martyr”—mustashhid  in Arabic.

“Lod says farewell to Jerusalem martyr Musa Hasouna in sad funeral,” was the caption on PBC

PBC literally fanned  the flames by showing live coverage of flames and riots in Lod, which PBC claimed were demonstrators  who “furiously stood their ground  for the sake of  Jerusalem.”

Abbas and his state media referred to Lod—an Israeli city next to Tel Aviv and Israel’s international airport—as occupied territory.  The top of the on-screen caption below is “Lod—The Occupied Interior.”  The rest of the caption cites the local Imam’s call to “defend the mosque” from attack by “settlers.”

This is a sinister and cynical echo of echo of past calls by Arafat and the late Mufti of Jerusalem Haj Amin al-Husayni who used “the defense of Jerusalem” as a battle cry for deadly pogroms against Jews in which thousand died:

–and Arafat once again in 2001 “Jerusalem Intifada;

The common ground between Abbas and the earlier efforts of Arafat and the Mufti Husayni is that they all used a totally false narrative of Jews attempting to destroy and Islamic holy place in order to incite and inflame an already tense situation, using the ensuing bloodshed for personal benefit.

Below is a picture from PBC TV and the captions and sound are very clear and completely false—that Jewish “settlers’ are trying to burn the mosque in Lod (mistakenly transliterated as “Ladd” in the PBC picture).

The caption on the screen in Arabic says “The youth of Lod respond to calls to protect the mosque.”

An additional caption in Arabic and English says “The youth of Lod (sic:Ladd)  respond to the call to protect the Grand Mosque  from an  attempt by settlers to burn it.”

It should be noted that the overall pattern of PLO Chairman Abbas in the last month is basically to bury what is known as “The Oslo Accords”—The Declaration of Principles of 1993 and subsequent Israeli-PLO agreements.

At the close of his remarks last week on PBC TV  and VOP radio , Abbas returned to the pre-1993 Oslo Accords  theme that “the refugee matter” ( Arabic: qadiyyat al-lajiyeen) must be solved via  UN General Assembly Resolution 194  which was passed in 1948 and which stated “that the refugees wishing to return to their homes and live at peace with their neighbours should be permitted to do so at the earliest practicable date.”

Many Palestinian Arabs and their supporters regard this 70-year old clause as re-setting the clock back to 1948, the year of Israel’s establishment. For them it is  a code-word for removing Israeli towns and cities and replacing them with Palestinian Arabs claiming refugee status for more than 70 years.  The same resolution also calls for UN control of holy places inside Jerusalem.

It is clear that Mahmoud Abbas, who cancelled the PA elections once again several weeks ago, is looking to out-do HAMAS  as an implacable opponent of Israel.

This raises the question whether he or his PLO can be seen as a moderate alternative to HAMAS.