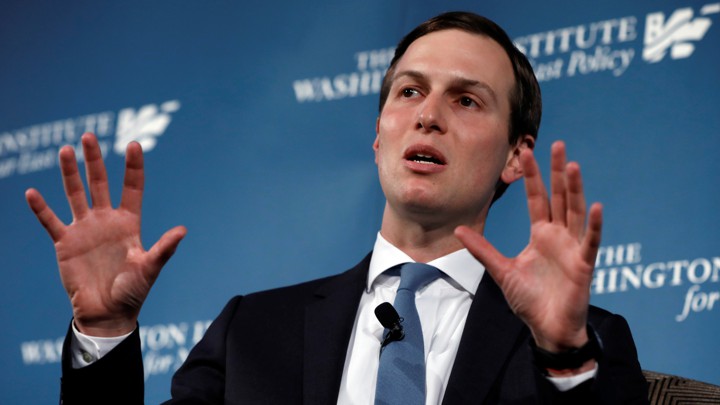 The Trump administration hasn’t actually released its Middle East peace plan. It’s so closely held that the Palestinians who are to be its object have not been invited into discussions of the subject. But the whispers of those who have been consulted suggest the possibility that the sequencing will commence with economic incentives for Palestinian acceptance of eventual subjugation into the state of Israel—a “one-state solution,” in diplomatic parlance.

If that is the White House senior adviser Jared Kushner’s approach, it would represent a reversal of the administration’s policy, which has until now been focused on imposing economic hardship on Palestinians in order to compel their acceptance of what Kushner terms “facts.”

The secrecy in which the Kushner plan is shrouded has not prevented the president from publicizing the plan as the “deal of the century.” The first stage is to be a “Peace for Prosperity” meeting in Bahrain, at which the administration expects Gulf states to provide $68 billion in investment to the Palestinians, Egypt, Jordan, and Lebanon to ease acceptance for subsequent political “facts”—the imposition of unwelcome political outcomes such as moving the U.S. embassy to Jerusalem.

Speaking to The New York Times, Middle East experts were derisory about the plan’s prospects. Tamara Cofman Wittes believes offering to buy Palestinian acceptance of an unstated political outcome “may sour the environment for any political plan.” Aaron David Miller argued that this isn’t a novel approach, the paper wrote: “If the United States could have bought peace in the Middle East through economic development, he said, it would have done so.” Robert Satloff concluded that “the only way to protect the long-term viability of the best aspects of the Kushner plan is to kill the plan.”

Nor does the foremost expert on prospects for Middle East peace, Jordan’s King Abdullah, consider it viable. His view is that “the only acceptable peace will be a comprehensive and lasting peace based on a two-state solution, leading to an independent Palestinian state on 4 June 1967 lines with East Jerusalem as its capital.” That is evidently not the rabbit Kushner intends to pull out of his hat.

Kushner seems to think the parties most directly involved in the Israeli-Palestinian dispute these 70 years fail to understand what they’re talking about. “If you say ‘two states,’ it means one thing to the Israelis, it means one thing to Palestinians, and we said, ‘Let’s just not say it,’” Kushner recently revealed. Kushner’s magic trick apparently relies on a sleight of hand that will use prosperity as a shiny object to distract Palestinians while their political aspirations are swept away.

The Trump administration’s Middle East peace plan sounds more like Chinese foreign policy than it does American foreign policy. American policy invokes the principle our Founders enshrined in our culture: that people have inherent rights and loan them in limited ways to governments for agreed purposes. We fail often to uphold this principle, but it is a genuine departure for an American administration not to even acknowledge it.

Moreover, other nations are less wary of our power because of our values. By tapping into the universal aspiration for human dignity and political liberty, American policy has been cheaper and easier to advance, because it works with the grain of positive political change. Our successes are seen as the advancement of a cause, not just the advancement of our interests.

China’s policy, domestic and foreign, is based on the premise that the government will create conditions for prosperity, and in return people must forsake political liberty. They prioritize “an emphasis on economic rights over individual political rights in the development of global norms,” as Michael Swaine has argued, and want an international “community of common destiny for mankind” on Chinese terms.

China would erase the truths we hold to be self-evident—that all people are endowed by our Creator with inalienable rights—by betting that their citizens, the citizens of developing countries, and even the cosseted rich of the liberal West will accept incursions on their liberty in order to have greater prosperity or affordability.

China’s defense minister, General Wei Fenghe, outright said so at the International Institute for Strategic Studies’ Shangri-la Dialogue in Singapore last weekend, justifying the forcible internment of more than a million Uighur people by arguing that “the living standard of the local people has improved.”

Jared Kushner and the rest of the Trump administration appear deaf to Benjamin Franklin’s warning that “those who would give up essential liberty, to purchase a little temporary safety, deserve neither liberty nor safety.” But the Palestinians, Jordanians, and others with hard experience of difficult trade-offs can hear it, which is why the administration’s Middle East peace plan is both dead on arrival and bad American foreign policy.

As the Trump administration displays the basest instincts of mercantilist, illiberal politics, we Americans and others should still be able to hear the sound of policy that appeals to the human spirit, and raise our voices to strengthen the sound. We should work to ensure, as Ralph Waldo Emerson wrote in his journals, that “what you are stands over you the while, & thunders, so that I cannot hear what you say to the contrary.” Expecting people to forgo their aspiration for human dignity and political representation is a message contrary to American values, and ought to be contrary to American foreign policy.