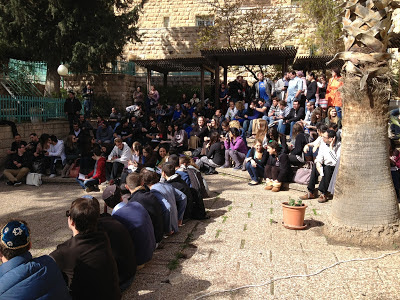 Since 2002, I have been intimately involved with newolim, or new immigrants to Israel, from all over the world. Being a rabbi, I am naturally interested in their Jewish identity and spirituality. There are huge discrepancies among the olim; from those who are not halachically Jewish to those who are religious from birth, and everything in between. What most olimhave in common, though is openness and desire to know more about Judaism. I am privileged to have been one of those helping to teach and advise thousands of new olim over the past 15 years.

The path of new immigrants can be difficult and lonely, and they need support. Part of what they need is community – a supportive group of friends and mentors. What could be more natural, in the Jewish homeland, than to extend such support and warmth to other Jews? One would think that the organization charged with encouraging and supporting aliya – the Jewish Agency for Israel — would encourage such assistance when it is offered. Especially when it is offered free of charge by a professional with experience. One would think…but one would be wrong.

The attitude that I have encountered at the “flagship” Jewish Agency absorption center – Beit Canada/Ulpan Etzion – in Jerusalem’s Armon Hanatziv neighborhood – calls into question the Jewish Agency’s policies and attitudes toward religious expression and education.

In 2008, the director of Ulpan Etzion absolutely refused to allow rabbis on campus, in contrary to the express desire of the students. I found it necessary to run a media campaign to overcome this refusal. In 2009, the new director of Ulpan Etzion allowed me on campus for one hour per week, in order to teach (I taught Chumashwith Rashi).  In practice, however, the same administration placed obstacles and restrictions on my ability to reach the ulpan students and engage them.

One staff member unnecessarily scheduled events at the same time as my class, interfering with my ability to attract students. Another administrator demanded that I stop using the ulpan students’ Facebook page to announce my class. That was astounding, since the FB page was created by a student, and had nothing to do with ulpan administration. This was followed by a demand that I stop organizing tiyulim for the students. The field trips were subsidized and insured, and thoroughly enjoyed by the students of Ulpan Etzion. Moreover, they took place during hours (on Friday and Shabbat) during which the students were free from the ulpan schedule. That did not stop the ulpan administration from insisting that I stop organizing these trips. I also made several attempts to work with the administration to bring all of the students for a trip to the Old City of Jerusalem. After all, the ulpan is located in Jerusalem, so what could be more natural than a trip to the Old City? I even offered to foot the bill for the tiyul, but to no avail; the administration refused to cooperate.

Ultimately, in early 2015, I was informed that I could no longer mix and mingle with the students in the absorption center in order to make their acquaintance and invite them to Shabbat and classes, etc. This was followed by a decision last year to ban all rabbis from the campus. The ostensible reason for the ban was that “someone was coming on campus without permission at all kinds of hours, without clearance.”  The absurdity of this claim is obvious. 1) The students are not “inmates;” they are allowed to bring guests on campus. 2) If the guests somehow entered the premises without permission from the guard at the gate, then that is a security problem that has nothing to do with either the students or the rabbis. 3) If there were someone entering the campus without clearance, what did that have to do with the rabbis? Why would that be a reason for banning the rabbis from entering the campus?

Clearly, there is a problem at the middle level, if not at the top echelons, of the Jewish Agency. The prevalent attitude causes Jewish Agency employees and officials to ban rabbis, contrary to the express wishes of the students. In order to make this clear, I gathered a petition of 300 students and collected nearly 50 testimonials from students over the past 14 or more years that I have been involved with Ulpan Etzion, and presented these to the administration at the highest levels. None of that seems to have made an impression on the Jewish Agency.

Instead of reaching out to rectify this situation, the administration of Beit Canada/Ulpan Etzion has exacerbated it. Recently, a group of students requested my presence to teach on the premises.  We are speaking of students aged 27-36, all of them college graduates, including one with a PhD. Yet, when I approached the gate, I was told that I could not enter. Instead, I was forced to gather the students and take them elsewhere for our class.

It is no secret that there is a strong correlation between the religious level of new immigrants to Israel and the probability of them remaining after aliyah. My own experience in helping them adjust to the realities of life in Israel is that the more spiritual and religious they become, the more likely they are to remain in Israel.  Not only do those who are already religious benefit, but also many who are not halachically Jewish become interested, and sometimes “join the fold” by converting. It is unfortunate that the organization entrusted with facilitating immigration to Israel —  the Jewish Agency —  not only fails to recognize this, but raises obstacles.  It is time for things to change.