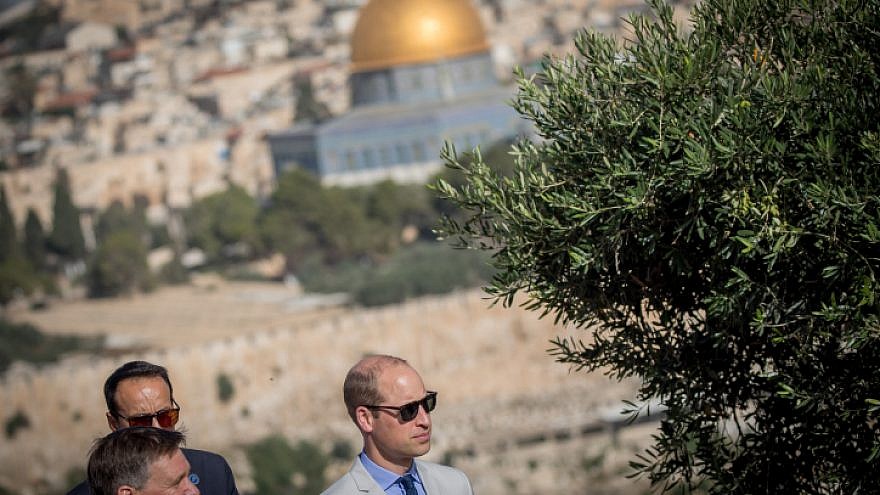 In 1066 William the Conqueror invaded England and “illegally” occupied the country…writes Michael Kuttner.

In 2018 the British Foreign Office which for the most part still seemingly cannot reconcile itself to re-established Jewish sovereignty in territory rooted in Jewish history, has sponsored a visit by William, Duke of Cambridge. The fact that during seventy years of independence no member of the British royal family has ever made an official visit to Israel is as a direct result of the United Kingdom’s craven surrender to Arab threats and blackmail.

For most Israelis the prospect of a blue-blooded royal gracing our shores is enough to generate enthusiastic excitement. We have had visits previously from various royals of other countries but somehow the prospect of welcoming a representative of the House of Windsor brings back nostalgic memories from Mandate days. Every day thousands of Israelis traverse King George V Street in Jerusalem without giving the origins of the name any serious thought. The last time that locals marvelled at a royal visit was when Kaiser Wilhelm visited Jerusalem and met Theodore Herzl. Although there is no Kaiser Wilhelm Street he did leave a lasting memento of his visit. Jaffa Gate, an entrance to the Old City had to be widened to accommodate his carriage.

Today’s heirs of the British colonial enterprise however cannot resist the urge to deny a lawful Jewish presence in our unrecognised Capital and this is why the visit of William, a young man who undoubtedly is aware of Biblical and Jewish history, is fraught with double standards and hypocrisy. When one understands that these royal tours are only undertaken with the sanction and guiding hand of the Foreign Office can one appreciate exactly the delicate dance of appeasement and double speak which accompanies such visitations.

Suspicions that this visit would be nothing more than an exercise in appeasing Arab sensitivities and “sticking it to Israel,” became evident when the itinerary was finally revealed. Jordan, the illegal occupier from 1948 to 1967 of half of Jerusalem, ethnic cleanser of Jews from the old city Judea & Samaria and desecrator of the Mount of Olives cemetery, would be graced with yet another official royal visit – one of many it has hosted over the years. Naturally the fake non-country of Palestine is part of this cavalcade of Foreign Office functionaries. In order that there should be no suspicion of recognition of Jewish sovereignty the Prince’s visit to the Temple Mount, the grave of his great-grandmother and the Kotel are described as being in “occupied Palestinian territory.”  This poke in the eye and denial of reality on the ground is a not very subtle demonstration of continuing British hypocrisy.

Further proof of the way this visit is being manipulated was provided by the fact that William will be “briefed” on the history of Jerusalem, not by any noted historian or expert but by a member of the British Consulate based in East Jerusalem. For those not aware of the significance of this please bear in mind that the British Consulate is the official diplomatic office to the Palestinian Authority and therefore encompasses territory claimed by them. It does not take much of an imagination to envisage what sort of historical revisionist history will be peddled to the Duke of Cambridge.

The media of course are willing partners in this whole farce. A small example should suffice to illustrate their manipulation of facts. Sky News reported that “a member of William’s team told Sky News that from the King David Hotel where the Duke is staying in Jerusalem you can see the separation walls and barbed wire.” Imagine you are an uninformed viewer and you hear this rubbish. Is it any wonder that false assertions parading as facts gain viral circulation?

This falsification is part and parcel of the narratives which pour forth from Ramallah on a daily basis. Thus when Abbas stands with William and declares with a straight face that his aim is to live in peace with Israel on the 1967 non-borders with Jerusalem as his Capital everyone is supposed to cheer and sing hallelujah. Paying salaries to terrorists and their families for murdering Israelis and denying Jewish connections to Israel gets a pass in this ongoing pantomime orchestrated by the Foreign Office.

Speeches are carefully crafted by British FO officials. They reflect the policies of the UK Government which continues to pretend that there is a country called Palestine and that Israel is illegally occupying territory originally allocated to Jewish settlement and never part of any Arab sovereign country. The Prince is merely the deliverer of this pre ordained script and we therefore have no way of knowing what his personal thoughts on the matter may be. We know that he was moved by his visit to Yad Vashem and his meeting with kindertransport survivors and his enthusiastic interaction with Israeli youth of all faiths was genuine. What we do not know however is how informed he may be about the British Mandate’s shameful policies of closing the doors of Palestine to Jews fleeing Nazi Europe, Holocaust survivors being barred from entering Palestine and instead being interred in Cyprus or even worse returned to Germany.

Is William aware that Jewish King David walked the streets of Jerusalem three thousand years ago and his son built the Temple on the Temple Mount now derisively described by the FO as illegally occupied? He certainly would never learn it from his minders working at the British Embassy in Tel Aviv or the Consulate in Jerusalem. Visiting the Israeli Prime Minister at his Jerusalem residence on Balfour Street would be an ideal opportunity for a quick history lesson on Lord Balfour’s pledge backed by the British Government of the day. However in the interests of not rocking the boat and maintaining a stiff upper lip I doubt that these basic facts were seriously spoken about.

During his visit to Ramallah William met the mayor of the city. Despite having spent considerable time in Jerusalem however FO officials refused to let the mayor of Israel’s Capital meet William. They derisively told the mayor that he could meet the Prince instead at the Ramat Gan residence of the UK Ambassador, a snub which was wisely turned down. This was but another in a series of pathetic acts of insulting appeasement which the British FO seems to excel in.

Arab perpetual refugees received assurances that “they were not forgotten.”  Apparently the 800,000 Jewish refugees who were ethnically cleansed from Arab countries have been forgotten, presumably because they are now productive citizens of Israel. The fact that they have never been compensated for the theft of their properties and livelihoods is of no interest to the international community.

As speculated the climax of the royal visit was a visit to the Kotel, Temple Mount and the grave of his great-grandmother, Princess Alice, who saved a Greek Jewish family during the Shoah.

The British, following in the footsteps of other double standard nations, frantically emphasised that these were “private” visits in case anyone should, heaven forbid, be under the misapprehension that somehow Israel was the sovereign power in the area. His pilgrimage to Judaism’s holiest site on the Temple Mount is a sober reminder that Jews today are still forbidden to pray there on pain of arrest.

There is no doubt that William is a sincere and personable young man who appreciates and probably understands the centrality of Israel to the Jewish People. It is therefore regrettable that he is prevented by protocol from escaping the political hypocrisy which envelopes current British foreign policy. The mind boggles when one envisages how things will be if Corbyn and his “friends” ever come to power.

This royal visit took 70 years to come to fruition. I wonder how long it will take before the next official one occurs.