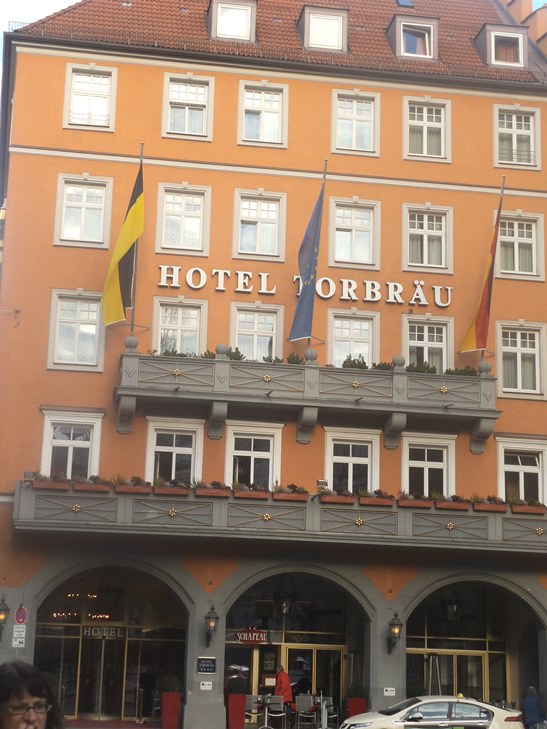 Munich-I made reservations at the Torbrau Hotel, which is the oldest hotel in Munich, one founded in 1492.The hotel advertises its tastefully appointed 90 rooms and old world charm, but this old world charm as I discover also includes being in the cradle of Nazism.

When I made the reservation, I knew the Torbrau Hotel was near the heart of what was Hitler’s stomping grounds in the 1920’s, but I hadn’t realized that it was actually in the basement of the Hotel that the infamous SS was founded by Hitler in 1925. There is, of course, no mention of any of this history in the pamphlets about the hotel laying out at the front desk or on its website. One has to carefully search on the internet to find this piece of information.

Upon arriving at the hotel, after checking into my room I immediately went to the basement, noting with some small satisfaction that my bag that says Tel-Aviv all over it was stored there. Today this basement is where guests of the hotel sit with laptops and access wifi, many of whom are no doubt unaware of the history.

When I made the reservation at the Torbrau I also hadn’t realized that the Nazi SA ( Strorm Troopers, or Brownshirts) were recruited in and drank here throughout the 1920’s. The SA was founded in 1921 by Hitler out of various roughneck elements that had attached themselves to the fledgling Nazi movement. It drew its early membership largely from the Freikorps (Free Corps), armed freebooter groups, made up largely of ex-soldiers that battled leftists in the streets in the early days of the Weimar Republic.

On arriving at the hotel I learned that it has been owned for the last 100 years by the Kirchlecher family-four generations worth. The Medieval Gate-The Isar Tor, next to the Hotel Torbrau, where there is a depiction of the crucifixion of Jesus Christ.
photo by Rhonda Spivak

When I ask one the young fair skinned friendly hotel clerks if the current basement is the original basement where the SS was founded, he tells me it is and that Werner Kirchlener could tell me more about it as “he was a little boy then and he remembers.” When he says this I begin to wonder what Werner’s parents were doing when Hitler founded the SS in their basement.

During World War II, “the Torbrau was bombed and only the front was left standing,” the clerk tells me.

The hotel’s website gives an overview of the hotel’s history but I am not surprised to see that this history jumps from 1903 to 1944, leaving out the 1920’s and the founding of the SS in the hotel basement altogether. http://www.torbraeu.de/en/13hhista.php

“I944: Hotel Torbrau could not escape the suffering caused by WWII. During the night of Dec 17, 1944, four bombs dropped from the allied bombers destroyed almost the entire property. Two people died during the attack and the landlord and landlady had to watch their life’s work burn to the ground in just a few hours.”

From the breakfast room of the Hotel Torbrau I can look out onto the old town hall building of Munich just down the street where Hitler’s Minister of Propaganda Joseph Goebbels ordered Kristallnacht, the night of broken glass where Jewish property, businesses and synagogues were destroyed throughout Germany and Austria on November 9, 1938. On the building of the old town hall there is a sign in German that notes this historical fact and a sign in English that is much smaller. If you don’t know to look for it, the sign is easy to miss.

Historians believe that Goebbels had personal reasons for wanting to bring about Kristallnacht. He had recently suffered humiliation for the ineffectiveness of his propaganda campaign during the Sudeten crisis, and was in some disgrace over an affair with the Czech actress Lída Baarová. For Goebbels, the Kristallnacht pogrom was a way of proving himself in the eyes of Hitler.

It is while I eat breakfast in the morning looking onto this town hall building that was bombed in the war by the allies and restored by the Germans that I contemplate the fact that there were only seven Jews from Munich who survived the Holocaust–one, two, three, four, five, six, seven. Given Munich’s centrality to the birth of Nazism and Kristallnacht, the number of Jewish survivors is hardly surprising. The old town hall building in Munich where Hitler’s Minister of Propaganda Joseph Goebbels ordered Kristallnacht, the night of broken glass where Jewish property, businesses and synagogues were destroyed throughout Germany and Austria on November 9, 1938. Part of the town hall was damaged due to bombing in world War 11 and rebuilt
photo by Rhonda Spivak

The Torbrau is right near the Isar Tor, one of Munich’s original main tower gates from medeival times. On the gate right away I notice the large depiction of Jesus on the Cross. As Dr. Catherine Chatterley, the founding director of the Canadian Institute for the Study of Antisemitism has taught me in her course on the History of Antisemitism, in order to understand why it was in Munich, Bavaria, where the roots of Hitler’s Nazism first took hold, one has to consider that Munich is a centre of Catholicism. For centuries the Catholic Church had preached that the Jews were responsible for killing Jesus. This diecide charge against the Jews led to well entrenched Christian antisemitism that was ingrained in the consciousness of Bavarian Catholics and formed part of the fabric of life. Hitler was able to use and capitalize on in this antisemitism in his rise to power.

From the Hotel Torbrau, I can hear the nearby church bells ringing and within minutes I am at the central plaza or square down the street, the ‘Marienplatz.’ The Marienplatz is named after virgin Mary, Jesus Christ’s mother, and in the very centre of the plaza there is a large gold statute of Mary holding the baby Jesus. The square was originally known as Schrannen but it was renamed Marienplatz as a way to ask Virgin Mary to protect the town from a cholera epidemic.

You can buy little replicas of the statute in souvenir stores. The centre of downtown Munich is filled with churches and crosses–they are simply everywhere, and I cannot begin to count how many. In fact, if you look at all the windows in the Torbrau Hotel (see first photo) you can see the windows have crosses in them–the architecture no doubt reflecting the values of the society.

From just outside the hotel for about five Euro I can take a subway line straight to the town of Dachau, where approximately 46,000 people live and from the Dachau station I can catch bus no. 726 to the notorius Dachau concentration camp. It will take about 30 minutes, that’s it. It’s not lost on me that there is a direct line from Hotel Torbrau to Dachau–literally and historically. For what begins in the basement of the Torbrau ultimately leads to the horrors of Dachau.

My room at the Torbrau is not particularly large and the bed is hard. But it is from the computer in the fourth floor business centre at the Torbrau, that I have written this first dispatch- as the editor of a Jewish publication trying to grapple with the difficult dark history that is literally outside my doorstep.