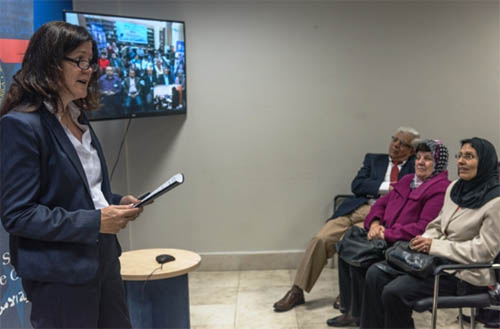 Deputy Principal Officer Dorothy Shea of the U.S. Consulate General visited the home of the Sub Laban family to examine the situation of the Palestinian family that is facing possible eviction for the home it had inhabited for 61 years.

In a press release, the consulate said it is concerned about the Sub Laban’s potential eviction from the Old City’s Muslim Quarter – which is now inhabited mostly by Jewish settlers.

Shea conveyed the consulate’s concern regarding the pending eviction of the Sub Laban family from their home over social media, saying “all people deserve fair treatment under the law?.”

She said, “The Sub Laban family has lived in their apartment since 1954 but now faces imminent eviction and is fighting for their right to appeal, despite their protected tenancy status.”

The deputy said the consulate is concerned by a pattern of evictions of Palestinian families in East Jerusalem,” she added.