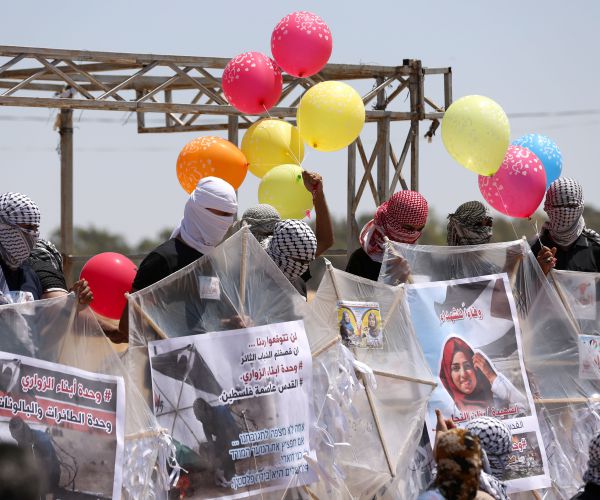 No matter how outrageous their actions, Palestinians can always count on the most of the world to give them a moral free pass. As the casualty numbers of Palestinian dead and injured climbed from Hamas’ “peaceful” riots at the Gaza-Israel border, the images of Palestinian suffering, agony and “martyrdom” dominated newspaper headlines and social media. Most of these headlines either implied or directly accused Israel of massacring and slaughtering innocent Arab neighbors.

Rarely, however, does any of the news coverage and commentary address any of these critical questions:

The one size fits all answer: As always, it’s Israel’s fault.

Like clockwork, Hamas is rewarded for its brutal policies by leaders who hate Israel, like Turkey, South Africa, and other nations that serially pass one-sided resolutions at the U.N. General Assembly and U.N. Human Rights Council to sanction Israel — but never the Palestinians. Only the threat of U.S. vetoes at the Security Council thwarts more dangerous, anti-Israel moves.

But there is a more basic question that must be addressed: Who is responsible for teaching generations of young Palestinians to hate?

Youngsters are imbued with a toxic narrative that demonizes their Jewish neighbors, omits any mention of a State of Israel in their textbooks, and teaches kids to venerate mass-murdering terrorists who have schools named in their honor. And what kind of administrators and teachers would cancel classes so that their students could put their lives in danger and participate in full-blown deadly riots?

It is becoming increasingly clear that a key U.N. Agency is a core part of the problem.

The United Nations agency that handles medical and education for fifth-generation Palestinian “refugees” has the audacity to demand an investigation into Israeli crimes in Gaza! Never mind the fact that UNRWA schools dismissed children from school on the bloodiest days of rioting so that children could participate in Hamas’ deadly assaults on the Israeli border.

UNRWA’s PR apparatus continues to claim they use a “peace curriculum.” Rubbish. In addition to their textbooks never mentioning the State of Israel, maps identify even Tel Aviv by a phony Arabic name, and poems glorify fallen terrorists, while teachers instruct students to hold up a symbolic key that gives them claim over Israeli land — every inch, from the Mediterranean to the Jordan.

UNRWA is the single largest employer in Gaza and its boss is Secretary General Guterres. He is ultimately responsible for the behavior of his employees. If anything is to change in Gaza, the status quo is unacceptable. Secretary General Guterres should terminate all teachers and administrators who have been teaching Palestinian children hate, not hope, and replace them with educators truly dedicated to the goals of peace — not Hamas’ fanatic genocidal goals.

“…they themselves offered up their own children, and those who had no children would buy little ones from poor people and cut their throats as if they were so many lambs or young birds; meanwhile the mother stood by without a tear or moan… the whole area before the statue was filled with a loud noise of flutes and drums that the cries of wailing should not reach the ears of the people.”

“…they put the child between his hands, and it was burnt, when it vehemently cried out; but the priests beat a drum, that the father might not hear the voice of his son, and his heart might not be moved.”

But Hamas’ modern Moloch is actually more brutal than the ancients. Far from masking the sounds and sights of civilians dying at the Gaza border, they revel in it. They record each shooting, death, and funeral to go viral on social media and live on Al Jazeera. Families’ cooperation with Hamas translates into $3,000 for every dead Palestinian.

The accompanying orchestrated cacophony dutifully depicts Israelis as Nazi-like murderers gunning down nonviolent protesters and the Jewish state pursuing ethnic cleansing against a heroic, outnumbered, neighbor. Yet, all the media manipulation and all the cynical crocodile tears cannot wash away the truth: It is Hamas, not Israel, with blood on its hands.

Unless the world stops rewarding Hamas inhuman abuse of its own people, expect more needless suffering on both sides of the Gaza border.

In 1977, Rabbi Marvin Hier founded the Simon Wiesenthal Center, named in honor of famed Nazi hunter, Simon Wiesenthal. Under his leadership, the Center and its Museum of Tolerance have become one of the foremost Jewish human rights agencies in the world, with a constituency of more than 400,000 families and offices throughout the United States, in Canada, Europe, Israel and Argentina.