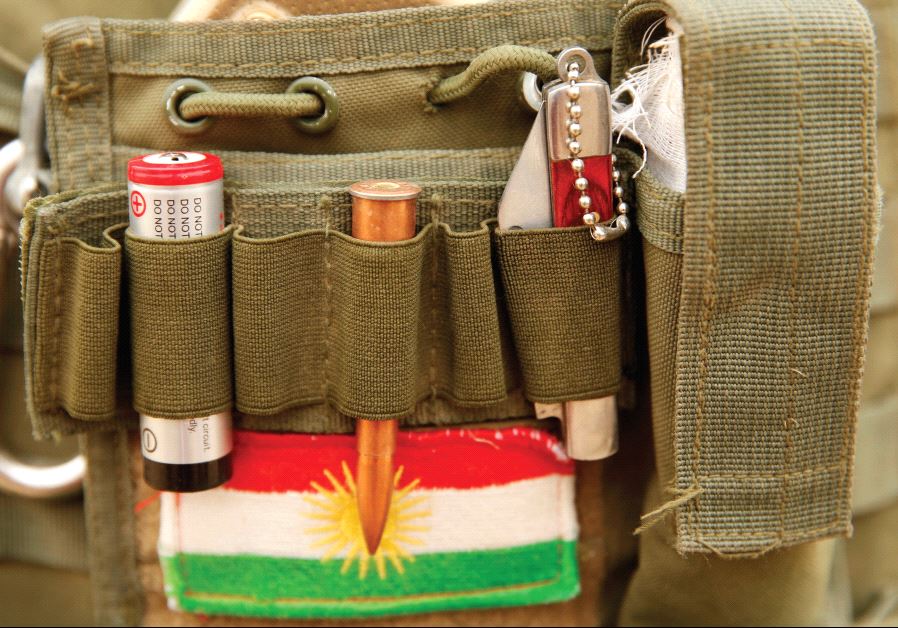 In the wake of Iranian aggression across the Middle East region, the most effective strategy that Israel can adopt to counter such a threat is to recognize an independent Kurdistan and to fully support it.

Across the Middle East region, Israel faces a variety of security threats from Hezbollah in Lebanon and Assad’s regime in Syria to Hamas in the Gaza Strip and ISIS in the Sinai Peninsula. These already existing threats are exasperated by Iran seeking to establish a Shia Crescent from the Persian Gulf to the Mediterranean Sea and the Red Sea. In the framework of seeking the establishment of a Shia Crescent, Iranian Revolutionary Guards Commander General Ghassem Soleimani recently declared support for Hamas working to wipe Israel off the map as the Islamic Republic built its third underground ballistic missile production factory. The question remains, how can Israel best counter Iranian aggression in the Middle East? The most effective strategy that Israel can adopt to counter these threats is to recognize an independent Kurdistan and to fully support it.

In order to prop up Assad’s regime in Syria and Hezbollah in Lebanon, Iran needs territorial consistency from Iran to Iraq, Syria and Lebanon. This way, they can import supplies with ease to their proxies on land routes for Israel has already demonstrated that they can infiltrate and stop Iranian shipments to their proxies more easily if they attempt to do it over the sea or in the air. However, an independent Kurdistan in Syria and Iraq would territorially break up the Shia Crescent, thus making it logistically more difficult to carry out its terrorist activities across the Middle East for the Kurdistan region of Iraq led by President Barzani’s government will not permit Iranian shipments to terror groups to pass through his territory. If Kurdistan becomes a full-fledged independent state in Northern Iraq and parts of Syria, the logistical obstacle for Iran supplying its proxies will greatly increase. As Syrian Kurdish dissident Sherkoh Abbas noted, “The road to Iran runs through Kurdistan and starts in Syria.”

Aside from Kurdistan serving as a territorial buffer against Iranian aggression in the Middle East, Abbas has argued that the establishment of an independent Kurdish state in parts of Syria and Iraq can be utilized as a safe zone for Syrian refugees seeking to flee from ISIS and other terror groups. This would greatly improve the humanitarian situation in the region for refugees will have a place to call home while the refugee crisis in Europe can be abated a bit. Abbas stressed that these Syrian refugees together with the freedom-loving Kurds can establish a country in the Middle East that promotes democracy, human rights, women’s rights, minority rights and which works to counter radical Islamism. Abbas argues firstly for the establishment of an independent Kurdistan in Northern Syria and Northern Iraq for this could be a model that promotes tolerance, democracy and coexistence among different faiths and ethnic groups. If this first option is not obtainable, then at a minimum he stressed that there should be a federal model for Syrian Kurdistan and independence for Iraqi Kurdistan. He argued that the Kurds can lead Syria into a new era, where the newly founded state is at peace with all its neighbors including Israel.

By having another Muslim country in the region maintain warm and friendly relations with the State of Israel, this can help to end the Jewish state’s regional isolation. In recent years, Israel’s regional isolation has already been waning. Numerous countries in the Arab Gulf no longer view Israel to be the main enemy. For them, Iran is the biggest threat and Israel is now a potential ally in this struggle against Iranian aggression. Not too long ago, Israeli Communications Minister Ayoob Kara recently met with representatives from Qatar, Oman and Yemen in Ecuador. This meeting was reported on openly in the press. This was unheard of not too long ago.

Furthermore, Israel has a Reconciliation Agreement with Turkey as well as peace treaties with both Egypt and Jordan. The Israeli government especially has a good working relationship with Sisi’s government and this affects Egyptian-Israeli relations. An example of the good relationship between the two countries is the Tel Aviv City Hall being lit up in the colors of the Egyptian flag to show solidarity with Coptic terror victims within Egypt in a recent terror attack. Not too long ago, no Israeli governmental building would be lit up in the color of any flag of any Arab country. Thus, supporting an independent Kurdistan can help contribute to this trend of ending Israel’s regional isolation.

However, one should recall that Israel should be skeptical about trusting the Arab countries and Turkey. Once the Iranian threat is removed, the Arab countries could refocus their efforts on being anti-Israel once again. And as Erdogan’s anti-Israel statements earlier this month where he referred to Israel as a racist country and called upon Muslims to march on Jerusalem in solidarity with the Palestinians highlighted, the Reconciliation Agreement rests on shaky grounds due largely to the leadership’s close association with the Muslim Brotherhood and aspirations to re-establish the Ottoman Empire. It is therefore better for Israel to work with oppressed moderate Muslims such as the Kurds in order to reduce the threat of the Shia Crescent. While working with the GCC countries and Turkey may work for Israel’s short term interests in countering the Iranian threat, it is better in the long term for Israel to invest in her natural allies like the Kurds, who will stand by her in her hour of need.

However, there may still be those in Israel who feel that Turkey is too important of a country to antagonize by supporting the Kurds. While Abbas noted that Turkey is likely to oppose the creation of an independent Kurdistan and some Israeli officials might use this fact as an excuse to be opposed to supporting Kurdish independence, Abbas emphasized: “NATO can reassure Turkey that the creation of an independent Kurdistan south of its border, joining with the federated section of northern Iraq, will remove inordinate fear that secession-agitation will persist in its eastern reaches.” He argued that his country can obtain its independence without utilizing Turkish territory. The Kurdistan National Assembly of Syria only seeks independence in Syria and Iraq but is willing to compromise with a federal model in regards to Syria. The Democratic Party of Iranian Kurdistan and the Komala Party of Iranian Kurdistan seeks for Iranian Kurdistan to become part of a Kurdish state after a successful secessionist revolt against the mullah’s regime. Only the PKK seeks to obtain Turkish territory. The other Kurdish groups don’t have such aspirations. For them, they will be content with the Turkish Kurds being equal citizens in the Turkish Republic, serving as a diaspora community very similar to the Jewish Diaspora.

Aside from all of these reasons mentioned above, Israel should support an independent Kurdistan for it is the morally right thing to do. The Kurds were promised a country in the Treaty of Sevres but this promise was reneged in the Treaty of Lausanne, leaving the Kurds as the largest nation on earth without a country, a reality that affects 40 million people. The Kurds have their own unique culture, history and language, which is distinctly different from their Turkish, Persian and Arab neighbors. Furthermore, in the past, the Kurds had strong leaders who befriended the Jewish people, such as Cyrus the Great and Saladdin. In addition, the Kurds ruled themselves in the past under the Ayyubid Dynasty and the Bohtan Emirate to name a few. In fact, they were only absorbed by the Ottoman Empire in 1908. For this reason, the Kurds have a strong sense of nationalism. The Kurds passionately believe that their culture, language and historic destiny can be best realized by granting them the same rights that other nations possess.

“Only Kurdish strength, a Kurdish military force and a Kurdish state can guarantee that the Kurdish people will be able to live a normal life, the kind of life a nation that has its own state can lead,” Israeli scholar Dr. Mordechai Kedar proclaimed. “This is first and foremost an ethical position. They are not immigrants, they are not invaders and they will not go anywhere else. The West and particularly Israel must take a moral stance – which also happens to be a realistic stance – and support, both in word and deed, the legitimate rights of the Kurds to full independence and to a state like all the other peoples of the world. That is the only way to free them from decades of suffering brought on by long-extinct colonial interests. All those nations so eager to recognize a Palestinian people, a fictitious people whose existence was unknown before the 1970’s, a people without its own language, culture, ethnicity or territory – let’s hear them for the Kurds. The Kurds are a real nation, much more deserving of recognition and rights than the virtual Palestinian people.”

Within the Arab world, it is critical to note that many people perceive the Kurds in the same manner that they view the State of Israel. For example, according to an article written by Ofra Bengia in the Middle East Quarterly, in 1966, then Iraqi Defense Minister Abd al-Aziz al-Uqayli blamed the Kurds of Iraq for seeking to establish “a second Israel” in the Middle East. He also claimed that “the West and the East are supporting the rebels to create [khalq] a new Israeli state in the north of the homeland as they had done in 1948 when they created Israel. It is as if history is repeating itself.” She added that an Arab commentator had warned earlier that if such a thing should happen, “the Arabs will face within two decades their second nakba [catastrophe] after Palestine.” According to Bengia, these conceptions speak volumes for both how the Kurds and the State of Israel are perceived in the Middle East. She argued that these obstacles that both nations face in the Arab world alongside the similarities between both peoples create a common affinity between the Jewish people and the Kurdish people: “Both are relatively small nations traumatized by persecution and war. Both are leading life and death struggles to preserve their unique identity and both have been delegitimized. Both are ethnically different from the neighboring Arabs, Persians and Turks. Interestingly, resent genetic research has shown that the genetic connection between Jews and Kurds is stronger than those between Jews and Arabs.” For the above reasons, Israelis should support the Kurds in realizing their national aspirations.