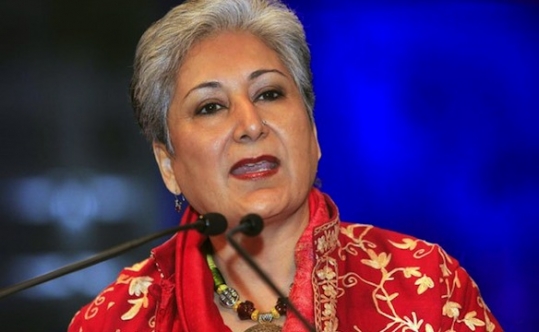 Despite the fact that many Muslims do not recognize Israel’s right to exist, this is not the original attitude reflected in the Qur’an, which actually recognizes the Land of Israel as belonging to the Jews, Raheel Raza told a captivated crowd at the Berney Theatre on Sept 25.

“We [Allah] have revealed the Qur’an with the truth, and with the truth it has come down. We have sent you [Muhammed] forth only to proclaim good news and to give warning.” [Qur’an, “Night Journey,” chapter 17: 100-104.]

After the lecture Raza referred specifically to the writings of Shaykh Prof. Palazzi, who relying on the above passage in the Qur’an, writes: “The Qur’an says that Allah gave the land of Israel to the Jews.” As Shaykh Palazzzi has written, “God wanted to give Avraham a double blessing, through Ishmael and through Isaac, and ordered that Ishmael’s descendants should live in the desert of Arabia and Isaac’s in Canaan. The Qur’an recognizes the land of Israel as the heritage of the Jews and it explains that, before the Last Judgment, Jews will return to dwell there. This prophecy has already been fulfilled.” (To read Shaykh Palazzi’s full comments click here.)

Raza, a reformist Muslim Canadian journalist, author and grassroots activist of Pakistani descent, who has been to Israel numerous times, told the crowd that there is nothing in the Qur’an that prohibits Muslims from recognizing Israel’s right to exist in the region and that the notion of using Islam as a weapon for preventing Arabs from recognizing any sovereign right of Jews over the land of Israel is not found in “authentic” and “classical Islamic sources.”

As she explained, Islamic fundamentalist movements made anti-Zionism the primary feature of their propaganda but this is not derived from authentic Islamic religious principles.

Mrs. Raza’s lecture was hosted by the Canadian Institute for the Study of Antisemitism, and introduced by its founding director, Dr. Catherine Chatterley. “Raheel Raza deserves the support of all Canadians for her principled stand in support of the rights of women, girls, gays and lesbians, and religious minorities within the Islamic world,” Dr. Chatterley told the Winnipeg Jewish Review. “Raheel is a very brave and principled activist who is critical of her own religious tradition and of its political manipulation at the hands of those committed to Jihadist violence and supremacy. Her critique of the oppressive, patriarchal nature of Islam, here and abroad, is necessary just as it has been in the history of Judaism and Christianity.”

Raza, who is a believing Muslim, explained that one of the five pillars of the Islamic faith is praying “five times a day.” She added that “when we pray we give blessings on the progeny of Abraham, who are Jews and Christians.” She said that “it [The Qur’an] affirms the history of the Jews as the original people of the book,” and indicated it was not legitimate to use the Qur’an as a basis “to discriminate against Jews.”

Raza, who is the author of “Their Jihad—Not My Jihad: A Muslim Canadian Woman Speaks Out (2005),” referred to verses in the Qur’an “where Jews are admonished for their opposition to the prophet Mohammed,” but she indicated that these verses belong to their own historical context and “cannot be used against Jews today.” She also said that these verses should not override Islam’s “universal message” which gives no basis to discriminate against Christians or Jews.

“The peoples of the book have to be respected,” Raza said, who noted that the first pillar of Islam is “belief in one God,” and that “Islamist ideology can be challenged by Islamic theology.”

According to Raza, who is President of The Council for Muslims Facing Tomorrow, one of the main problems with understanding what the Qur’an actually says is that there is a lot of illiteracy in the Muslim world, such that many Muslims have not actually read the Qur’an, and have been “brainwashed’ into thinking that it negates Israel’s right to exist. She quoted Salim Mansur, Associate Professor of Political Science at the University of Western Ontario in Canada, who says that “Islamism as a totalitarian ideology is a perversion of Islam.”

Growing up as a Sunni Muslim in Pakistan, Raza “fell in love with a Shia man,” which is one reason why they left Pakistan for Canada (via Dubai). She joked that her children are “sushis” because they are half Sunni and half Shia. She told the audience that she grew up in a “patriarchal” culture where women were supposed to “be seen and not heard” and that educating Muslim women is an important factor in bringing about needed change in Muslim society.

Raza spoke about Al-Quds day in Toronto, which she said is “a hate fest.” She also noted that “ironically” most of the people who come out for it are of Pakistani origin. She indicated that nobody ever asks why they aren’t demonstrating against the injustices and intolerance against minorities in Pakistan.

When Dr. Chatterley asked Raza about the prevalence of antisemitism in the Muslim community here in Canada she said that “in the Pakistani community there is rampant antisemitism,” which is directed against Israel and that most people fail to “separate Israel and Jews” in this regard. She said many people in Pakistan are illiterate “and they don’t even know where Palestine is on a map.” She added that in Pakistan there “used to be a thriving Christian community,” she was educated in English Catholic schools, but after the rise of Wahhabism, there has “been persecution of Christians.”

Raza said that more conservative elements in the Canadian Muslim community do not react well to a woman, such as herself, who knows the Qur’an and who promotes women’s rights, and who does not believe that Shariah law should creep into Canadian society. Raza, who is the first Muslim woman in Canada to lead mixed gender prayers, indicated that after 9/11 she was invited to be a speaker at a United Church event because the organizers wanted to hear from a Muslim woman. She said that since that time, “I find myself standing at church pulpits every Sunday.” She noted that her husband, who fully supports her work, is “known as a Muslim Zionist.”

Raza also said that those who want to support the position of moderate Muslims who expose radical Islam can sign up for the newsletter of The Clarion Project.

A video of the lecture and discussion is available on CISA’s website.

Editor’s Note: This report deals with only one part of Raza’s remarks in her very informative and educational lecture. In a separate article the Winnipeg Jewish Review will cover her opposition to Motion 103, a non-binding but contentious motion that calls on the Canadian government to “condemn Islamophobia and all forms of systemic racism and religious discrimination,” which Parliament has passed by a margin of 201-91. Raza opposes the contentious motion, which led to demonstrations and protests by both supporters and opponents around the country in early March 2017, and also calls on the government to take steps to “quell the increasing public climate of hate and fear.” She opposes the use of the motion which she says will stifle legitimate conversation that in any way criticizes Islamist ideology, and is “in sync with a constant push by the OIC (Organization of Islamic Cooperation) to turn any criticism of Islam or Muslims into blasphemy.”