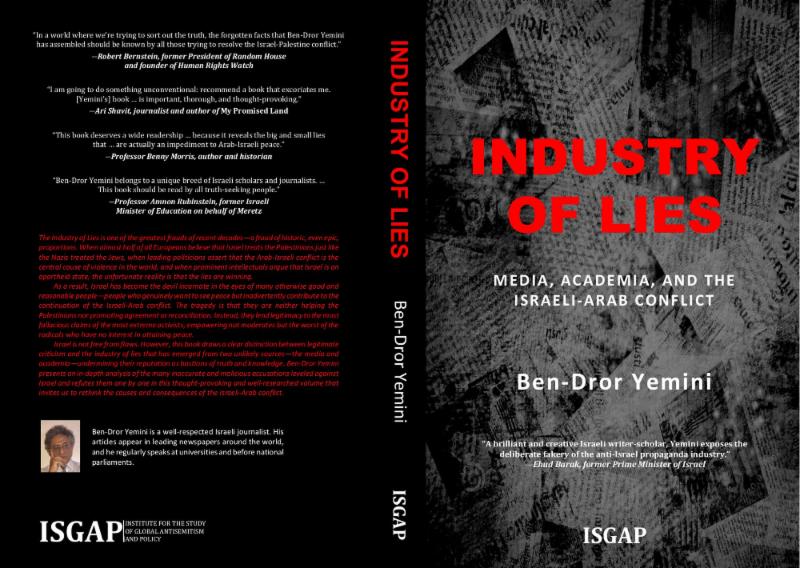 Facebook
Twitter
Google+
Pinterest
WhatsApp
ISGAP is honored to publish Israeli journalist Ben Dror Yemini’s important and timely new book, entitled The Industry of Lies: Media, Academia, and the Israeli-Arab Conflict. The book presents an in-depth analysis of the many inaccurate and malicious accusations leveled against the State of Israel and exposes the lies, fabrications and distortions behind anti-Israel and anti-Zionist discourse.
As the Middle East continues to unravel at alarming rates, The Industry of Lies highlights the importance of understanding that the tactics of double standards, demonization and delegitimization are all expressions of contemporary antisemitism.
Now Available For Purchase.
Industry of Lies:
Media, Academia, and the
Israeli-Arab Conflict
Ben-Dror Yemini CLICK HERE TO VIEW ON AMAZON
The Industry of Lies is one of the greatest frauds of recent decades – a fraud of historic, even epic, proportions. When almost half of all Europeans believe that Israel treats the Palestinians just like the Nazis treated the Jews, when leading politicians assert that the Arab-Israeli conflict is the central cause of violence in the world, and when prominent intellectuals argue that Israel is an apartheid state, the unfortunate reality is that the lies are winning.
As a result, Israel has become the devil incarnate in the eyes of many otherwise good and reasonable people – people who genuinely want to see peace but inadvertently contribute to the continuation of the Israeli-Arab conflict. The tragedy is that they are neither helping the Palestinians nor promoting agreement or reconciliation. Instead, they lend legitimacy to the most fallacious claims of the most extreme activists, empowering not moderates but the worst of the radicals who have no interest in attaining peace.
Israel is not free from flaws. However, this book draws a clear distinction between legitimate criticism and the industry of lies that has emerged from two unlikely sources – the media and academia – undermining their reputation as bastions of truth and knowledge. Ben-Dror Yemini presents an in-depth analysis of the many inaccurate and malicious accusations leveled against Israel and refutes them one by one in this thought-provoking and well-researched volume that invites us to rethink the causes and consequences of the Israeli-Arab conflict.