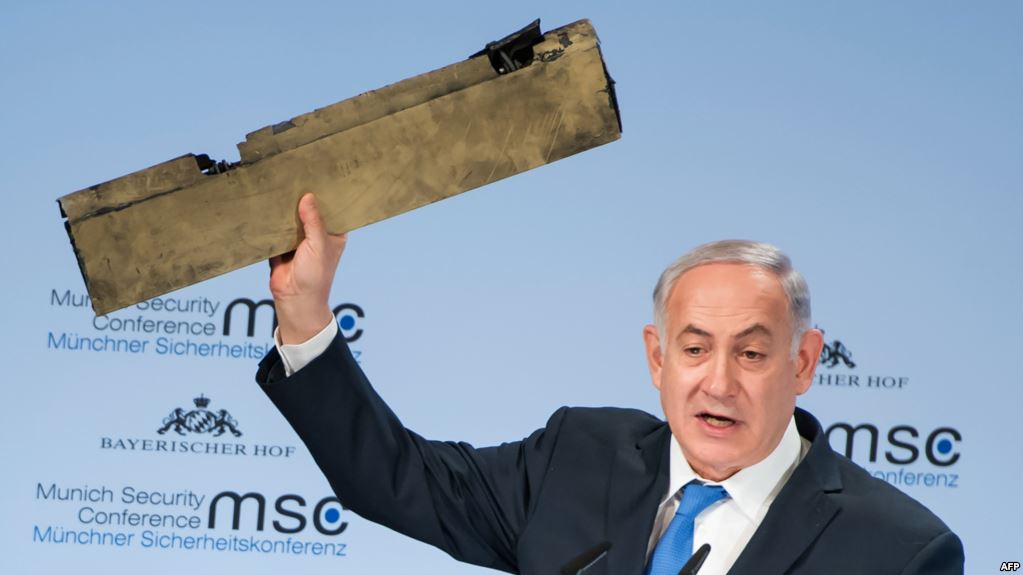 Prime Minister Benjamin Netanyahu addresses the Munich Security Conference and a showed a piece of the wreckage of the Iranian UAV that was shot down by Israel on 10 February. (Iranian Foreign Minister Zarif was present.) Following are his remarks:

“This is a beautiful city. It’s filled with impressive monuments, richly endowed museums, beautiful architecture. And due to this conference, over the past four decades, Mr. Chairman, Munich has become synonymous with security. That’s important, because, as I said last night, without security, nothing is really possible—not freedom, not prosperity, not the peace we cherish and crave.

But for the Jewish people, two infamous things occurred in this city. In 1972, 11 of our Olympic athletes were massacred at the Munich airport. In many ways, this act of savagery heralded the rise of international terrorism, and we’ve all been battling it ever since.

And 80 years ago, another event took place here, with far ranging consequences. A disastrous agreement was signed here that set the world on a course towards history’s most horrific war. Two decades after World War I, two decades after a war that claimed 60 million lives, the leaders who met in Munich chose to appease Hitler’s regime rather than confront it. Those leaders were noble men. They thought they were fulfilling their highest responsibility to keep the peace. But the price of their action would soon become apparent.

The concessions to Hitler only emboldened the Nazi regime and facilitated its conquest of Europe. Rather than choosing a path that might have prevented war, or at the very least limited its scope and its scale, those well-intentioned leaders made a wider war inevitable and far more costly. Sometime after the war Roosevelt asked Churchill, how would he call this war? And he answered immediately without hesitation, the Unnecessary War. He said there was never a war more easy to stop.

In the wake of the Munich agreement, 60 million people would die in World War II, including a third of my own people, six million Jews murdered in the Holocaust by the Nazis and their collaborators. We will never forget and we will never allow the rewriting of the historical truth.

Today we gather two-and-a-half years after another agreement was signed in another city in the heart of Europe. There too, noble men and women, high-minded leaders hoping to avoid war, signed an agreement that brutalizes its own people and terrorizes its neighbors. Let me be clear. Iran is not Nazi Germany. There are many differences between the two. Well, for one, one advocated a master race, the other advocates a master faith. Jews in Iran are not sent to the gas chambers, although religious and ethnic minorities are denied basic freedoms. And there are obviously many other differences. But there are also some striking similarities. Iran openly declares its intention to annihilate Israel with its six million Jews. It makes absolutely no bones about it. Iran seeks to dominate our region, the Middle East, and seeks to dominate the world through aggression and terror. It’s developing ballistic missiles to reach deep into Europe and to the United States as well.

Henry Kissinger said that Iran must choose between being a country or a cause. Well, the regime in Iran has chosen to be a cause. The commander of the Revolutionary Guard, Ali Jafari, said, we’re on the path to the rule of Islam worldwide. That means right here too. This is, in my judgement, the greatest threat to our world. Not just to Israel, not just to our Arab neighbors, not just to Muslims far and wide, but to you as well. Because once armed with nuclear weapons, Iran’s aggression will be unchecked and it will encompass the entire world. Look at what they are doing now, before they have nuclear weapons. Imagine what they will do later if G-d forbid they’ll have them.

Just as was true 80 years ago, an agreement that was seen as appeasement has only emboldened the regime and brought war closer. The nuclear agreement with Iran has begun the countdown to an Iranian nuclear arsenal in little more than a decade. And the sanction relief that the deal provided has not moderated Iran. It’s not made them more moderate internally and it’s not made them more moderate externally. In fact, it’s unleashed a dangerous Iranian tiger in our region and beyond.

Through its proxies, Shiite militias in Iraq, the Houthies in Yemen, Hezbollah in Lebanon, Hamas in Gaza, Iran is devouring huge swaths of the Middle East. Now, there has been one positive consequence of Iran’s growing aggression in the region. It’s brought Arabs and Israelis closer together as never before. In a paradoxical way, this may pave the way for a broader peace and ultimately also for a Palestinian-Israeli peace. This could happen. But it will not happen if Iran’s aggression continues to grow, and nowhere are Iran’s belligerent ambitions clearer than in Syria. There Iran hopes to complete a contiguous empire, linking Tehran to Tartus, the Caspian to the Mediterranean. For some time I’ve been warning about this development. I’ve made clear in word and deed that Israel has red lines it will enforce. Israel will continue to prevent Iran from establishing a permanent military presence in Syria. Israel will continue to act to prevent Iran from establishing another terror base from which to threaten Israel. But Iran continues to try to cross those red lines. Last week its brazenness reached new heights, literally new heights. It sent a drone into Israeli territory, violating Israel’s sovereignty, threatening our security. We destroyed that drone and the control center that operated it from Syria, and when our places were fired upon, Israel destroyed Syrian anti-aircraft batteries. Israel will not allow Iran’s regime to put a noose of terror around our neck. We will act without hesitation to defend ourselves. And we will act, if necessary, not just against Iran’s proxies that are attacking us, but against Iran itself.

Later today you will hear from Mr. Zarif. He’s the smooth-talking mouthpiece of Iran’s regime. I give Mr. Zarif credit. He lies with eloquence. Last year at this conference, Zarif said that, I’m quoting: “Extremism is driven by lack of hope and respect.”

Well, if that’s true, why does the Iranian regime deny its people hope and respect by jailing journalists and activists? Zarif said, it was erroneous to label Iran radical. If that’s true, what do you call a regime that hangs gays from cranes in town squares? Zarif said that conflicts in Syria and Yemen do not have a military solution. If that’s true, why does Iran send fighters and arms to fuel violence precisely in those places? No doubt, Mr. Zarif will brazenly deny Iran’s nefarious involvement in Syria.

Iran also denies that it committed an act of aggression against Israel last week, that it sent a drone into our airspace to threaten our people. Well, here’s a piece of that Iranian drone, or what’s left of it after we shot it down. I brought it here so you can see for yourself. Mr. Zarif, do you recognize this? You should. It’s yours. You can take back with you a message to the tyrants of Tehran: Do not test Israel’s resolve.

I’ve been speaking to the people of Iran with video messages. The response is amazing. I saw this before the recent demonstrations. I asked our intelligence people to explain to me how it is that we were getting names of people supporting what I said, from Iran, risking their lives, their families. I said something is happening there. Those people want freedom. They want a different life. They want economic prosperity. They want peace. They don’t want this far-flung Iranian aggression. And I’ve explained we have no quarrel with the people of Iran, only with the regime that torments them. And I take this opportunity to send our condolences of the families of the 66 Iranian civilians that lost their lives in the plane accident today. We have no quarrel with the people of Iran, but we are absolutely resolute in our determination to stop and roll back the aggression of Iran’s regime.

Let us pledge today, Ladies and Gentlemen, here in Munich, not to repeat the mistakes of the past. reconciliation never works. The hour to prevent war is getting late, but it is not too late. I am convinced that one day this regime will fall, and when it does, the great peace between the ancient Jewish people and the ancient Persian people will flourish once again. When that happens, the people of Iran will breathe free, and the people in the region will breathe a sigh of relief. But today we must speak clearly, we must act boldly. We can stop this dangerous regime. We can roll back its aggression and by doing so, create a more peaceful, a more prosperous and a more secure world for our region and for our future.”