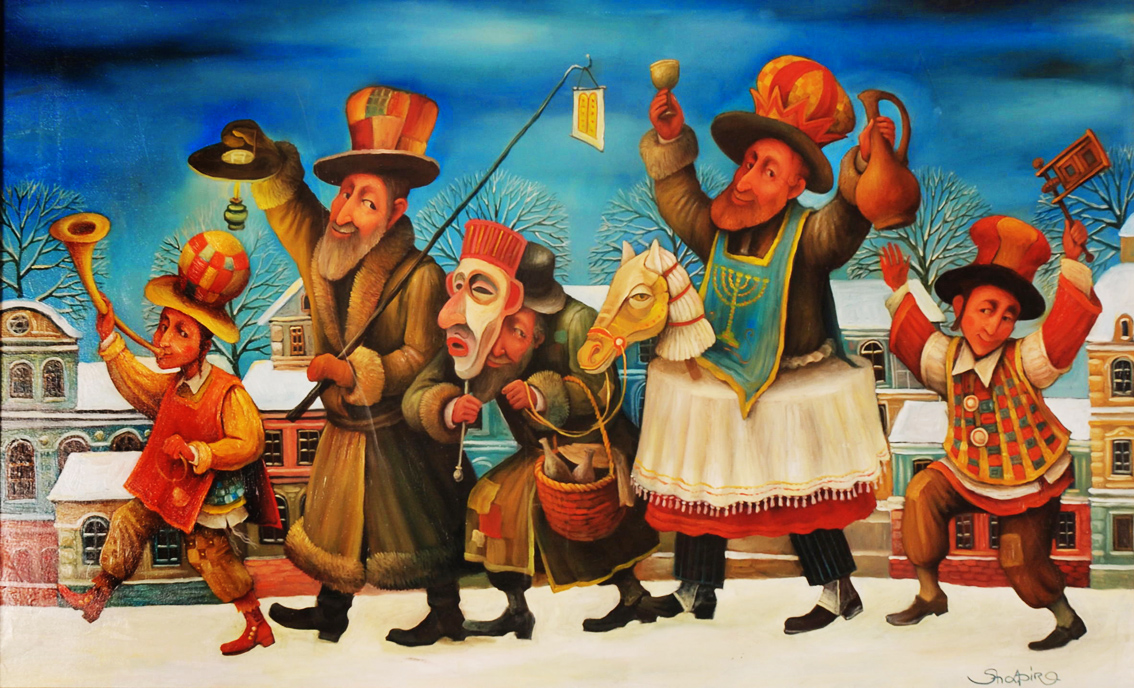 At this time of the year as Jews worldwide celebrate the deliverance of the ancient Persian Jewish Community from the threat of genocide, one of the customs is to stage a “shpiel” which translated from Yiddish literally means “play.”

Originally depicting historical events which took place, it has today morphed into depictions of current events and personalities using biting wit, satire, lampooning and humour. The key component of the Purim miracle as recounted in the Book of Esther which we read twice on this Festival is the Hebrew expression “venahafoch hu” meaning events turned upside down. From a situation of utter hopelessness and helplessness the Jews found themselves saved. Not only saved but their ordained fate completely transformed with their enemies and persecutors eliminated. With bold leadership the trembling Jews were saved from a fate which could have been catastrophic.

Current events provide more than enough ammunition for modern-day Purim “shpiels” as a brief survey will easily prove. All incidents and statements are actual and not a work of fiction.

The UN elects Syria and Venezuela to top posts on the Committee against subjugation of peoples. Ban Ki Moon sends his congratulations.

Iran announces its intention to pay thousands of dollars to terrorist families in a show of solidarity with these martyrs. Abbas demands that Iran funnel the funds via the Palestinian Authority Kleptocracy instead of direct to the families. Can anyone guess why?

The European Union Foreign Affairs chief calls on the PA to be more transparent, more accountable and more democratic. Following this statement the EU nevertheless approved another 274 million dollars in aid which no doubt will sink into the same black holes as previously.

The Palestinian Arab ambassador to North Korea issued the following statement on the occasion of celebrations marking the birth of Kim Jong Un (the father of the current glorious leader): “he devoted himself to the freedom of the country and its people’s happiness and the victory of the suppressed people’s struggle.”

The US State Department following stabbings and murderous rampages against Israelis by incited Palestinian Arabs: “we continue to encourage all parties to take affirmative steps to reduce tensions and restore calm.” Contrast this oft repeated mantra with the statements being made after terror attacks in Europe.

Obama: proud that he did not take action (red lines notwithstanding) after Syria used chemical weapons. No doubt those Syrians now homeless, destitute and suffering will feel eternally grateful.

During an interview with the Hamas newspaper “Falastin” the deputy head of the Islamic movement in Israel accused Israeli settlers of holding “Talmudic” ceremonies and weddings around the Al Aqsa Mosque and claimed that these are dangerous signs about the “imaginary” Temple. He warned that this “Judaization” policy will reach its height during Passover. Every day Israel implements its racist Talmudic plan within (sic) the Mosque, on the land bordering it (the Western Wall), the Old City and throughout Jerusalem.

Iranian researcher: Imports to Iran of genetically modified products are a Zionist plot to infect Iranians with diseases.

In the last few days the UN Commission on the status of women met and passed just one political resolution blaming Israel for Palestinian Arab domestic violence and mistreatment of women. Apparently the status of women elsewhere in the world is beyond reproach.

These few examples, no matter how delusionary or hate filled, should serve to alert the international community to the enormity of the problems we face today. However when it comes to Israel, logic, reality and above all moral honesty do not come into the equation. This was graphically illustrated by what I heard this past Monday and which I share with you.

This week I had the dubious pleasure of spending an entire morning listening to a session of the UN Human Rights Council in Geneva as it devoted itself to discussing the crimes being committed by the world’s one and only human rights’ abuser. No prizes for guessing which country I am talking about. Thanks to a direct feed from the session I was able to follow the litany of lies as the representative of one country after another took to the microphone and accused Israel of every sin imaginable.

Some background information should help to show exactly what sort of a Purim Shpiel this is. According to a previous decision of the UNHRC, every time they are in session it is mandatory to discuss Israel’s human rights violations against the Palestinian Arabs. Despite turmoil, chaos, jihad and mayhem in the rest of the world, the only subjects which must be discussed every time the Council meets are the threats to world peace posed by the Middle East’s only true democracy. On this particular occasion there were five resolutions on the table all condemning Israel. One of them was a demand that Israel hand back the “occupied” Golan Heights to Syria. If nothing else this demonstrates the imbecility of those taking part. That is putting it rather nicely. In actual fact it demonstrates blind hatred and total ignorance which usually go hand in hand. Also on the agenda was a report by the resigning Rapporteur who blasted Israel for refusing to allow him entry to investigate the heinous crimes with which it is being charged.

For three hours, delegate after delegate stood up and condemned Israel for committing every conceivable crime known to the human race. In every case they prefaced their remarks with bountiful praise for the resigning UN official and lamented Israel’s refusal to co-operate with this kangaroo court. I listened as paragons of democracy and human rights such as Zimbabwe, South Africa, Syria, Saudi Arabia, Lebanon, Iraq, Iran, Sudan, Venezuela, Cuba, China, Malaysia, Palestinian Authority and others you no doubt can think of, spewed the most baseless lies. Israel had decided to absent itself from this farce. Not one western democracy spoke but there was an exception which may or may not surprise you. In the midst of this nausea inducing performance the delegate of New Zealand stood up and tossed in his five cents worth. Reading from notes no doubt concocted in Wellington the NZ delegate not only praised the outgoing biased official but piously pontificated that if only Israel would cease settlement activity there would be no more violence and the glorious two State final solution would usher in an era of peace.

The most galling aspect is not just the nonsense he spouted but the fact that of all those countries which espouse liberal human rights values, New Zealand should have been the one and only such nation to align itself with the chorus of unmitigated slander spewing forth in Geneva. Instead of boycotting this lynch session New Zealand in effect gave it its stamp of approval. The NZ media seemingly ignored this shameful performance. I wonder how many MP’s are even aware it transpired and if they are whether they care.

This unbelievable farce however does not end here. On Thursday the UNHRC appointed a replacement investigator of Israel’s human rights crimes. The person chosen, a Canadian, is on record as comparing Israeli settlements (which include half of Jerusalem) to the transfer by Nazis of German-speaking people to its newly conquered lands. In addition he has stated that he hopes to isolate Israel. The UNHRC President proudly proclaimed: “the appointment of the new Rapporteur is based on his expertise, experience in the field of the mandate, independence, impartiality, personal integrity and objectivity.”

The Council concluded its deliberations of human rights by voting unanimously to establish a “black list” of companies operating in Judea, Samaria, East Jerusalem and the Golan.

I kid you not. This is the sort of lunatic logic with which New Zealand apparently is proud to be associated with.

The old Yiddish saying “nisht yeder tag ist Purim” – not every day is Purim no longer applies these days. Every day is indeed Purim when truth, honesty and moral integrity are replaced by baseless hatred of the Jewish State, incitement, hypocrisy and double standards, all sanctioned and given a stamp of approval by the international community.