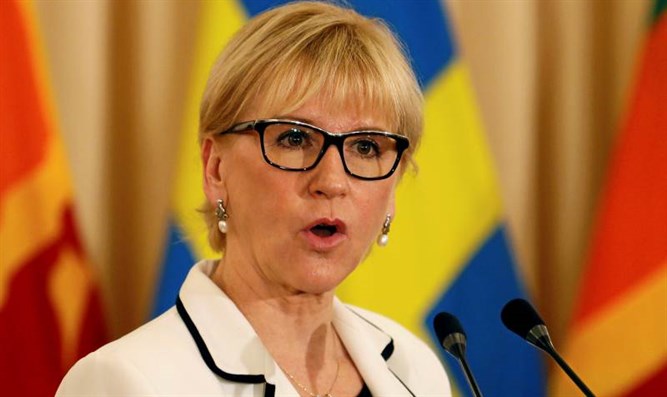 Sweden’s foreign minister told Palestinian Arabs that her country will “fight with you and for you,” prompting pro-Israel activists to accuse her of encouraging violence against Israelis.

Margot Wallstrom, whom Israel has accused of pursuing hostile policies against the Jewish state, made the pledge last month during a visit to an exhibition at the Palestinian Authority representative’s office in Stockholm.

“You know how much we care about Palestine, you know that we will continue to hopefully fight with you and for you,” Wallstrom said, adding: “And we will fight for a two-state solution, we will remain a close friend.”

The Sweden-Israel Friendship Association said in a statement last week that Wallstrom’s language, which is unusual for a top diplomat of a major member of the European Union, suggests that “the government of Sweden has placed itself on the ‘Palestinian’ side in their armed struggle to wipe out Israel.”

But a spokesperson for Wallstrom told JTA that her referencing of “fighting” was for “a negotiated two-state solution,” and that the “security of both Israel and Palestine is fundamental to Sweden.”

Sweden is the only country in the European Union that recognizes a state it calls Palestine.

“Palestinians walk around with keys in their pockets to homes that they once owned,” she said in reference to the Palestinian Arabs’ aspiration for what they call “return” to places inside Israel that some 700,000 Arabs left during the 1947-48 war that led to Israel’s creation.

“It is so important to know your history, to honor and to cherish your history,” Wallstrom said, but “also to think about the future.”

In 2015, Wallstrom said that terrorist attacks in Paris by radical Islamists were rooted in the Arab-Israeli conflict, drawing protests from Israel.