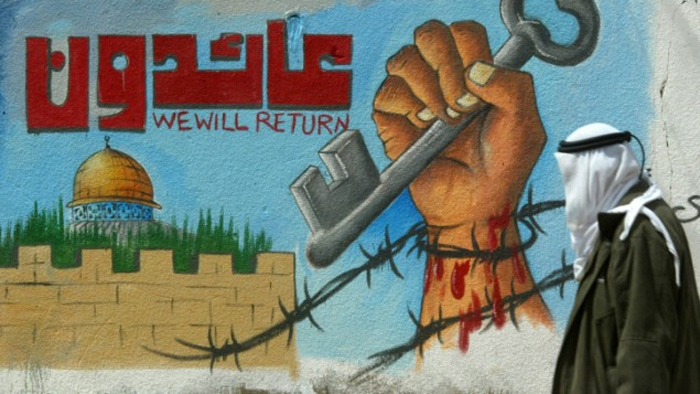 Israel’s ambassador to the UN Ron Prosor agreed, telling the gathering of former officials, diplomats and lobbyists that the policy was “the major hurdle to peace,” adding bluntly that “without talking about this problem, there won’t be peace.”

They were not speaking about settlements, the issue usually cited as an obstacle in a stagnant peace process. Rather, the speakers, most of them identified with pro-Israel groups, railed against the international community’s tacit acceptance of the United Nations Relief and Works Agency’s definition of a Palestinian refugee.

It is a technical matter, a bureaucratic definition, but one that has an outsize influence on Israeli-Palestinian peace, the event’s speakers insisted.

The UNRWA definition “reinforces the Palestinian leadership’s so-called ‘claim of return’ for millions of Palestinians,” said Prosor. “It doesn’t take a Harvard degree at the Harvard Club to realize that enacting this claim would cause Israel’s destruction…. It perpetuates a situation that takes us back to a one-state solution. Without talking about this problem, there won’t be peace.”

UNRWA was established in 1949 to provide social services and relief to some 700,000 Palestinian refugees displaced during the fighting that accompanied Israel’s establishment in 1948. Over time, as it worked with each new generation of Palestinians in Gaza, the West Bank and surrounding states, UNRWA developed an “operational definition” of a Palestinian refugee that is markedly different from that used for other refugee groups.

Unlike the rules of the UN High Commissioner for Refugees – all but the Palestinians are under the purview of the UNHCR – Palestinians’ refugee status cannot be revoked, not even when they obtain permanent residency or even citizenship in other countries. UNRWA refugees are also the only refugees who automatically inherit that status in perpetuity.

“There was never a thorough debate about what is a Palestinian refugee,” explained Steve Rosen, a former top AIPAC official now affiliated with the Middle East Forum, and an organizer of the event together with Australian real estate developer Bob Magid.

“The UNRWA practices that cause the most difficulty were invented by the bureaucracy of UNRWA itself,” Rosen said. “The UN mandate for UNRWA was ‘the reintegration of the refugees into the normal life of the Near East.’ This was after WWII when there were 100 million refugees worldwide, of whom the Palestinians were a tiny portion, less than 1%.”

But while the number of refugees worldwide dropped from over 100 million sixty years ago to under 30 million today, even as the world’s population nearly tripled, the figure for Palestinian refugees ballooned dramatically, from under 700,000 in 1949 to over 5 million today.

Of those 5 million UNRWA-registered refugees, fewer than 50,000, or 1%, are original refugees from that 1948 war and would be considered refugees under the UNHCR rules that govern other refugee populations.

Indeed, as many as 40% of recognized Palestinian refugees are citizens of Jordan, while most others are “firmly resettled” – have permanent, stable residence and livelihood – in various countries in the region and around the world.

Israel has argued that this special status of Palestinian refugees is a message that Israel’s existence as a Jewish state remains anathema to the Palestinians and signals an unpreparedness for peace.

As Prosor told the gathering, “many UNRWA camps are decorated with keys [symbolizing the homes from which many refugee families fled]. Young Palestinians are taught that these keys will one day open doors for them. But in reality these keys lock them in, in perceptions of the past and frustrations that they will never be able to realize.”

With a new government being formed in Israel that looks set to appoint a minister, Tzipi Livni, in charge of peace negotiations, and an American administration that says it continues to pursue a renewal of Israeli-Palestinian negotiations, the issue of refugees must take center stage for negotiations to be fruitful, the new campaign claims.

“As people who care for the cause of peace, we have to ask a very simply question: Are the policies we’re upholding making it harder or easier for future leaders to make peace?” Wilf, considered on the left wing of Israel’s political spectrum, asked the gathering.

She noted the discrepancy between the West’s acquiescence on the refugee question and its resistance toward Israeli settlements in the West Bank. Both, she insisted, stand in the way of a two-state solution.

“But if your policy on settlements was the same as your policy on [Palestinian refugees], it would look something like this: [You would] tell Israel, ‘Go ahead and build settlements, in perpetuity, and we’ll contribute a billion dollars a year to the cause. Never tell the settlers they will eventually have to leave. And when we come to negotiate a solution, you will do so in good faith and in a way that assures a proper Palestinian state.’

“I can assure you that all Western government officials I meet with think this is crazy,” Wilf said.

“But I tell them: ‘This is what you’re doing with the other major issue. You’re essentially telling the Palestinians, ‘Go ahead and create new refugees from a war long over. Keep expanding the number in perpetuity. We’ll be happy to contribute upward of a billion dollars toward this cause. Don’t ever tell them that they’re not going back to places they were never in, actually. Don’t ever tell them that. And we trust you that when the day comes to negotiate a peace agreement based on a two-state solution with Israel, you will do so in good faith and in a way that upholds the idea of a Jewish homeland.’ If you thought the earlier policy was insane, please explain to me why this policy isn’t insane. Your policy is a two-state solution and you’re literally doing your best to undermine it.”

In response to what they view as a key challenge to peace negotiations, some of the presenters, led by Steve Rosen, will be urging Congress to enact legislation the specifies that the US will only consider a Palestinian refugee someone “who was personally displaced as a result of the 1948 or 1967 Arab-Israeli conflicts, and who is not firmly resettled in another country.”

The language is similar to an amendment presented in the Senate last May by Illinois Republican Senator Mark Kirk. The amendment was approved by the Senate Appropriations Committee but did not become law when the larger bill to which it was attached failed to pass in the Senate.

Any new initiative that seeks to tackle the Palestinian definition of a refugee will likely face passionate opposition, Jonathan Schanzer of the Foundation for Defense of Democracies wrote at the time about the Kirk initiative.

“The refugee narrative is a sacred one in Palestinian political culture. Palestinian leaders will not simply table it because Congress passes new legislation. Rather, it’s a fair bet they will mobilize. When UNRWA merely mulled a name change in July 2011, Palestinians organized protests and sit-ins. Proposing real changes to UNRWA could even prompt violence,” he wrote.

Lara Friedman, director of policy and government relations for Americans for Peace Now, insisted that such an initiative “won’t work, even if this somehow makes it into law. Palestinians who consider themselves refugees don’t do so simply because UNRWA, or anyone else, gives them permission to do so,” she wrote in May. “They do so because this is their personal experience and their personal narrative. Forcing the UN to redefine millions of them to no longer officially qualify as refugees won’t change that self-definition, and it won’t make the issue easier to solve in the future.”

While critics have suggested Palestinians would view such an initiative as an end-run around their demands, some supporters of the initiative believe it is critical to reserve the term “refugee” for those who fall under the UNHCR guidelines and are in immediate need of protection.

“What we don’t want is for the idea of a refugee to be so far divorced from the ethos [of protection], from the reasons for refugee policy, that it will undermine international support for the concept of refugee,” said Grover Joseph Rees, the former general counsel to the US Immigration and Naturalization Service. “I think that’s really what we have here.”

He cautioned against cutting budgets to needy Palestinian populations. “Many [Palestinian refugees] still need help, and they should get help. We shouldn’t go willy-nilly cutting UNRWA’s budget.”

But, he added, “there is value in calling things by their right names. And we are going to confuse and ultimately undermine real refugee policy by making it something that is formal,” as in UNRWA’s case, rather than descriptive, relating to people who are refugees in the UNHCR sense of being in immediate need of protection.

And, its proponents continue to insist, the initiative will actually bring peace closer.

“Making it clear that the solution to the Palestinian refugee issue will not be the return to Israel is part of making peace. And a failure to make that point harms peace,” according to Steve Rosen. “Three American presidents have said that the future homeland of the Palestinian people will be in the West Bank and Gaza, not in Israel. And that the Palestinians will have a right of return, but into Palestine, not into Israel.”

Yet “the United States and many other governments have been reluctant to say to the Palestinians that the right of return [into Israel] is not a realistic demand,” Rosen lamented, “that it harms the prospects for peace, that you’re going to have to relinquish these claims, however painful that may be, if there’s going to be a political solution between Israelis and Palestinians.”

The United States, he said, has to “lead the way. We can’t expect the Palestinians to be more forthright in surrendering some of their dreams than we are. So addressing this problem helps peace.”