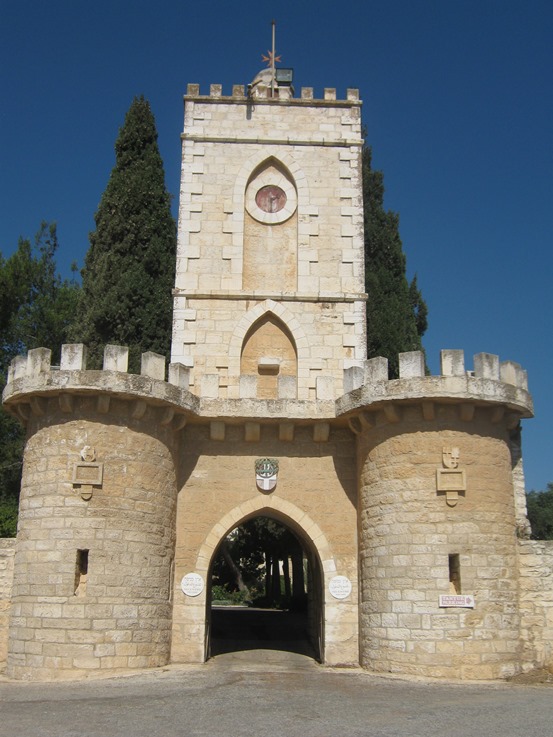 There’s a hill just outside of Bethlehem called “Tantur” (which is Arabic for Hilltop) that is located in a very strategic position that I think will be a bone of contention between Israel and the Palestinians in all future peace talks. It so happens to be where a Christian Ecumenical Centre owned by the Vatican is located.

I ended up at Tantur Ecumenical Centre as I was asked to meet Gershon Baskin, who was then Co-CEO of the Israel -Palestine Centre for Research and Information for an interview.But once I got to Tantur I began to realize how strategic the location was and I began to wonder about its history, and how it got to be built there.

Tantur, which stands literally at the entrance to Bethlehem is over the green line and prior to the 1967 Six day War it was in Jordanian hands.

After 1967, Israel built a ring of settlements around Jerusalem on land in the West Bank that was occupied by and annexed to Israel following the 1967 Six day War and 1980 Jerusalem Law. One of those ring settlements is Gilo, built to the South-west of Jerusaelm with some 40,000 residents and Gilo lies next to Tantur. Those “ring settlements” have always been part of the Israeli consensus as not being ones that Israel ever intended to give up in any peace negotiations with the Palestinians. When I got up to Tantur, I began thinking that if the Tantur land had been vacant, it too could have been part of Gilo, which is why I got interested in learning its history.

Once I got to the strategic hill of Tantur, with its beautiful ceder trees, olive groves, vines and its Ecumenical Centre, I could only assume it is a place that the Israelis would have built a “ring’ settlement on after 1967 if they had been able to. But they couldn’t.

That’s because the lands of Tantur were originally purchased in 1869 by the Austro-Hungarian Consul in the Holy Land with the aid of the Knights of Malta and some nobles of the aristocratic class in Germany. They opened a medical clinic and by 1877 there was a seven bed hospital. Friars who were under the protection of the Emperor of Austria administered the hospital and it was a way for the Habsburg Austro-Hungarian Empire to assert its presence in the Holy Land to compete with other Catholic and European forces who also had a foothold in the Holy Land. (This would explain the great fortress like entrance way to Tantur, seen in my photos). Remember too, that Tantur is at the very entrance to Bethlehem, the birthplace of Jesus Christ–and a very desirable place for the Austro-Hungarian Empire, the head of Christendom to set down roots). The hospital existed until the 1920’s, and then Salesian Fathers used the building for a seminary.

In 1964, Pope Paul VI visited the Holy land and was interested in finding a place for dialogue among theologians from different parts of the Christian community. As a result, in December 1967, the Vatican purchased the Tantur property from the Austrian Knights of Malta and leased it and handed the administration over to the University of Notre Dame (USA), which runs the Tantur Ecumenical Centre that is there today.

But note the date of purchase-December 1967, which is only six months before the Six Day War. When Tantur was purchased by the Vatican, the area was in Jordanian hands, as was the Jewish Quarter of the Old City, East Jerusalem, Bethlehem and all of the West Bank.

I can only wonder whether the Israelis after the Six Day War would have been so quick to let the Vatican purchase this strategic hill, or would have wanted to build on it as a “ring’ settlement had they been able.

The website of the Tantur Ecumenical Institute says that “Due to the difficulties of the Arab-Israeli conflict, the Institute itself did not open until 1972-” a full five years after it was purchased in 1967. That’s how sensitive and complicated the location is.

From Tantur, I had a commanding view of the next hill over, also over the green line, the Jewish settlement of “Har Homa.” In 2010, when my Arab East Jerusalem driver, who thought I was Christian took me to Bethlehem, he pointed to the Jewish settlement of “Har Homa’ and said “You see, that is the New Bethlehem.”I asked him what he meant by that, “The Jews think that hill [Har homa] will be theirs,” he answered. “But, one day, it will be back in our hands and it will be part of Bethlehem- the New Bethlehem.”

In fact, the left-wing Gershon Baskin, who was since involved in back channel negotiations with Hamas which led to the release fo Gilad Shalit, suggested to me in our interview at Tantur that he believed that the settlement of “Har Homa” with its homes could be offered to the Palestinians as part of land swaps, so that it could in effect become the New Bethlehem. (Presumably, Baskin thought this would be done as a forced evacuation by the Israel Defence Forces pursuant to a peace agreement, since none of the Jews living in “Har Homa” would ever agree to leave of their own accord).

Interestingly enough, “Har Homa” has some Jewish roots as in the 1940’s a Jewish group purchased 130 dunams (32 acres) of land on this hill between Jerusalem and Bethlehem known in Arabic as Jabal Abu Ghneim.During the 1948 Arab-Israeli War, the hill was a base for the Egyptian Muslim brotherhood, a position taken over by Jordan’s Arab Legion after the war. Following the war, the Jordanian Custodian of Enemy Property planted a pine forest there to prevent misuse of the land by local Jordanian residents. Since 1967, the forest has been maintained by the Jewish National Fund.

Plans for residential development were drawn up in the 1980’s, and initially approved by Prime Minister Shimon Peres. Construction began only in March 1997, when Benjamin Netanyahu was Prime Minister.

According to reports about the leaked Palestine papers, in 2008, Ahmed Qureia, the lead Palestinian negotiator, proposed that Israel annex all Jewish settlements in Jerusalem except Har Homa . In other words, the Palestinians apparently agreed that Israel could annex French Hill, Pisgat Ze’ev, Neve Ya’akov, Ramat Shlomo and Gilo near Bethlehem (These are the five “ring settlements”. But the Israeli negotiator Tzipi Livni is recorded as dismissing the offer because the Palestinians had refused to concede Har Homa, as well as the settlements at Ma’ale Adumim, near Jerusalem, and the settlement of Ariel, deeper into the West Bank.

It’s difficult for me to see the Israelis holding onto Gilo and Har Homa without keeping Tantur, although it’s possible that the Vatican may well wish that Tantur was in a Palestinian state. The Israelis have kept Tantur on the Israeli side of the separation fence and it’s located just before the checkpoint to get into Bethlehem, such that it is not under the Palestinian Authority.

When Baskin in our interview suggested that Israel give up Har Homa as part of a peace agreement, I meant to ask him whether he thought the Vatican also would be willing to give up Tantur land to the Palestinians for residential homes, in order to promote a peace agreement? Afterall, Tantur is closer to Bethlehem than Har Homa is, and it’s populated by far fewer people.

Something tells me, not likely.

[Part 2 to this Story will be Why the Vatican should want Tantur to be in Israel not Palestine, since Israel treats Chrsitians better than the Palestinains]