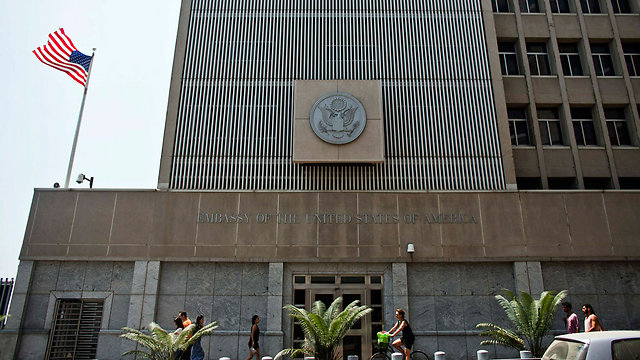 President Trump did Israel a favor that most people do not know about when he delayed the US embassy move to Jerusalem.

​There is much work to be done.

Current wording of the US Embassy Relocation Act deprives Israel over sovereignty in Jerusalem.

The  U.S. Embassy Relocation Act, as it now stands, does not  recognize Jerusalem as part of Israel.

That is why Trump did the right thing to delay the move until the the  US Embassy to Jerusalem Until US law is Changed.

The time is opportune to work with the US Embassy

​Relocation ​Act ​will be upgraded, so that the US will recognize Israel’s permanent legal  status in Jerusalem.

IF the wording of the Jerusalem Embassy Relocation Act is not corrected before the move of the US embassy, it will be  difficult to put the toothpaste back in the tube.

​As a journalist, I cover​ed events in the US capitol when Congress passed the “US Embassy Jerusalem and Recognition Act” in October 1995​.

​There were great expectations at the time that the US would abandon  US policy set in 1948  that Jerusalem would not be recognized as a part of Israel.

There was speculation at the time that the US would abandon its policy from 1948 that all of Jerusalem must be a “corpus separatum”– an international zone ​set apart from Israel.

However, ​the  final wording of the US Embassy Jerusalem and Recognition Act removed any references to Jerusalem as part of Israel and made no promises that Jerusalem would remain the exclusive capital of Israel.

The late Faisal Husseini, then head of the PLO Jerusalem committee, was present in Washington at the time, and he endorsed the wording of the

Law ​, since the US Embassy Relocation Act did not violate two cardinal rules of US policy since 1948 Jerusalem was not recognized as a part of Israel, and Jerusalem could still become an international zone.

The assassination of the UN envoy to Jerusalem in September 1948 suspended that process, but did not cancel that US policy.

The realities of the Jerusalem Embassy and Recognition Act were not lost on American citizens whose children were born in Jerusalem and whose children’s U.S. passports said “Jerusalem”, with no country listed, as their place of birth.

For that reason, Jerusalem American citizens initiated a class action lawsuit which reached the U.S. Supreme Court last year, with a demand to stamp Jerusalem on their passports.

Spokespeople of the US State Department make it clear that under

​the current law, even if the US embassy indeed moves to Jerusalem, US birth certificates will still be stamped “​Jerusalem”, with no country listed.

​Temple Mount​ , the US can simply repeat the mantra ​that ​ “ Jerusalem does not belong to you.”

Current wording of Jerusalem Embassy and Recognition Act in 1995, as passed into law, was watered down to only ​state the following:

​Why, then, the vocal Arab resentment and  the loud Jewish enthusiasm over the  the Jerusalem Embassy and Recognition Act?​​

It is doubtful whether either side has read the wording of the legislation.

The challenge is   whether the U.S. will recognize Jerusalem as part of Israel. Such a policy decision is more significant  than moving the U.S. embassy to Jerusalem.