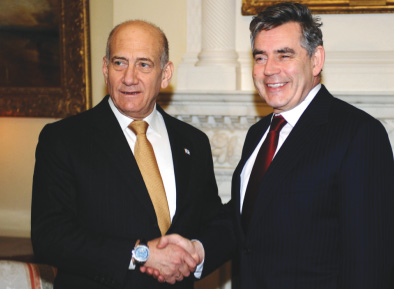 Until recently, Israeli government spokespersons, in bilateral dealings with the British government, had not publicly made reference to an Israeli intelligence report taking it to task for allegedly providing a safe haven for Hamas.

However, this week, during the visit of Israeli Prime Minister Ehud Olmert in London, Mr. Olmert’s spokesman, Mark Regev firmly stated, on the record, that the Israeli prime minister would press the issue with British Prime Minister Gordon Brown during his London visit.

In the report, the Israel Intelligence Heritage & Commemoration Center (IICC) in Herzelia, Israel, considered to he the “public face of Israeli intelligence,” accused the United Kingdom of being a “major source of publishing and distribution of Hamas incitement.”

“British authorities have yet to take effective action to put an end to the exploitation of their country by Hamas for spreading incitement,” the report said.

The report also said while Hamas’ media is “guided from Damascus and assisted by Arab countries,” its “branch operating in Britain is used for printing and distribution of Hamas publications.”

Prominent among these publications is the monthly Filastin al-Muslimah, Hamas’ major publication since the 1980s, which is available in paper edition and on the Internet.

Spreading incitement and hatred against Israel and the West in the spirit of Hamas’ ideology, it preaches the justice of terrorism and glorifies its perpetrators.

From Britain, it is distributed worldwide in both its online and hard copy editions. To avoid unwanted attention from British security services, Filastin al-Muslimah stopped publishing its address in the United Kingdom on the front page at some point during 2004. However, it is still published in the United Kingdom, openly and with impunity.

Directly associated with the monthly is a London-based publishing house called Filastin al-Muslimah Publications. In the past, the publishing house has printed books commemorating terrorists responsible for planning and initiating suicide attacks. Books on senior figures in the Hamas operative-terrorist wing – such as Salah Shehada, Yahya Ayyash, and Imad Aqel – are typical of the kind of works in which the publishing house specializes.

In this context, one of the major founders of the Filastin al-Muslimah publishing house is Ghassan Daw’ar, hailed by Hamas as “the historian of the intifada” (i.e., the campaign of terrorism against Israel) and “the historian of the shahids” (i.e., suicide bombers). In addition to writing books about Yahya Ayyash and Imad Aqel, two of the most prominent architects of Hamas’ suicide bombings, Mr. Daw’ar also writes articles for Hamas’ main Web site (palestine-info).

In 1999, he was arrested in Jordan with other Hamas leaders. According to the Hamas Web site, the cause of his arrest was his involvement in a committee that objected to the normalization of relations with the “Zionist enemy.” Though it now avoids publishing its address in Britain, the publishing house continues to advocate Hamas’ terrorist cause – apparently without interference from British authorities.

Not all these publications are aimed at adults. For the junior jihadist, there is the online biweekly Al-Fateh.

Combining articles and illustrations, it is geared toward children, whom Hamas considers a highly significant target audience. In particular, al-Fateh is designed to inculcate in children support for radical Islam, violence and terrorism. Al-Fateh is published in London, a fact openly stated on its homepage at www.al-fateh.net.

Al-Fateh’s editor-in-chief and founder is Sami al-Halabi, although according to the report, this is the pen name of Abdallah al-Tantawi, a senior figure in the Syrian Muslim Brotherhood in the mid-1990s (Hamas is the Palestinian branch of the Muslim Brotherhood).

The IICC report asserts that Hamas’ use of Britain as a major source of publishing and distribution of incitement is “hardly coincidental.” On the contrary, “there are several factors at play: first, the policy of the British government, allowing Hamas (and radical Islamic elements in general) a relative freedom of action on British territory, particularly in the sphere of propaganda; second, the existence of a network of Arab/Muslim supporters in Britain; third, the technical ability to produce high quality publications in Britain and distribute them across the globe.”

The fact that these publications have maintained a presence in the United Kingdom – even after the deadly Islamic attacks on London on July 7, 2005, raises serious security questions – not only for Israel, but for British subjects as well.