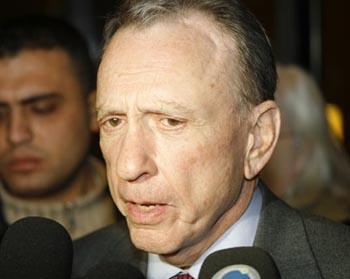 A pro forma announcement of the Israeli President’s office that U.S Sen. Arlen Specter (R-Pa.) was meeting with the Israeli president tipped off The Bulletin that the senator, ranking Republican member of the U.S. Senator Foreign Relations Operations Subcommittee and former chairman of the U.S. Senate Intelligence Committee, was indeed in Jerusalem.

Mr. Specter’s office did not announce the timing or purpose of the visit.

After The Bulletin sent 10 inquiries to know the purpose of the visit, Mr. invited The Bulletin and two other news agencies to meet with him at his hotel, where Pennsylvania’s senior senator made a dramatic announcement. He had been asked by Israeli Prime Minister Ehud Olmert to carry a message from Mr. Olmert to Syrian President Bashar Assad.

Mr. Specter, making his 17th journey to Syria, said that he would not disclose the message that he delivers from Mr. Olmert until Mr. Assad sees the letter.

Mr. Olmert, who has tendered his resignation under a cloud of corruption charges, has said he wants to use his remaining time in office to advance peace gestures with Syria, which has been in a state of war with Israel since the inception of the Jewish state in 1948.

Mr. Specter said Syria wanted the strategic Golan heights back, which was taken by Israel in the 1967 war, and the senator defined other conditions for peace with Syria. Those conditions are: allowing Lebanon to function as an independent nation, stop transferring Iranian arms to Hezbollah and to cut off aid to Hamas.

Mr. Specter turned to his aide and asked him to remind him to raise the issue with President Assad.

In a follow-up question, the Bulletin asked Mr. Specter if Syria was ready to change its new school books, which define Israel as “southern Syria”.

Asked if it would be possible to draw a wedge between Syria and Iran, Mr. Specter said that he thought “it would be very difficult” to draw Syria out of Iran’s orbit, because the ties go back “a long way.” But, he said, “it is an evolving picture, and interests change. I think Syria would definitely like a closer relationship with the US. I have always been an advocate of diplomacy.”

In addition to pushing for talks with Syria, Mr. Specter has for many years advocated talking with the Iranians. He took issue with a suggestion made earlier this month by House Foreign Affairs Committee chairman Howard Berman that any dialogue with Iran be of a limited duration, perhaps three months, so Tehran didn’t use it as cover to pursue their nuclear program.

“I think the dialogue ought to last however long the dialogue needs to last,” he said. “I would hope that it would last and be successful, and lead to diplomatic relations, and peaceful terms, and to a new Iranian president who doesn’t want to wipe Israel off the face of the earth, that’s what I would like.”

Asked whether the Iranians would use the talks as a cover to move their nuclear program forward, Mr. Specter said, “They are going to move that forward whether we like it or not”â€¨ â€¨Specter said that it needed to be communicated to the Iranians “in unmistakable terms that it is unacceptable for them to have a nuclear weapon, but I don’t think we are well advised to say anything beyond that. No threats, no implied threats, just that it is unacceptable.”

Regarding the current hostilities in Gaza, Mr. Specter said that he did not think Israel was using disproportionate force, and said Israel was just seeking to remove the Hamas threat.

Mr. Specter said he believed American support for the Israeli operation would continue, and President George W. Bush had made it clear Washington saw Hamas as the provocateur.

As the briefing drew to a close, the Bulletin asked Mr. Specter a question in the personal realm.

Since Mr. Specter has presented himself throughout his entire career as both and proud American and a proud Jew, how did he cope with meeting with some of the most virulent anti-semites of this generation?

Mr. Specter choked up for a moment and said he spoke with each of these leaders with “dignity and respect” with people whom you do not have to agree with and that his response to them is “cordial and blunt”.