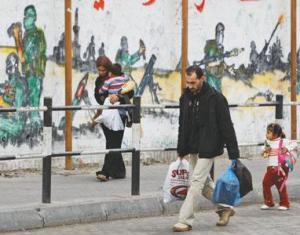 On March 11, 1978, Palestinian terrorists landed on an isolated beach located near Caesarea, where they murdered American nature photographer Gail Rubin, a cousin of the late U.S. Sen. Abraham Ribicoff, D-Conn. The terrorists proceeded to hijack a bus and murder 37 Israeli passengers aboard the vehicle.

This weekend, the Palestinian Authority celebrated this terror attack with an hour-long TV special, which included Palestine Liberation Organization (PLO) training camps, while featuring interviews with Palestinian terrorists who described the planning and implementation of the killings.

According to an excerpt of the program that was translated by Palestinian Media Watch (PMW), the narrator described the attack as “… one of the most important and most prominent special actions, executed by the Palestinian revolution by sea, on the coast between Haifa and Tel Aviv.

“This action, which was carried out by a group of heroes and led by the heroic fighter Dalal Mughrabi, had a great impact on continuing events of the Arab-Israeli conflict.”

The spokespeople of the outgoing prime minister, Ehud Olmert, who has often described the Fatah and the PA as “moderates,” were asked if they would issue a specific condemnation of the broadcast. No response was forthcoming.

Whenever this level of incitement has emanated from the PA, the standard response of Mr. Olmert’s spokespeople has been to “always ask the Palestinians to stop their incitement.”

However, during the three years of Mr. Olmert’s tenure, his spokespeople will not provide any record of his administration’s having issued a specific reprimand to the PA for their use of their official media organs to endorse terrorist attacks.