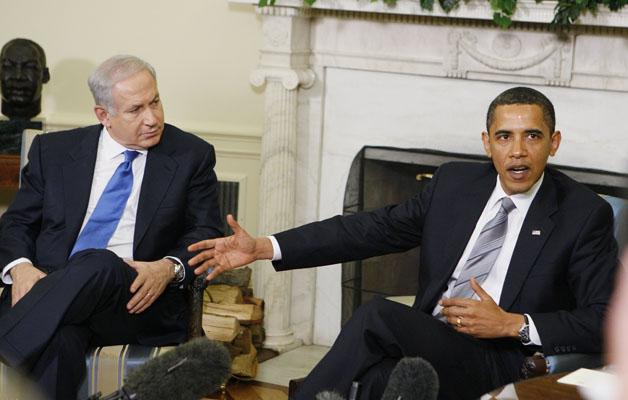 Israeli Prime Minister Benjamin Netanyahu and President Barack Obama met privately yesterday for their first summit, going beyond their scheduled time, before being joined by their advisers.

After the meeting, both leaders said they would work together to meet the challenges of the Middle East, including Iran.

Mr. Obama said the dialogue with Iran should have no time limit put on it and said he would like to see progress by the end of the year. If he does not see any progress, he will consider “other options” such as sanctions.

With regard to the Palestinian issue, Mr. Obama said he wants to see two states living side by side in peace.

Mr. Netanyahu, however, said he would like to see some sort of Palestinian autonomy, but stopped short of calling for an independent state.

He called for economic development and other assistance for the Palestinian Authority (PA) and emphasized that education for peace would be a primary concern, since the PA curriculum calls for Israel’s conquest and destruction.

At the press conference after the meeting, Mr. Netanyahu said he had asked Mr. Obama to consider the possibility an independent Palestinian state would use Gaza as a model and mount rocket attacks on the rest of Israel, from its safe haven in the West Bank.

Mr. Netanyahu has a full day ahead of himself today, since he is scheduled to meet with the leading lights of the American foreign and defense establishment throughout the day.

Prior to meeting with Mr. Obama, Mr. Netanyahu and his wife, Sara, arrived at Blair House, where foreign heads of state and dignitaries stay while they are meeting with the president.

Much of the prime minister’s first day in the U.S., in advance of the meeting, was devoted to preparatory consultations with his advisers.

Mr. Netanyahu, unlike his predecessors, decided to hold his consultations at the Israeli Embassy rather than Blair House due to wiretapping concerns.

“Netanyahu has red lines that he will not agree to cross by any means, even if the US administration should try to pressure him,” a senior source in the prime minister’s entourage said.

Mr. Netanyahu intends to establish red lines with the Obama administration when it comes to the Iranian nuclear threat and establishing a Palestinian state.

“On both these issues, the U.S. is in the bleachers; whereas, Israel is on the playing field,” the source said.

“The nuclear issue will be at the focus of the prime minister’s statements in the White House, which is an existential matter for Israel,” Dr. Arad said during a briefing for Israeli journalists at the entrance to Blair House.

The escalation in the Israeli statements could be felt clearly.

“America may be the surgeon, but Israel is lying on the operating table. A Palestinian state in the West Bank that could turn into Hamastan is absolutely unacceptable,” a senior Israeli source said.

However, the senior Israeli source emphasized, Mr. Netanyahu will make an effort to reach understandings with the administration.

“Israel understands that it must take into account the American interests in the region, including Obama’s firm decision to pull U.S. troops out of Iraq,” the senior source said.

On the Palestinian issue, Dr. Arad said differences of approach could arise on both sides, but he hoped it would be possible to reach a practical approach to promoting negotiations with the Palestinians.

Officials in Mr. Netanyahu’s entourage are angry with the Obama administration’s behavior in recent weeks.

“While we showed restraint, at the administration’s request, and did not wage a campaign, the administration conveyed aggressive messages towards the Israeli government on several occasions,” sources in the entourage said.

This peaked with a New York Times editorial that was published this week, which was inspired by administration sources. It warned Mr. Netanyahu not to entangle the U.S. in a war with Iran.

Mr. Netanyahu, however, does not intend to “entangle” the U.S. Rather, he wants to make a friend in the White House, so the continuation of the visit runs smoother, more pleasant and more favorable, just like Israel is accustomed to in the United States.