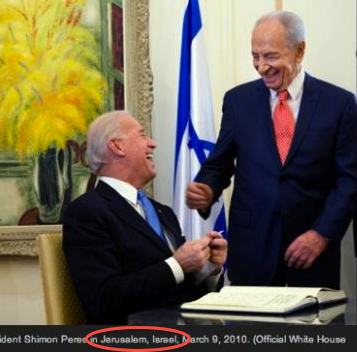 On Tuesday, The Weekly Standard’s deputy online editor, Daniel Halper, made a noteworthy charge against the White House.

Following an article in which he discussed the ongoing debate over which country the U.S. believes Jerusalem is in (hint: It’s not Israel), Halper claims that the White House “cleansed” its site of references to the city being definitively tied to the Jewish homeland.

QUESTION: What is the State Department’s position regarding American persons born in Jerusalem who wish to have passports issued that indicate their place of birth as Israel?

ANSWER: Current U.S. Government policy is that U.S. citizens born in Jerusalem may not have “Israel” listed in their passports as their place of birth. See the U.S. Department of State’s Foreign Affairs Manual 7 FAM 1300 Appendix D for further details.

While the U.S. is clearly undecided on the issue, Halper highlights a photograph on the White House web site that, until last evening, allegedly had a caption that included “Jerusalem, Israel” (i.e. admitting that Jerusalem is a part of Israel). Following Halper’s article, the image’s caption (by his account) changed. Here’s the original image (notice the reference to Jerusalem, Israel): Halper claims that he posted this image at 3:33 p.m. on Tuesday. Then, he writes, “Within two hours of posting, the White House has apparently gone through its website, cleansing any reference to Jerusalem as being in Israel.” Halper claims that the image was replaced with the following (notice “Israel” has been removed): Below, watch a video montage that purportedly (and quite dramatically, based on the background music selection) shows other changes, in this same vein, the White House has made:

Upon a cursory search on the WhiteHouse.gov site, The Blaze uncovered only one reference to “Jerusalem, Israel” (see the screen shot below). Interestingly, this reference is present in a State Department official’s biography and it highlights a location (Jerusalem, Israel, of course) at which the individual (Adrienne Fagler) plans to serve the U.S. government: If the government did, indeed, remove the references as stated, the action is bizarre. However, it’s not unexplainable. As mentioned, at least one reference still places Jerusalem in Israel (a fact the government, itself, has officially disputed pending Middle East negotiations). Either way, messages seem to be crossing, criss-crossing and, quite potentially, getting purposefully removed from the record.

Perhaps the White House is afraid that any mentions it makes of the city’s placement within Israel will contradict its policies and rhetoric. At the end of July, The Blaze covered the ongoing debate surrounding Israeli-American passports.

Despite a 2002 law requiring it to do so, thus far the federal government has refused to allow those born in Jerusalem to have “Israel” printed on their travel documentation. Now, the case is headed for court and it could have a profound impact on how the U.S. government officially recognizes Jerusalem moving forward.

The perfect motivation to remove the connection between city and nation from its web site? Quite possibly.