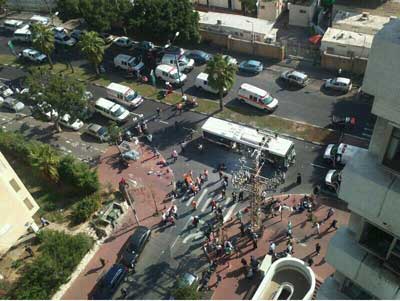 As photographs of a triumphant US Secretary of State Hillary Clinton made international headline news following her mediation role in the Israel and Hamas truce–which had already seen 12 Gaza rockets fired at Israel within the first two hours–Tel Aviv was not in the spirit to celebrate.

Shortly before the ceasefire went into effect at 9 pm Israel time, the corner of Shaul Hamelech and Henrietta Szold streets in central Tel Aviv where the bus bombing had taken place earlier, were still teeming with press and people. The bombing which had left 28 people wounded, mostly young people in their 20s and 30s as well as teenagers, was praised by a Hamas spokesperson as a “blessing.” Other Gaza terror groups like Islamic Jihad and Popular Resistance Committee also celebrated the terror attack in press interviews, with Islamic Jihad saying “this is a victory for the blood of shahids.”

For Gadi, an older security officer standing outside a Tel Aviv office building, the bus bombing was terrifying. “It was terrible to see,” he told Tazpit News Agency. “There was blood everywhere. I saw a young woman with her hand blown off, and another man whose foot was severed.”

“At first, when I heard the explosion, I thought it was a rocket that had landed without the sirens going off. I couldn’t understand what had happened until I went to the terror scene at the bus station. It was full of smoke and the smell of gas,” Gadi said. “It’s very hard for me to describe the casualties-the images are hard for me to deal with,” he says as he lights a cigarette, starting on his second box of the day.

“Something must be done about this, we need to be strong and show these terrorists we are strong,” emphasizes Gadi. “I hope we don’t go back to the old times.”

For Michal, a 27-year old history student at Tel Aviv University, who arrived on scene an hour later working as a producer for a local TV station, the bombing brought back memories of her childhood growing up in Jerusalem. “It was just like the 1990s, when I was in eighth grade and there were suicide bus bombings all the time,” she said. “Seeing the images of this bus today, made me go back in time.”

“I saw even worst terror attacks growing up in Jerusalem,” she added. “Thank God there was no one killed in this attack.”

The Tel Aviv terror victims were evacuated to a nearby hospital, where three who had serious wounds to their limbs underwent surgery today. Their conditions are now listed as moderate.

At an Italian pizzeria not too far from the attack, diners sat somewhat subdued as the TV in the background broadcasted Hillary Clinton shaking hands with PA President Mahmoud Abbas. “When will all this end already?” exclaimed one Israeli to another. “Politicians shaking hands has never ended terror.”