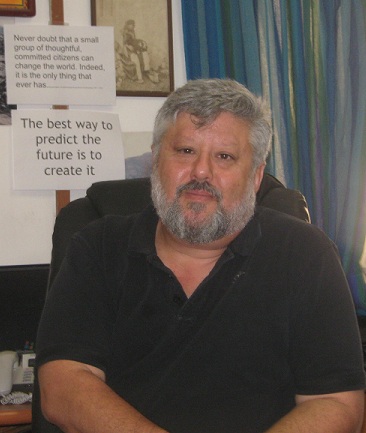 [ Editor’s Note:*As PA President Mahmoud Abbas is set to renew his bid for a PalestinianState at the UN Generral Assembly next week on November 29, it is worth reprinting this piece I wrote August 15, 2009 after attending a Peace conference put on by the Israel-Palesitne Centre for Research and Information. Gershon Baskin, who is on the far left in Israel and who is no longer co-Ceo of that organization said then that it was his idea to have the Palesitnians take this route to the UN. Baskin has since been credited as being the link between Israel and Hamas, whose back channel negotiations resulted in the release of Gilad Shalit by Hamas. From that day after hearing Baskin speak in August 2009, I understood well that the Palestinians were not going to be interested in conducting bilateral negotiations with Israel, even when Netanyahu later gave a 10 month moratorium on settlements, as it was clear that their strategy was to go to the UN and try to get a state unilaterally, without having to go through the necessary compromises to get a real agreement. In 2009, Baskin spoke of the possibility of the United States supporting this at the UN Security Council, but this did not come to pass. That is why Abbas wants to go now to the General Assembly, which will not lead to a state on the ground, but will enable the Palestinians to attempt to Israel at the International Criminal Court ]

Gershon Baskin, Co-CEO of the Israel-Palestine Centre For Research and Information [IPCRI]said that that he was the one who “put forth” the idea to European Union Foreign Policy chief Javier Solana of having the United Nations Security Council recognize a Palestinian state, even if an agreement is not reached between Israel and the Palestinians.

Baskin told an IPCRI conference entitled “Education for Peace” on August 8 in Beit Jalla, at Talitha Kumi near Bethlehem that “He [Solana] heard it first from me, but it’s fine, let Solana get the credit.”

Baskin said under the proposed plan the United States would not use its veto power to prevent the U.N. Security Council from recognizing the existence of the State of Palestine within provisional borders.

Baskin told the conference that about two weeks ago he met for “secret talks in the U.S.” with five Palestinians, five Americans and five Israelis.

“[PA President] can submit a request [to the U.N. Security Council]that the State of Palestine become a member state of the U.N., and if the U.S. does not veto this, all of the Security Council members will vote in favour,” said Baskin, noting that currently the Palestinians only have observer status at the U.N.

“[PA President] can submit a request [to the U.N. Security Council]that the State of Palestine become a member state of the U.N., and if the U.S. does not veto this, all of the Security Council members will vote in favour,” said Baskin, noting that currently the Palestinians only have observer status at the U.N.

After passing the Security Council, the State of Palestine would be recognized by the U.N. general Assembly and “from that moment, the State of Israel is now occupying the entire member state of Palestine,” he said. He added that once that happened the U.N. could create a mechanism to send in international forces to implement the two state solution, with Jerusalem as a capital for both states.

In addition to putting forth this idea to Solana, Baskin told the conference that he has presented his plan to the Americans. When asked specifically to whom this was sent, Baskin replied that his plan was presented to two Deputy Secretaries of State to Hillary Clinton, and was also sent to the office of Special Envoy to the Middle East George Mitchell.

On June 13, Ha’aretz reported that Soalana said in London that “After a fixed deadline, a U.N. Security Council resolution should proclaim the adoption of the two state solution.”’

It further reported that Solana said “It [the U.N.] would accept the Palestinian state as a full member of the U.N. and set a calendar fro implementation.”

Baskin’s plan was presented at the conference through the use of a power point presentation which can be viewed at:
http://www.ipcri.org/files/ending.pdf

In an abstract of his talk, Baskin noted that in his view “there will not be any successful bilateral Israeli-Palestinian negotiations at any time in the near future.”

In his view, the only possible plan is one whereby the international community imposes a Palestinian state on Israel.

Baskin also said that he spoke in Brussels [in the Parliament-I think but am not certain] and proposed that both Palestine and Israel ought to be granted EU status, which would give both sides a large incentive to approve of the two state solution ‘It wouldn’t be a big deal if a Palestinian worked in Tel-Aviv, when he could also work in Vienna.” But Baskin added that the Europeans he’d spoken with weren’t interested ” in having either of us join.”

Baskin noted that once the U.S. and U.N. take steps to recognize a Palestinian state, the peace camp in Israel will be able to rally around it and be revived.

He also proposed that once this happens, the PA ought to declare new elections (after a Palestinian state became a member of the U.N.)

Baskin also said that in the November 1988 Palestinian Declaration of Independence, declared at the PLO summit in Algiers, a reference was made to the U.N. resolution 242 and that therefore Israel was recognized by the PLO.

The IPCRI session was attended by Israelis and Palestinians

[Gordon Barthos, the correspondent for the Toronto Star, who covered that conference in Algiers, reported that there was no such PLO recognition of Israel at the Algiers conference]