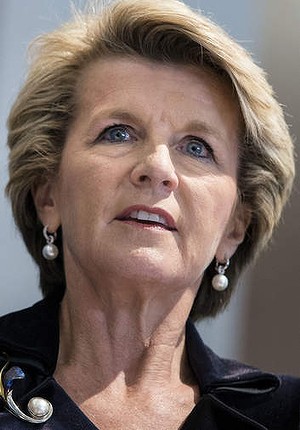 Julie Bishop had some sensible things to say in Jerusalem, as she broke ranks from a cosy, normally unexamined international consensus: the idea that, by permitting Jewish residence in the West Bank, Israel is violating international law.

Asked if she agrees Jewish communities located beyond the Arab/Israeli 1949 armistice lines are illegal, Bishop replied: “I would like to see which international law has declared them illegal.”

Her reply has drawn attacks from perfervid Palestinian spokesmen – such as Palestinian Authority veteran official Saeb Erekat – who cite Article 49 of the Fourth Geneva Convention. But what does Article 49 actually say?

Drafted to outlaw the horrors of Nazi mass deportations, Article 49 prohibits “individual or mass forcible transfers, as well as deportations of protected persons from occupied territory to the territory of the occupying power or to that of any other country, occupied or not”. It ordains that “the occupying power shall not deport or transfer parts of its own civilian population into the territory it occupies.”

The West Bank, illegally seized by Jordan in 1948, captured by Israel following Jordanian attack in 1967, is unallocated territory under international law. Only Israeli annexation or an Arab/Israeli agreement could alter its status – neither of which have occurred. In short, Article 49 has no bearing on the situation, as it deals solely with sovereign territories.

The original international decision at the 1920 San Remo Conference earmarking this territory for Jewish settlement has never been superseded by an internationally binding agreement. The 1947 UN partition plan, which sought to create Arab and Jewish states, could have been such an agreement, but it was rejected by the Arab powers and Palestinian Arabs. Being a UN General Assembly resolution, the plan had no legal force of its own.

In contrast, the 1993 Oslo Accords do possess legal force, but as these contain no prohibition on the existence and growth of these Jewish communities, Jewish rights remain unimpaired. Whatever one’s view of the conflict, all should be able to agree on this. Yet Erekat denies it, even though the Palestinian Authority he represents signed the agreements.

He cited two other legal sources: the 2004 International Court of Justice (ICJ) advisory opinion, and the 1998 Rome Statute of the International Criminal Court. He didn’t mention that the ICJ opinion was advisory and therefore non-binding, nor the perversion of legal norms by which it arrived at its conclusion – the ICJ opted to spuriously invest a General Assembly resolution with the authority for a legal determination of this kind.

The Rome Statute, which Erekat says makes Jewish settlement illegal, says nothing about Israel or the territories in question. It reiterates the Fourth Geneva Convention’s prohibition on transfer of populations. It seemingly widens the scope of “transfer”, by adding “directly or indirectly”, but if compulsion is the touchstone, these qualifiers change little. But even if they did, some 40 countries, including free societies such as India, Israel and the US, have either declined to sign or to ratify the Treaty, making its application here nugatory.

Erekat is also incorrect to assert that the Abbott government’s position represents an aberration. While differing from her predecessor, Bob Carr, Bishop’s position is consistent with Australia’s historic bipartisan stand.

Bishop was right to dismiss the notion that Jewish residence in the West Bank is illegal as the flat-earth assertion that it is. Inasmuch as this fiction inflames Palestinian ambitions to delegitimise Israel and uproot hundreds of thousands of Jews, it presents a profound obstacle to peace settlement.

Daniel Mandel is director of the Zionist Organization of the US’s Centre for Middle East Policy and author of H.V. Evatt and the Establishment of Israel (Routledge, London, 2004).