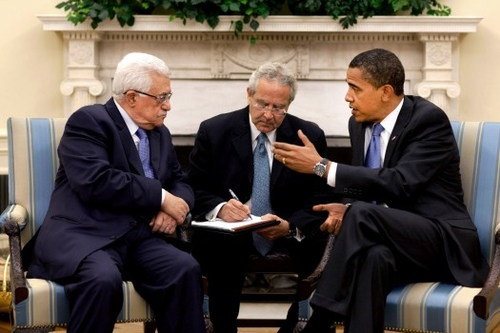 Question #1: Does Israel have a right to exist?

There seems to be a double-standard when it comes to how Israel’s Prime Minister, Benjamin Netanyahu, and the Palestinian Authority’s erstwhile President, Mahmoud Abbas — now in the tenth year of his four-year term — are treated by the Obama White House, as well as by many journalists. While Netanyahu is humiliated, insulted, threatened, and told that he must make “painful concessions” for peace, such as releasing more than 100 terrorists merely to get the Palestinians to come to a negotiating table, Abbas – a facilitator and supporter of these terrorists – is treated with kid gloves, and with Obama virtually begging him to visit. Here, however, are some questions, starting with the most important, that should be posed to Abbas when he takes a seat in the White House on March 17:

It would be telling to hear how Abbas answers these questions.

It would also be telling to hear how President Barack Obama answers one question: If Abbas refuses to agree to these “painful concessions,” will you stop issuing executive waivers that enable American taxpayer money to still be sent to him, even though you know it is being used for prohibited purposes?

John Ryan, a journalist based in the US, also writes for The Daily Caller.