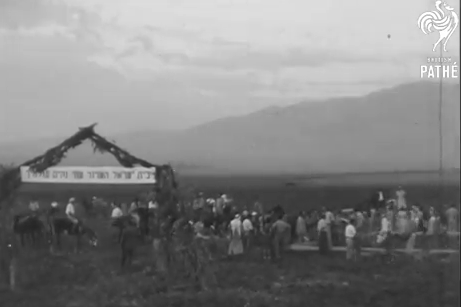 The picture on the main page is of an Arab peasant tilling his field with a primitive plough, and two women sitting on the ground near by, talking.

However, it is simply the opening photo of a film that deals with many aspects of life in Palestine at the time it was taken.

With this photograph, we introduce readers to one of the the latest archives released online — British Pathé — with its 85,000 newsreels uploaded to YouTube in April 2014.

Historians will have a field day.

This Israel Daily Picture site presents early photographs and films and ends its research at the 1940 point.

The British Pathé films include many films on the struggle to bring Jews into Palestine in the 1940s and the 1948 Arab-Israeli war.

We were intrigued by one 8-minute silent film entitled Peasant Farmer Plugs Field With Bullocks, 1940. and suggest you click here and see it.

The film opens with the above picture of an Arab peasant and his wife (wives?) and plough.

But after that 10-second segment the films shows Jewish settlers building a new community in the Galilee, Jewish farmers plowing and irrigating their fields, a street scene in what appears to be Tel Aviv, Jews praying at the Western Wall, doctors and students on Mt. Scopus’ Hadassah Hospital and Hebrew University.

There are also segments showing the Arab shuk and the Dome of the Rock on the Temple Mount.

The Jewish version of a “barn-raising” in what appears to be a new settlement in the Jezreel Valley (British Pathé newsreels, 1940)

We invite readers to identify the location of the “barn raising” photo above and to “plow” through other films to find noteworthy scenes.