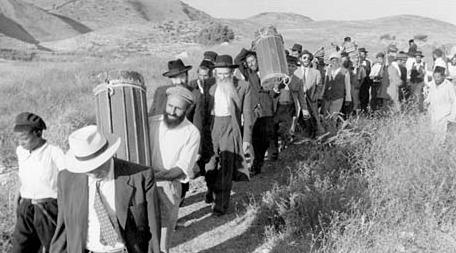 There are two ironies concerning refugee flows in the Arab world. The first is how selective some Western advocates are when they focus exclusively on displaced Palestinians and Palestinian refugees, and the second is how they effectively punish those countries which do the right thing and absorb and settle refugees rather than using them as a political pawn.

Attending the concurrent NGO fair, I spent some time at the booth of the Association des Marocains Victimes d’Expulsion Arbitraire d’Algérie (AMVEAA). Basically, there story is this: On December 18, 1975, the Algerian government expelled 45,000 families—about 500,000 people—who were legally resident in Algeria, and many of whom had lived in Algeria for decades. Houari Boumediene, the chairman of Algeria’s Revolutionary Council, ordered the Moroccans detained and expelled in response to the Moroccan “Green March” into the Western Sahara.

The condition of the Moroccans’ expulsion was appalling, and it was done without prior notice. Algerian police hunted down Moroccans wherever they could be found and dumped them across the border. Many Moroccans died, and the humanitarian crisis caused by hundreds of thousands of individuals strained the Moroccan government. Meanwhile, the deportation split mixed families, and the expelled Moroccans lost pensions, and left behind bank accounts and personal property.

AMVEAA wants restitution for lost property and cites language from the UN’s Committee on the Protection of the Rights of All Migrant Workers and Members of Their Families to support their claim.

Realistically, the chance they will collect is between zero and null. But, their case does illustrate just one more case—the mass expulsion of Jews from Arab lands following Israel’s independence being the other—of the hypocrisy of the refugee issue. The 500,000 persons expelled from Algeria are greater than the 472,000 Palestinians which the United Nations Mediator on Palestine concluded had left Israel in 1948.

Israel, however, settled the refugees as did Morocco. They are cases to be celebrated, and examples of responsible governance. Why the world continues to subsidize Palestinian refugees rather than disbanding the UN Relief and Works Agency (UNRWA) and handling management of any remaining issue to the United Nations High Commissioner for Refugees is beyond any logic and, indeed, UNRWA’s founding purpose.

Whether or not Algeria comes clean on its actions taken against the backdrop of Cold War animus, let us praise the Moroccans for doing the right thing. It’s time to recognize that Rabat and Jerusalem represent the best practices in refugee resettlement, and UNRWA the worst. Let’s replicate a model that works, and recognize UNRWA not only betrays Palestinians, but refugees around the world, many of whom desperately need aid not to build rockets but rather to get their lives restarted after suffering dislocation and tragedy.