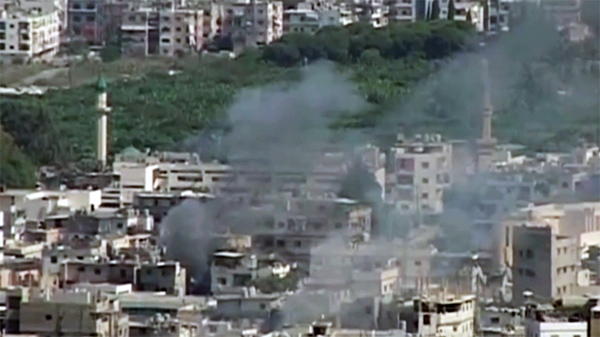 [UNRWA pleads for funds from donor nations. UNRWA policies have fostered a paramilitary presence in UNRWA facilities. Those policies should be challenged by UNRWA donors when asked to collect funds for UNRWA.- David Bedein ]

Palestinians are once again paying a heavy price for allowing terror groups and armed gangs to operate freely inside their communities. But this is not happening in a refugee camp in the West Bank or the Gaza Strip. Rather, it is taking place in Lebanon, one of three Arab countries that host hundreds of thousands of Palestinians.

This explains why the international media and human rights organizations have shown little interest in what is happening inside the largest Palestinian refugee camp in Lebanon, Ain al-Hilweh.

For the past two weeks, dozens of Palestinian families from Ain al-Hilweh have fled their homes after fierce clashes that erupted between Fatah militiamen and terrorists belonging to a radical Islamist gang affiliated with Al-Qaeda and Islamic State.

The UN Security Council has clearly not heard of the fighting in Ain al-Hilweh. That is why it has not even issued a statement expressing “concern” over the plight of the Palestinians in the camp.

The international media, for its part, has thus far shown little interest in the story. Why? The answer, as usual, is simple: No Israeli involvement.

The 120,000 Palestinians living in Ain al-Hilweh are “unfortunate” because they are not being targeted by Israel. Otherwise, there would have been an international outcry and the UN Security Council would have held an emergency session to condemn Israel and call for an immediate cessation of hostilities.

But, because Israel cannot be blamed, Palestinians killing Palestinians is not something that the international media and community are interested in.

The clashes in Ain al-Hilweh have so far resulted in the killing of four Fatah militiamen. At least 35 people were wounded in the fighting, which has been described as the worst in years. According to eyewitnesses, the rival parties have used various types of weapons to attack each other, including rocket-propelled grenades.

The four dead men have been identified as Fadi Khdeir, Ala Othman, Rabi Mashour and Hussein al-Saleh.

Palestinian refugee camps in Lebanon have always been considered “extraterritorial” zones, managed exclusively by various armed groups. The Lebanese police and army have no role in maintaining law and order inside the camps. As in most similar situations, where armed clashes have erupted inside refugee camps, all that is left for the Lebanese Army to do is monitor the situation from a distance.

In 2007, however, the Lebanese Army was forced to intervene to stop armed clashes at another refugee camp, Nahr al-Bared. Dozens of people, many of them soldiers, were killed in the fighting, which also resulted in the near destruction of the camp. Nearly 30,000 Palestinians were displaced, and Nahr al-Bared remains a closed military zone.

Residents of Ain al-Hilweh are worried that they will meet the same fate as Yarmouk refugee camp in Syria. Yarmouk was once home to some 200,000 Palestinians. Today, the number of the residents has dropped to 12,000. Hundreds of Yarmouk residents have been killed and injured in fierce fighting between rival militias during the past four years. The Syrian Army has also been dropping barrel bombs on the camp almost on a weekly basis.

Yarmouk, Nahr al-Bared and Ain al-Hilweh continue to pay an extremely heavy price for agreeing to turn their camps into military bases. Most of the Palestinian camps in Lebanon and Syria have long served as large weapons warehouses controlled by various militias belonging to different groups. This has been happening while the United Nations Relief and Works Agency for Palestine Refugees in the Near East (UNRWA), which is formally in charge of the refugee camps, continues to look the other way.

As the fighting in Ain al-Hilweh shows, the Palestinians have once again fallen victim to what many of them describe as the “chaos of weapons.” It is this type of anarchy that allowed Hamas to expel the Palestinian Authority from the Gaza Strip in 2007. Refugee camps in the West Bank and Gaza Strip are also full of weapons and gunmen belonging to various groups, including Fatah and Hamas.

Maher al-Shawish, a Palestinian writer and political analyst from Lebanon, says that Ain al-Hilweh is now facing a serious humanitarian crisis due to the ongoing fighting. “If you see the destruction inside the camp, you will realize that it is facing a real catastrophe that needs to be stopped immediately,” al-Shawish said. “The clashes are disgraceful for the Palestinian cause.”

But instead of admitting their responsibility for turning the camps into military bases, Palestinian leaders often prefer to blame others, preferably Israel, for the plight of their people.

Ain al-Hilweh may soon fall into the hands of Al-Qaeda and Islamic State terrorists. Yet instead of facing this threat and calling on the international community to assist in foiling the terrorists’ plan, Gen. Subhi Abu Arab, a top Fatah security commander in Lebanon, chose to hold Israel responsible. Needless to say, Israel has nothing to do with the latest round of fighting in Ain al-Hilweh or the “chaos of weapons” inside Palestinian refugee camps.

Still, Palestinian officials such as Gen. Abu Arab never miss an opportunity to lay the blame at Israel’s door. They also continue to lie to their people by claiming that Israel is behind Islamic State. Referring to the clashes in Ain al-Hilweh, Gen. Abu Arab had no problem explaining that, “This is a Zionist scheme to eliminate the right of return, displace the Palestinians and stir trouble inside the camp by using a fifth column.”

As long as Palestinian and Arab leaders continue to believe conspiracy theories and refuse to wake up to the reality of the dangerous situation inside the refugee camps, the Palestinians of Ain al-Hilweh, like those of Yarmouk, sadly will face a bleak future.