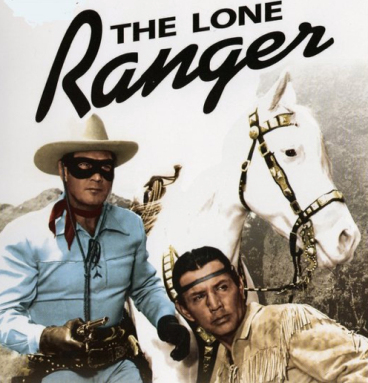 Most probably only those of a certain vintage will remember the exploits of the Lone Ranger and his faithful sidekick.

Therefore for the benefit of everyone else here is a short summary by courtesy of Wikipedia.

The Lone Ranger is a fictional masked former Texas ranger who fought outlaws in the American West with his Native American friend, Tonto.”

In the days when comics were all the rage and radio serials kept kids enthralled, the adventures and exploits of this duo were avidly followed by countless fans. These two heroes have long since faded into history.

However never fear because it seems that there are several candidates vying to resurrect them and who see themselves as worthy successors.

Heading the list are undoubtedly two of the leading candidates, namely Barak Obama and his trusty friend, John Kerry. Given their overwhelming urge to confront Jewish “outlaws” in the Israel West (Bank) while at the same time turning a blind eye to the blatant incitement generated by the real villains in Ramallah, this fearless couple gallop forth at every opportunity. It is most probably more accurate to describe Kerry as the Lone Ranger and Obama as his Native American friend. Having already described Jews living in Judea, Samaria and half of Jerusalem as illegitimate and therefore in their eyes, outlaws, it is no surprise that every time Israel takes steps to defend itself from the real outlaws, that these two immediately invoke moral equivalency when condemning violence.

Instead of running the real criminals out of town and insisting on a complete cessation of terror they shoot from the lip and imply that both sides are equally guilty of incitement and unnecessary force. Thus men, women and children targeted for murder are placed on an equal footing with the perpetrators. Instead of cutting off the funding which enables Abbas and his band of bandits to pay murderers pensions while incarcerated in Israel, reward families for encouraging martyrs, produce textbooks which promote hate and delegitimisation, name squares, schools and summer camps after terrorists etc. the current lone ranger and his faithful assistant ignore the obvious. Mounting their trusty steeds they ride to the rescue by placating those causing terror and criticize those defending themselves. Oh yes, they pay lip service to the right of self-defense but then put their feet in their mouths by asserting that both sides are contributing to the ludicrous misnamed cycle of violence.

Kerry’s idea of “cautious optimism” (his own words) is to call on Israel to “rekindle” the peace talks and in this he is joined by other side kicks. His definition of success is to state that Moslems have a fundamental right to pray on the Temple Mount. Note Mount not Mosque. Non Moslems, that is Jews and Christians only have the right to visit. By surrendering to this intolerant Islamic vision of religious freedom at Judaism’s holiest site thanks to spineless political and religious leadership, we have given carte blanche permission for future “triumphs.”

When faced with real outlaws out west, these latter-day rangers, instead of confronting and outlawing them prefer to holster their weapons and engage in verbal acrobatics. The resultant outcome is usually surrender to thuggery and terror and a worse mess further down the track. Meanwhile the two Lone Rangers have ridden into the sunset claiming a glorious victory and waiting for the next inevitable debacle.

Two lesser candidates for the title of Lone Ranger and Tonto are New Zealand’s Foreign Minister, Murray McCully and his colleague, Jim McLay, ambassador to the Palestinian Terrorist Authority. Having nearly completed one year of a two year membership of the UN Security Council, the former feels an overwhelming urge to make a splash and go where angels fear to tread while the latter needs to prove that being accredited to a terror inciting entity entitles him to overlook and excuse blatant banditry. Their recent statements and proposed resolution display an overwhelming blindness as to the realties here. Nevertheless, emulating the lone ranger and his friend, they gallop on regardless. Evincing friendship for terrorist supporting leaders and victims alike their fruitless and futile gestures will meet the same fate as all previous attempts to broker peace.

What seem to have escaped these two would be rangers are the stark facts of the situation. Instead of demanding an immediate cessation of glorification of terror and martyrdom they remain silent. Instead of insisting that all those who deny the legal and historic Jewish connection to this Land and who write Jews out of Jerusalem, the two Macs talk about confidence building measures which is really a coded diplomatic way of saying that Israel must appease terror. They do not seem to have woken up yet to the fact that every confidence building measure Israel has made in the past has resulted in more terror, rockets and murder. How many times can one make the same mistake? Endlessly it seems listening to these two.

Meanwhile the latest breaking news reveals that Abbas has rejected McCully’s request that he refrain from taking steps at the International Criminal Court against Israel. Not only has he dismissed this idea but has instead told the UN Human Rights Council that Israel is “killing unarmed Palestinians, terrorising our people and detaining their corpses” and that they need international protection. As I read this latest example of hypocrisy, breaking news informed us that yet more stabbings of Jewish civilians were occurring, no doubt by Abbas’s “unarmed” followers.

The third candidate for Lone Ranger status is Ban Ki Moon. His trusted backup is the UN General Assembly, the EU and associated bodies where the immoral majority rules. Mounting his old grey mare and armed with worthless resolutions, the UN Secretary General dashes hither and thither spreading ineffective platitudes in his wake. Rather than confronting those causing terror head on he prefers like others, to spread the blame evenly. That means equal culpability for terrorist and victim. It reminds me of the story of the son who murdered his parents and then plea bargained to the court that he should be excused because he was now an orphan. In our case the UN exonerates the murderer and blames the victim. As the top representative for this corrupt outfit one would expect that Ban would expose the ongoing farcical situation. Instead he mounts his trusty steed yet again and fires blanks in all directions.

What do all these aspiring Lone Rangers have in common?

Without exception they are deaf and blind to what is actually happening. None of them wants to be confused by what is taking place. All of them believe that they alone hold the key to Middle East peace and that this key is appeasing the terrorists at the expense of the region’s only real democracy. They ignore nearly a hundred years of hate and terror. Not surprisingly they also miss and deliberately ignore the overwhelming evidence staring them in the face. Settlements, so-called occupation and other dredged up excuses have absolutely nothing to do with the lack of peace in our area. Frustration, lack of peace talks and two State solutions are also red herrings.

The bottom line is indeed very simple. The Palestinian Arabs and their supporters cannot tolerate any sort of Jewish presence in our homeland. Unless and until that simple plain fact is internalized nothing worthwhile can be achieved.

The original Lone Ranger and Tonto would by now have chased the real outlaws out of town and restored law and order. They would have been thoroughly ashamed at the pathetic antics of today’s self appointed sheriffs.