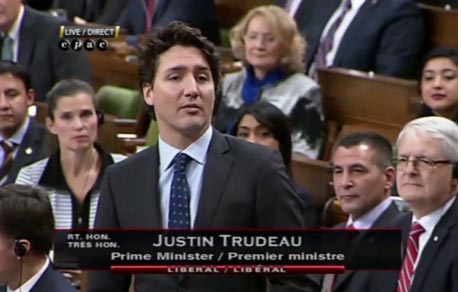 Canadian Prime Minister Justin Trudeau was put on the spot Tuesday by Interim Opposition head Rona Ambrose over reports that he plans to give UNRWA $15 million, despite its well-documented ties to the Hamas terrorist organization in Gaza.

But as video from her question in Canada’s parliament shows, Trudeau gave a truly baffling response to her concerns that vast funds of Canadian tax-payer money will be transferred indirectly to the hands of terrorists. Click the image below to watch the exchange, posted Wednesday on UN Watch’s official Facebook page.

Ambrose, an MP of the Conservative Party, noted how UNRWA was documented storing Hamas rockets and weapons “designed to kill Israeli citizens” – as even the UNRWA chief admitted last June – and likewise has actively taken part in inciting anti-Semitic violence.

In his complete dodge of the serious question, Trudeau noted that he welcomed UN Secretary-General Ban Ki-Moon to Ottawa last week, and vowed that Canada is “open to reengaging with the world” in a positive manner, while voicing his support of the “good work” of the UN.

He also promised to look at “things” the past government canceled for “political reasons,” apparently referring to how the previous pro-Israeli government cut funds for the Hamas-linked UNRWA in 2010.

Trudeau has raised various question marks vis-a-vis Hamas. He appointed Omar Alghabra as Parliamentary Secretary to the Minister of Foreign Affairs; Alghabra was previously the head of the radical Canadian Arab Federation (CAF), which ran afoul of the state for its open support of Hamas.

His behavior led Canadian journalist Ezra Levant, co-founder of The Rebel Media, to call Trudeau “stupid” in January, quipping that he doesn’t know “the difference between Hamas and hummus.”

Trudeau’s statements on Hamas this week were far from his first questionable remarks; on International Holocaust Remembrance Day late last month he made no mention of Jewish victims of the Holocaust or anti-Semitism in a statement released in honor of the day.