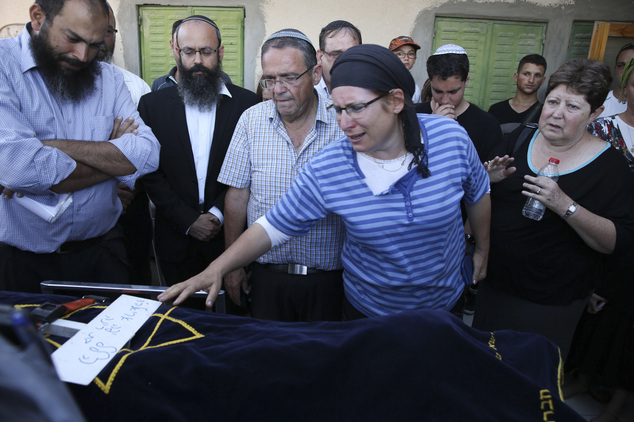 Amichai Ariel, Hallel’s father, has locker at the Alon Shvut pool near my locker.

Amichai’s father, may he rest in peace, wrote an lively column about every aspect of Israel from his home in Naharia in HaAretz and a number of newspapers in Israel. I would often recall that Yehudah Ariel help me learn and use Hebrew in my first stages in Israel more than forty years ago.

Ariel’s articles exuded a love of the land.

Hence, the choice of the name Amichai for his son – “My people live”.

Yet inspiration for Hallel’s murder is not hard to discern.

The new curriculum of the Palestinian Authority and UNRWA are not only laced with hatred. Their schools now convey a war education curriculum, with special emphasis on the “values” of martyrdom, Jihad, demonization of Jews, and liberation of Palestine by force of arms. Meanwhile, the praise of anyone who will murder a Jew permeates every aspect of the Palestinian Authority and UNRWA. http://israelbehindthenews.com/israel-jews-palestinian-authority-pa-schoolbooks-de-legitimization-demonization-advocacy-violent-struggle-jihad-martyrdom-right-return-instead-peace/14834/

While Israel post 1967 confiscated all such schoolbooks of incitement, Israel post 1994 allowed introduction of schoolbooks of war into the PA/UNRWA curriculum, while the Jewish state handed over Israeli owned radio and TV frequencies for use of the PA, with no restrictions from Israel.

Successive Israeli governments may have argued over issues of sovereignty in Jerusalem, Judea and Samaria.

However, no Israeli government has had the courage to call for an overhaul of the new Arab war education system, which can readily be discerned.

No Israeli government has yet called for the removal of the Israeli frequencies, which have been abused by the PBC TV and PBC Radio.

Instead, successive Israeli governments have chosen to abide by the spirit of the failed Oslo process from twenty years ago, which recognized PLO sovereignty over the Arab population, despite the fact that the PLO covenant of war against Israel remains in place.

The Israeli government will not act to end to the current ethos of the PA and UNRWA school system.

The Israeli government will close the spigot to the PA or UNRWA.

After all, tenured Israeli government officials now in power at the Ministries of Defense, Foreign Affairs, Justice and Communications were appointed during the Oslo era, while the lingering effect of the Rabin assassination has quashed rational dissent against the Oslo process for more than 20 years. And the legacy of Peres lingers on. http://israelbehindthenews.com/?s=peres+legacy

The time has come to demand that their western donors, beginning with the biggest contributor, the US, to condition funds for the PA and UNRWA on the removal of school books and school curricula and official media which carry a message of war against Israel.

Israel can now remove web sites of UNRWA and the Palestinian Authority Ministries of Education and Communication.

The endorsement of murder and demonization of Jews is simply not an acceptable form of free speech.

How can anyone stand by and allow the PA and UNRWA to broadcast a message of endorsement of the murder of 13-year-old Hallel Ariel?

IF the Israeli government cannot close down their means of incitement communication, then it devolves on private initiative to fight back.

Hallel was a US citizen. Her family who arrived from the US did not come to Israel to be stomped upon.

Following the PA endorsement of Hallel’s murder, no PA website should be left alive.