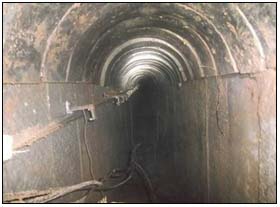 An excerpt from an upcoming documentary on the relationship between the Hamas terrorist organization and UNRWA shows Gazan children being led into a mock terror tunnel, where they are taught how to attack an Israeli kibbutz.

“The UNRWA kids were recruited by Hamas to help build the tunnels, and then infiltrate through the tunnels,” said David Bedein, the director of the Center for Near East Policy Research, which is producing the documentary.

Bedein said that Hamas has diverted international aid to construct tunnels with which to attack Israel. “At the same time, Hamas has been getting full supplies, including from Israel, for the past year, and they are able to get cement to continue building [the tunnels].”

He said that the tunnel in the video was a “model tunnel that they built” for training purposes, including the training of school children to kill Israelis.

“Hamas controls the UNRWA teacher’s union, and Hamas comes into the schools and [takes the children for this training] as one of their after-school activities.”