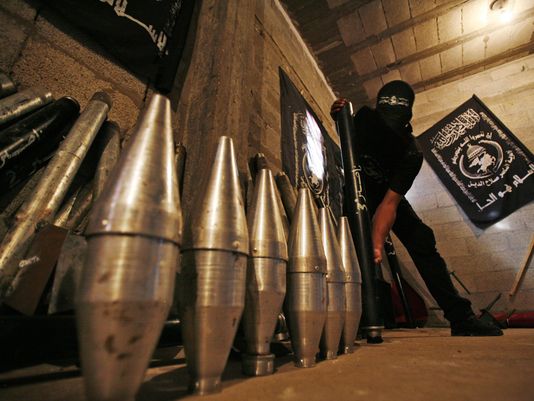 They may fight each other and disagree on tactics but there is one thing guaranteed to unite them and that is hatred for Israel.

Whether it is Hamas, Palestine Liberation Organisation, Palestinian Authority or Hezbollah it makes no difference. Methods may differ but the desire is identical. Abbas, the eternal President of a terror State in waiting may sound like a reasonable peace partner and portray himself as a benign patron of brotherly love to gullible media and politicians alike but the brutal truth is that beneath this deceptive persona lurks an entirely different individual. He may not openly display the crude prejudices of his colleagues who lead other terror groups but his real intentions are the same.

It is important to recognise this because far too often Israeli and Jewish leaders overseas prefer to live in a haze of myopic self delusion as to the ultimate agenda of those who plot against us.

There has been much speculation that Hamas is in the process of “moderating” its genocidal ambitions. Talk of producing a new charter and hints of accepting a Jewish State based on the 1949 armistice lines have caused doves to flutter in ecstatic excitement. Sober reality compels us to acknowledge that while some of the crude Jew hatred language of the current charter may be altered for cosmetic consumption, the basic aim remains the same. Looking behind the media spin we find something entirely different.

Speaking on Al Aqsa television on 8 March, a senior Hamas leader declared that “removing the Jews from the land they occupied in 1948 is an immutable principle in the Koran. Our position is Palestine in its entirety and not a grain of soil less.” He further urged members of Hamas and Islamic Jihad never to mention the term 1967 borders and added “we have liberated Gaza, part of Palestine but are not prepared to accept just Gaza. We will fight them wherever we can – on the ground, underground, from the skies.”

Now, you cannot make it clearer than that. Those who don’t want to hear will of course remain deaf but there is no reason why the sane majority should follow the pathetic progressives down a path doomed to bring disaster.

Hezbollah in Lebanon make their intentions perfectly clear. Funded and fueled by Iran, now flush with funds facilitated by Obama and Kerry, they have amassed a huge arsenal of rockets all primed and aimed in our direction. In recent days Israel has dealt with convoys supplying this terror group but eventually much more robust action will be needed to eliminate this major threat. We cannot rely on the international community to do anything meaningful so as usual it will be up to us.

Meanwhile those touted as “moderate” and wonderful “partners” continue to incite and delegitimise on a daily basis. They can do this safe in the knowledge that a corrupted UN will ignore their actions and instead spend its time passing resolutions condemning Israel. Within the last few days the following expressions of fraternal “friendship” have emanated from Abbas and other leaders of the Palestinian Authority.

At an event honouring Dalal Mughrabi, Fatah representatives praised this female terrorist for her actions. Dalal Mughrabi led the most lethal terror attack in Israel’s history, known as the Coastal Road massacre, in 1978, when she and other Fatah terrorists hijacked a bus on Israel’s Coastal Highway, murdering 37 civilians, 12 of them children, and wounding over 70.  Following is the text which appeared on a sign next to her photo: “Jerusalem is our oath”
“The 39th anniversary of the death as a Martyr (Shahid) of Palestinian fighter Dalal Mughrabi, one of the most famous Palestinian self-sacrificing fighters (Fida’iya). She was born in 1958 in one of the refugee camps in Beirut, and was the daughter of a family from the city of Jaffa that escaped to Lebanon due to the Nakba (i.e., “the catastrophe,” Palestinian term for the establishment of the State of Israel) of 1948.”

This murderer has also had a Fatah youth camp in Nablus named after her.

In honour of International Women’s Day, Jibril Rajoub, touted as an eventual successor to Abbas, hosted a ceremony in Bethlehem which glorified women terrorists. Plaques awarded to female “fighters” featured a map of “Palestine” which erased Israel.

At a ceremony marking the commencement of a project in the refugee camp by Jericho, funded by a Japanese NGO, the camp logo also shows an Arab State called Palestine completely replacing Israel.

Abbas in a speech stated on PA television: “The international community is becoming more and more convinced that the occupation of the Palestinian state by Israel is the reason for all the disasters that the region and the world are suffering from…”

Remember the ill fated resolution accusing Israel of being an apartheid State? After being forced to rescind this resolution the Jordanian Chairperson resigned in protest. This week Abbas awarded her a medal of valour for her fearless advocacy.

These are just a few examples but they demonstrate a consistent theme. Only the blind fail to see its message. The rest of us recognize only too well that any Palestinian State which might arise in Judea and Samaria, together with Gaza, will be a proxy for the Iranian regime. Its presence in our very midst will constitute a danger to the lives of every Israeli.

Despite all this clear evidence it was unbelievable to learn this week that the Israeli Government had facilitated the transfer of 300 million shekels in cash from the Gulf States to Gaza. Anyone with half a brain knows that this money will end up fuelling more terror. Apologists maintain that if we do not allow this, Hamas and Gaza will “explode” in frustration!!

Israel helps to fund those who plot murder and mayhem against its citizens? Is this insane? There is no accounting for the stupidity of so called experts. In the same week the Shin Bet Security Service arrested two Palestinian Arabs caught funneling Gaza reconstruction money from Turkish charities to Hamas. Why is one good and the other criminal?

The UN Human Rights Council, meeting this week in Geneva engaged in its usual ritual of Israel bashing. However this time they were shamed into silence as a result of an outstanding response to their lies by Hillel Neuer of UN Watch. His short rebuttal is a masterpiece.

Birds of a terror feather definitely flock together. Those supporting the murder of Israelis need to be thwarted and defeated not facilitated.

Birds of a feather, united by terror…writes Michael Kuttner