David Bedein, who has done more than almost anyone to expose the hate taught in UNRWA schools, has looked at the latest crop of textbooks published under the auspices of the Palestinian Authority in 2017.

I’ve spoken to him and he expends a great deal of effort and money to ensure that his translations are as accurate as possible.

Here is some of what he found (images of the pages can be seen at the link):

“The Zionist occupation pursued a policy of erasing Palestine’s Arab and Islamic features in general, and especially in Jerusalem. Since the first day of Jerusalem’s occupation, the Zionists started to change the identity of this Arab-Muslim city and make it [a city] of a Zionist nature. …They annexed the Islamic features to the Zionist heritage list, as they transformed the Al-Buraq Wall into the Wailing Wall;…they opened Jewish synagogues in Jerusalem’s Old City, and they are striving painstakingly these days to gain control over the Noble Shrine [Al-Haram al-Sharif – the Arabic traditional name of the Temple Mount] by letting the Zionist settlers to enter it daily in preparation for its complete takeover and cut any Muslim connection to this place that is sacred to Muslims.”

“For research:
Studies indicate an increase of cancer cases in southern Hebron compared to other Palestinian areas. I will investigate the connection of that to its proximity to the Dimona reactor in the Negev desert.”

“…The neighbor: ‘the curfew does not include us in Al-Shurfah [neighborhood]. It is imposed on Al-Natarish [neighborhood]. It seems that there is a barbecue party with Molotov cocktails in one of the buses to the colony [Jewish settlement] of Psagot on Jabal al-Tawil mountain.’

Let us think and examine:
Land is the pivot of colonialist Imperialism [verbally: settlement-oriented Imperialism – Al-Isti’mar al-Istitani in Arabic, ed.]. It strives as much as it can to take hold of it by all means, even by the extermination [ibadah in Arabic] of the inhabitants and their annihilation [ifna’].” 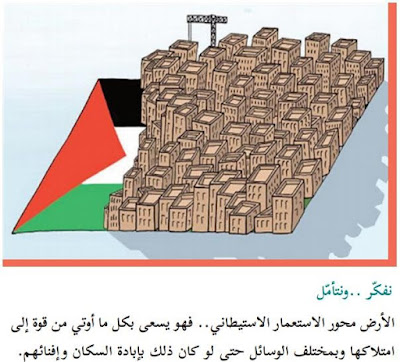 As the article shows, the US denies that any of this hate is taught – even as USAID helps fund the development of these textbooks.

(The textbooks are all online if you search for them; I verified some of these. For example, that last history book can be downloaded here.)