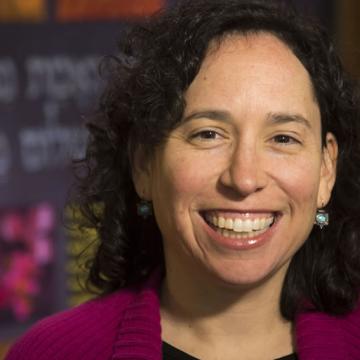 ​This is in keeping with Rabbi Roth’s allergy to pro Israel speakers. ​

Eight years ago, in my capacity as the Middle East Correspondent of Philadelphia Bulletin, I was assigned to cover the appearance at the same Princeton Hillel of a pro Israel Arab activist, Nonie Darwish, except that her appearance was cancelled by the same Rabbi Julie Roth.

Jewish students invited Ms,. Darwish to speak on campus because they felt it was important to hear her critique of radical Islam.

In the spirit of academic freedom and dialogue, Jewish students on campus offered the Moslem students the chance to rebut and respond to Nonie Darwish after her presentation and to offer him equal time to express his point of view.

The Princeton Islamic students would hear nothing of any such suggestion for a dialogue in an academic setting and pressed their demand that Nonie Darwish’s lecture simply be cancelled.

IRabbi Julie Roth, the Executive Director of the Center for Jewish Life at Hillel in Princeton, supported the campus Imam and told the students, “An invitation to Nonie Darwish is like an invitation to a neo-Nazi.”

Yet Rabbi Roth, who described herself as a leader in the promotion of “dialogue between the Muslim and Jewish communities on campus,” told me that she did not want to present views that disturb the sensitiivies of Muslims at Princeton.

So much for academic freedom and dialogue on an Ivy League campus.

From banning Nonie Darwish to banning Tzippi Hotovely, It would seem that Rabbi Roth’s academic standing should be questioned.
​