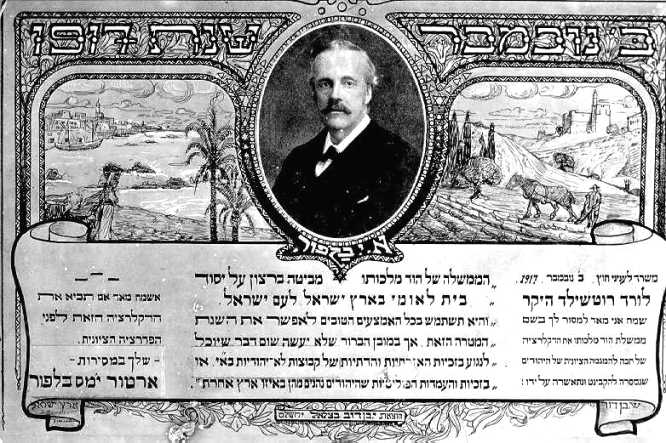 An international conference discussing the significance of the Balfour Declaration has taken place at the Knesset in Jerusalem…reports Michael Kuttner.

As stated on the invitation this gathering was intended to examine the historic context of the Declaration and look at the state of UK-Israel relations a century later.

A most impressive line up of speakers promised to provide an enthralling and informative opportunity to learn more about the document and the relationship between the UK and Israel today.

The Speaker of the Knesset, Yuli Edelstein, hosted the conference and welcomed guests. He mentioned the fact that one hundred years ago the Russian Revolution broke out and with the Balfour Declaration both promised much hope for Russian Jewry in particular. It was of course only with the fall of the Soviet Union that Russian Jews could freely exercise their right to join their brethren in Israel. The fact that 100 years later we were celebrating Balfour in a sovereign Jewish State was a miracle.

Short speeches of welcome were also delivered by the Chairman of the World Zionist Organization and the CEO of B’nai B’rith International.

The UK Ambassador, David Quarrey, read out a message from Theresa May, the UK Prime Minister, which was fulsome in its praise of Britain’s past role but somewhat ambivalent about the future. Her mention of “unfinished business” tarnished an otherwise positive message. Perhaps anticipating some negative comments the Ambassador departed from the venue and was not seen for the rest of the conference. Needless to say and to nobody’s surprise there was no message of support for Balfour’s Declaration from the leader of the UK’s loyal opposition.

Dr. Martin Kramer, President Emeritus of Shalem College and Koret Visiting Fellow of Washington Institute for Near East Policy spoke on “The Balfour Declaration and the “Jewish Problem.”

Professor Efraim Karsh, Director of the Begin-Sadat Center for Strategic Studies spoke on “The Balfour Declaration and the Arab World.”

Professor Simon Schama of Columbia University spoke on “the Anglo Jewish Community and the Balfour Declaration.”

The afternoon session comprised of a round table discussion moderated by the political correspondent of TV Channel 2. Taking part were the following:  MK Yehiel Hilik Bar, the Co-Chair of the Israel-UK Parliamentary Group.

All concerned provided their perspective on various questions posed. It was obvious that Joan Ryan, a fervent supporter of the Zionist enterprise, was somewhat under siege trying to paint a rather rosy picture of the state of the Labor Party these days as far as Israel and anti Semitism is concerned. She made it plain that Jeremy Corbyn’s views were not hers and maintained that the far left anti Israel stance represented only a small minority. The skepticism of the audience to this was evident. Melanie Phillips garnered the most enthusiastic applause especially when she stated in her usual forthright manner that the Balfour Declaration marked the high point of British- Zionist relationships and that it had been all “downhill” after that.

The finale and for many the highlight of this conference was the address by Lord Jacob Rothschild. He spoke about his family’s involvement with the Zionist cause, Lord Walter Rothschild, his great uncle’s relationships with Chaim Weizmann and other Zionist leaders and the opposition to Balfour by many in the Jewish establishment as well as in the War Cabinet. The Rothschild family is fully involved with philanthropic endeavors in Israel today and in fact the Knesset itself was donated by the Rothschild family. This address from the leading personality of British Jewry who had also brought his two grandsons to Israel for the occasion concluded a most impressive and well-organised conference.

Attendees were invited to go to the Knesset plenum where the PM, Leader of the Opposition and other politicians were scheduled to speak on the anniversary of Balfour’s Declaration.

One could not but feel that this was an historic occasion. One hundred years after Lord Balfour launched us towards Jewish Statehood a democratic and sovereign Jewish State was honoring his memory and vision.