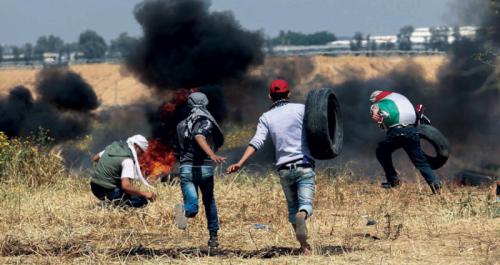 The events at Israel’s border with Gaza reflect a deep division between some of the NGO organizers of the Return March, led by Ahmed Abu Artima, and Hamas. Abu Artima, described by the British Guardian as a 34-year-old “activist and journalist,” opposed Hamas’ plan to hold a “Friday of Tires” on April 6, 2018. His followers on the March’s Facebook page suggested throwing flowers instead of burning tires.

Abu Artima, who works with European NGOs (non-government organizations), explained that the purpose of the gathering on the border was to prepare for the big march on Nakba Day in May and not to break through the fence at this point. Using force, he explained, would give legitimacy to the “occupation” to apply even greater force, while it would have no violent response to a mass march of refugees, including young people, the elderly, and babies. The main condition for the march would be that all of the marchers would refrain from any violence at all, including throwing stones, tires, Molotov cocktails, or the like.

Abu Artima distanced himself from the Hamas point of view when he referred to the shahids (martyrs) as “having died for nothing” and claimed that to achieve success in the national struggle, it was not necessary to sacrifice any martyrs at all. If anything, the opposite would be the case.

From reactions to Abu Artima’s statements, Hamas has accused him of betrayal, and Abu Artima’s supporters say that even though they primarily support his claims, it is forbidden to deny the importance of the shahids. Abu Artima responded that he would not be deterred by accusations of “traitor.”

While on the first Friday, March 30, 2018, Hamas remained silent until the very last moment and only got involved when the people had already gathered, Hamas took responsibility for last Friday’s events right from the beginning. The smell of smoke from the tires chased away Abu Artima’s men from the assembled gatherings, and it is possible that this was the intention of Hamas, along with its desire to cause trouble to Israel.

Hamas leader Ismail Haniyeh at the funeral of a Palestinian photographer killed in Gaza on April 6, 2018 (Arab press)

On the “Friday of Tires,” Hamas leaders joined the border protesters, but none of them spoke about the right of return or even mentioned the refugees – the objective of the whole event from the outset. Yahya Sinwar, for example, said that Gaza revealed to the world that the situation in the Gaza Strip could no longer continue. In other words, Hamas is seeking immediate aid and the opening of the crossings. The issue of “return” can wait.