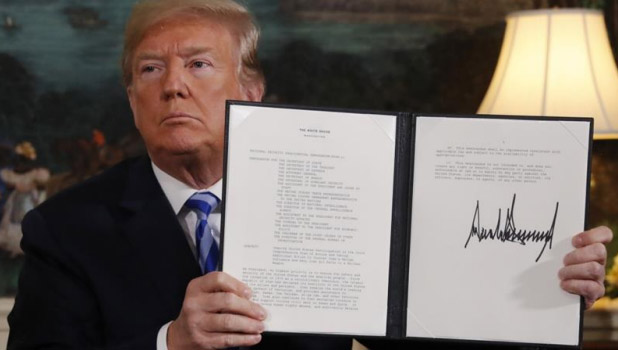 The celebrations have begun-the horrible Iran deal is no more. The Internet is flooded with hip-hip-hoorays next to screeds proving that Iranians are not nice guys, as if anyone ever said they were.

This wasn’t particularly hard, but it’s playing out exactly as I said it would. Here’s my pre-announcement article on this fine website.

So you canceled the deal. Now what?

What’s your next step? How do you follow this up?

First, let’s consider the consequences. Here’s one: Is there any reason why a foreign government would sign an agreement with the US now, knowing full well that in a very short time, the US might well cancel the agreement on its own?

Think about the implications. This administration already set off a trade war with Asia by pulling out of the regional trade accord overnight and then imposing tariffs on Chinese goods-again, unilaterally. Now there are rumblings that the US wants back into the Pacific trade mechanism. If I were an Asian leader, would I even consider that? I mean, what if President Trump changes his mind again?

Oh, sure, the US is big and strong and can dictate its terms to everyone out there. Except it can’t. Maybe 50 years ago it could, but now it can’t-not because of the machinations of the Muslim-loving, America-hating traitor Obama, but because the world is changing. Gunboat diplomacy is a term of the 19th century. This is the 21st century, and it doesn’t work anymore.

Where Obama went wrong was not with his policies, but with his inability to explain them and sell them to his people, even to his party. That doesn’t make him a Muslim-loving, America-hating traitor. It makes him a bad leader. Big, big difference.

I can and have explained his Iran deal, but as one of my friends wrote with tongue firmly in cheek (I hope), ‘You’re just a former important journalist. You’re not a famous actor. I don’t care about your opinion.’

So here’s the beginning of a 2015 article I wrote while the debate over the Iran agreement was in full force. Nothing has changed.

Here are four facts that turn the whole Iran debate on its head:

Here’s a link to the rest of the article.

Now I find myself responding to serious-minded people who bought into the anti-Iran tsunami that Israeli Prime Minister Benjamin Netanyahu has been flooding his people with for years, and supported the joint Netanyahu-Trump effort to scuttle the Iran nuclear deal. I repeat myself here and there, but that’s not because I’ve stopped thinking. It’s because the arguments are still valid:

-If it weren’t for the deal, Iran would already have nuclear weapons.

-You make deals because you don’t trust the other side, not because you do. Then you find ways to make it in their interest to keep the deal. Egypt-Israel is the best example I can think of.

-There’s no such thing as a military solution in the 21st century. Military action leads to new problems, not solutions. Iraq and Syria are the examples, again.

-In the end, Iran has bigger problems than Israel. It’s using Israel as a ploy, the way the Arab world has been doing for decades. This time, though, it isn’t working-Iran’s people really don’t give a crap about Israel one way or the other. As in Egypt, their focus is economic.

-Iran’s leaders also know full well what will happen to them if they attack Israel. It’s called second-strike capability. So we can take a back seat and just watch, while protecting our interests, if that’s what we want to do. But after the show-and-tell we watched on TV, it’s clear that Bibi wants to keep the Iran-Israel spat up front, for his own political reasons, and that is, indeed, his fault.

So again, what’s your solution?

And that remains the question. I’ve seen some people saying the sanctions should be reinstated and tightened in order to bring the Iranian economy down, foment unrest, and set off a revolution. Well, how did that turn out in Egypt, Syria, and Libya? Chaos at best, dictatorship at worst. Why do people assume that the good guys are going to come out on top? Historically, economic chaos and privation has led to despotic rule, not democracy. The West has been disastrously inept at regime change, because regime change can’t be imposed from outside.

So now what? Does the US clamp sanctions on European companies and banks that continue to uphold the agreement their governments signed and do business with Iran? What does that accomplish, besides breaking the world’s sturdiest and most important alliance since World War II?

There are those who are clamoring for military action, attacks on Iran aimed at destroying its nuclear facilities. It is totally beyond me why people clamor for wars. I’ve served in a couple (in the rear) and covered several more. What emerges in this century is that, unlike the 1967 Mideast war, for example, military confrontations no longer lead to solutions, even temporary solutions. They just lead to more military actions. Examples are Libya, Yemen, Iraq, and, of course, Syria. Attacking Iran would ‘only’ set off a region-wide war, involving Israel just because it’s here-the result of which would be thousands of dead, widespread destruction-and no change in the political reality, except for hardening positions across the board and ensuring that as quickly as possible, Iran-and probably others-would race to acquire nuclear weapons as ‘self defense.’ They don’t have to be built from scratch, you know. There are nuclear weapons, probably unstable ones by now, available in the former Soviet Union.

Do we really want that?

So I am left where I started, and for now, uncharacteristically, I have no answer. I usually refrain from writing an article before I have something constructive to suggest. This time I’m stuck still asking.

Journalist MARK LAVIE has been reporting on Israel and the Mideast since 1972, covering the Israel-Palestinian conflict from the front lines for CBC Radio and others, and living in Cairo during Arab Spring. His second book, ‘Why Are We Still Afraid?’ is ready for publication.