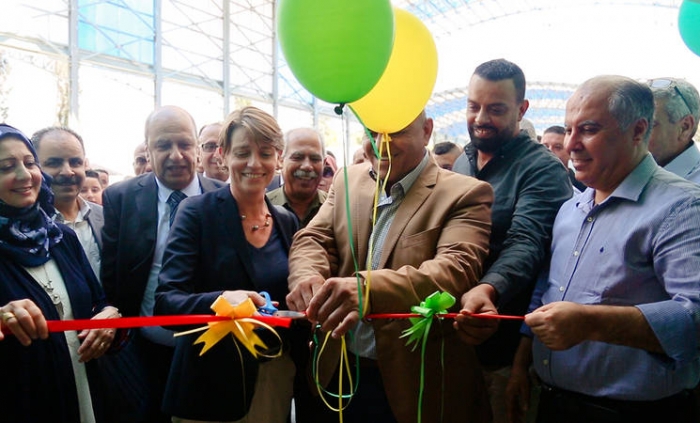 [This press release confirms the deepening Saudi involvement in the funding of UNRWA education, which is based on the “right of return by force of arms”. This press release, written in an innocuous manner, obfuscates the underlying violent theme of UNRWA education. The time has come to reveal the actual Saudi policy in the Middle East, which is not a peaceful agenda.- David Bedein]

Today, UNRWA inaugurated a new building in the United Nations Relief and Works Agency for Palestine refugees in the Near East (UNRWA) Jenin Basic Boys’ School in the northern West Bank. The school is one of tens of construction projects in the West Bank funded by the Kingdom of Saudi Arabia through the Saudi Fund for Development (SFD). This support includes the rehabilitation of 30 schools, as well as the full reconstruction of some seven schools since 2013. Currently, four schools are under construction, two are expected to be operational towards the end of this year, while two other schools are expected to be reconstructed by 2020.

The inauguration ceremony was attended by Director of UNRWA Operations in the West Bank Gwyn Lewis, the UNRWA West Bank field management team and engineers. Also in attendance was the Head of the UNRWA Infrastructure and Camp Improvement Programme Engineer Muneer Manneh. The inauguration also included the Governor of Jenin, Major General Akram al-Rjoub, representatives from the local community and members of the Popular Committee for Camp Services. In addition, representatives of the Palestinian Liberation Organization Department of Refugee Affairs, members from the Palestinian Legislative Council and representatives from the Municipality of Jenin and the Palestinian Directorate of Education, Ministry of Social Development and a representative of the Jenin Chamber of Commerce.

During the ceremony, Ms. Lewis said: “I am very proud to take part in the inauguration of the UNRWA Jenin Basic Boys’ School. This is the first example of a new generation of UNRWA schools that we look forward to replicating across the West Bank. Education outcomes can improve significantly when paired with a positive learning environment. The design allows students to learn in modern, up-to-standard surroundings and to play in an open outdoor space. In addition, the school facilities are environmentally friendly and primarily uses solar energy and recycles water. With great thanks to the Kingdom of Saudi Arabia, we are able to once again emphasize the fact that education is a key priority.”

The representative of the local community in Jenin refugee camp, Mr. Hassan Al-Ammouri, praised the project and stressed the importance and symbolism of UN Resolution 302, under which UNRWA was established: “We extend our thanks to UNRWA, the Kingdom of Saudi Arabia and the Saudi Fund for Development, and I would like to highlight the camp’s need for more projects, particularly the rehabilitation of the Jenin Girls’ School and the camp’s health centre.”

For his part, the Governor of Jenin, Major General Akram al-Rjoub, said in a speech during the ceremony: “We thank UNRWA for its outstanding role in safeguarding education for Palestine refugees, and we also extend our deep thanks to Saudi Arabia and its role towards UNRWA, which is a living proof of the Arab support for their Palestinian brothers.”

The opening of the new building comes less than a month after the start of the new school year. Thanks to the support of donor partners, UNRWA was able to open its schools on time this year. The Kingdom of Saudi Arabia (KSA) has contributed more than US$ 800 million to date in support of Palestine refugees through UNRWA. Over the last three years, the KSA has become the third largest supporter of the Agency.

UNRWA inaugurated a new building in the UNRWA Jenin Basic Boys’ School in the northern West Bank. The school is one of tens of construction projects in the West Bank funded by the Kingdom of Saudi Arabia through the Saudi Fund for Development (SFD)

UNRWA is confronted with an increased demand for services resulting from a growth in the number of registered Palestine refugees, the extent of their vulnerability and their deepening poverty. UNRWA is funded almost entirely by voluntary contributions and financial support has been outpaced by the growth in needs. As a result, the UNRWA programme budget, which supports the delivery of core essential services, operates with a large shortfall. UNRWA encourages all Member States to work collectively to exert all possible efforts to fully fund the Agency’s programme budget.

UNRWA emergency programmes and key projects, also operating with large shortfalls, are funded through separate funding portals. UNRWA is a United Nations agency established by the General Assembly in 1949 and mandated to provide assistance and protection to some 5.4 million Palestine refugees registered with UNRWA across its five fields of operation. Its mission is to help Palestine refugees in Jordan, Lebanon, Syria, West Bank, including East Jerusalem and the Gaza Strip achieve their full human development potential, pending a just and lasting solution to their plight. UNRWA services encompass education, health care, relief and social services, camp infrastructure and improvement, protection and microfinance.