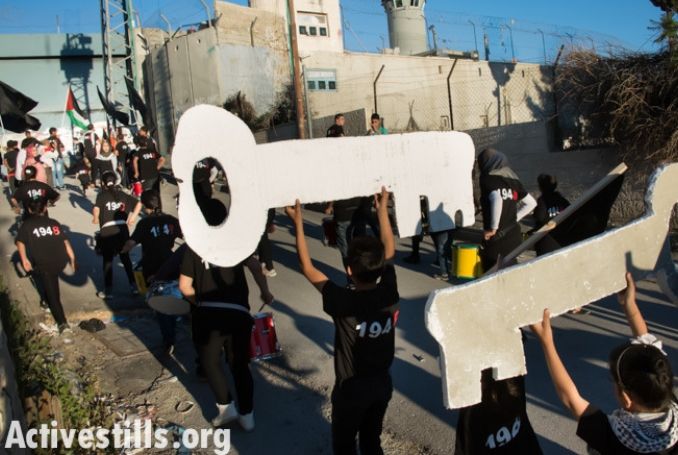 [The Palestine Chronicle tries to refute my assertion that the PLO does not recognize Israel never ratified the DOP, the Declaration of Principles of the Oslo accord which would have recognized Israel’s right to exist. Our agency has examined all school books used in the PA school system, whose central theme is the “right of return” by force of arms. Ms. Wadi, as proud Palestinian Arab citizen, must certainly know that the PA school books represent manuals of war against Israel. https://israelbehindthenews.com/studies-of-palestinian-authority-school-books-used-by-unrwa-conducted-by-the-center-for-near-east-policy-research-id-published-by-the-meir-amit-intelligence-and-terrorism-information-center/18974/ ] David Bedein

There is only One Legitimate Alternative to UNRWA; the Palestinian Right of Return

Since allegations about the misconduct and corruption of some staff members at the UN Relief and Works Agency for Palestine Refugees (UNRWA) came to light, both defenses and criticism of the agency have shielded the UN from its role in enabling the mandate’s renewal. By allowing Israel to perpetuate its colonial expansion, the UN has also supported the political imbalance which created approximately 5 million Palestinian refugees. The Palestinian right of return, meanwhile, has been divested of its potential in order to accommodate the UN’s specialty of maintaining human rights violations in order to create and manipulate a humanitarian agenda.

US President Donald Trump may have facilitated the targeting of Palestinian refugees with the decision to withhold funds from UNRWA, but despite bleating about the importance of funding while continuing to exploit the most vulnerable of Palestinian society, the UN is far from being at the helm when it comes to protecting Palestinian refugees. Its alternative to UNRWA’s dysfunctional organization and structure was to consult with Israeli NGOs. UN Secretary-General Antonio Guterres has asked “pro-Israel non-governmental organizations to submit proposals for UNRWA operations,” Israel Hayom reported. What qualifies a colonial power — one that has created Palestinian refugees by its very existence — to participate in decision-making that has a direct impact on the population that it has dispossessed?

Just days earlier, the same outlet ran an article in which the main focus was UNRWA’s mandate. It quoted Israel’s Ambassador to the UN, Danny Danon: “Until such time as UNRWA is permanently closed, we will use all tools at our disposal to increase the oversight to which it is subjected.” UNRWA, he declared, “utilizes the world’s funds for the dissemination of false narratives against Israel and systematically avoids fulfilling the mission for which it was established.” This claim, of course, is itself a “false narrative”, but Israeli exceptionalism will ensure that it is accepted by the mainstream media and politicians.

David Bedein from the Centre for Near East Policy Research justified his involvement in deciding UNRWA’s “alternative” by citing the UN’s alleged aspirations “to resolve conflicts and strive for peace”, despite the UN offering ample evidence of acting to the contrary. UNRWA, Bedein argued, “adopted the principles of the Palestinian [sic] Liberation Organisation – which aspires to destroy the State of Israel.” That’s yet another “false narrative”, given that in 1993 the PLO recognized the right of Israel to exist, and advocates for the two-state compromise, as per the latest affirmation by Saeb Erekat made a few days ago at the J Street Conference in Washington.

What Guterres is emphasizing in his latest betrayal of the Palestinian people is that international endeavors, such as the mandate for UNRWA, will now be subjected to Israeli demands and impositions. The critique regarding corruption within the agency must not be packaged as an Israeli concern. However, it is clear that Guterres, Israel and the US are exploiting the allegations in order to take the next step in determining how to eradicate Palestinian refugees from international discourse; what better way to do that than to play right into the hands of the US-Israeli plot that seeks an end to all references to the Palestinian right of return?

Flaws within UNRWA are an international responsibility. Granting Israel exclusive access to a service that is supposed to protect Palestinians is Guterres’s worst contribution to human rights violations so far. Israel colonized Palestine and dispossessed Palestinians, leaving them at the mercy of a purportedly rights-based international organization which is now handing the fate of a refugee population to its oppressors.

There is only one legitimate alternative to UNRWA and there is no need for Israeli NGO involvement of any kind. Rather than continue the mismanagement of Palestinians’ political rights, the international community must take an unequivocal stance by supporting and implementing the Palestinian refugees’ right of return to Palestine.

– Ramona Wadi is a staff writer for Middle East Monitor, where this article was originally published. She contributed this article to the Palestine Chronicle.