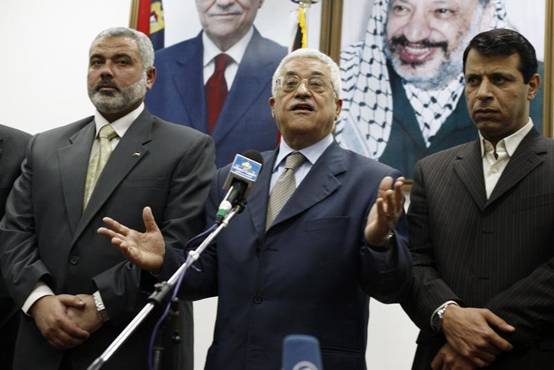 Now more than ever, it is clear to everyone that former Israeli Foreign Minister Abba Ebban was correct to state that “the Palestinians never miss an opportunity to miss an opportunity.”  Instead of embracing US President Donald Trump’s “Deal of the Century” as a starting point to begin negotiating for independent statehood, PA Chairman Mahmoud Abbas instead sought the passage of a UN Security Council resolution condemning the peace plan.

Although the UN Security Council resolution that was set to condemn the “Deal of the Century” was ultimately removed from the agenda, that was due to lack of international support, not a change of heart in the Palestinian Authority.  Abbas still addressed the UN Security Council in order to condemn the “Deal of the Century,” which he rejected before he even had the chance to see it.

In fact, the Fatah Facebook page has been even more blatant in its rejection of the ‘Deal of the Century,’ resorting to threats, ad hominin insults and foul language: “We’ll redeem Palestine with blood.  Over our dead bodies, we won’t let it pass and if you want to overstep my limit, Trump, we’ll blind you; and if you want war, we’ll declare it and only Allah will be able to extinguish it.   We’ll drive your Israel crazy and turn it upside-down.  Trump, gather up this deal quickly, fold it and roll it up, you idiot, put it in the center and shove it up your ass.”

In such an environment, how can we even begin to contemplate the creation of a PLO pro-terror state?  All the facts indicate that the PLO remains in a state of war with Israel and is not interested in living in peace beside Israel. The Center for Near East Policy Research recently reported that Dalal Mughrabi, a Palestinian female terrorist who murdered 34 Israelis and injured 71 others, is systematically presented as a role model for children in Palestinian schools: “The terrorist Dalal Al Mughrabi stars in the Palestinian curriculum as a super-heroine, equal in status to Yasser Arafat and to the Prophet of Islam’s wife Aisha.”

As a JCPA investigative report shows, the fact is that the PA, which is the administrative arm of the PLO, has enacted an unprecedented  new ordinance which provides an automatic financial award for anyone who murder a Jew, allocating seven percent of the PA annual budget funds for this pay-for-slay pro-terror policy.   Rabbi Ark Asherman, who heads the leftist Torat Tzadek, proclaimed, “If we continue to teach hate, no peace treaty can last.  I cannot defend what the PA puts in the textbooks.”

As Brigade General Yossi Kuperwasser wrote, “Abbas’ Palestinian Authority hurts the Palestinians themselves first and foremost. The Oslo Peace Process never envisioned Israel or some other outside power fulfilling the aspirations and expectations of the Palestinian people for freedom, a decent political system, and economic prosperity; by definition, they needed to be fulfilled from inside Palestinian society. The total failure to fulfill those expectations, therefore, begins with the P.A. itself, which has proved itself to be a deeply corrupt, incompetent, and undemocratic regime in the eyes of the people it purports to represent.”

“The Palestinian Authority has not held elections for more than 14 years; its elected parliament does not function. Instead, it governs by executive orders issued by a president who was elected back in 2005 and has declined to run for reelection since,” he continued.  “It denies its Palestinian citizens basic human rights and freedoms, such as freedom of speech. It tortures prisoners. Worst of all, the P.A. spends its resources on inculcating into the Palestinian consciousness and the Arab and international discourse a flawed, ahistorical narrative of victimhood that denies the existence of a Jewish people and its right for a state in its ancestral homeland.”  And this is precisely what slaughtered the two-state solution.  After all, how can Israelis accept the existence of a Palestinian state, when the Palestinian leadership refuses to return the favor and recognize our historic right to our homeland?  It is supposed to be two states for two peoples, not one side committing national suicide.

Of course, there are many advocates for a pro-terror PLO state that are living in denial about the facts on the ground.  When asked how there can be peace when young Palestinians are educated to follow in the footsteps of Dalal Mughrabi, Michael Koplow, the Policy Director of the Israel Policy Forum, stated in an exclusive interview that while the de-demonization of the other is critical for peace, the incitement and demonization of the other exists on both sides and not just the Palestinian side.  However, he could not come up with a single example of such incitement and demonization of the other in the Israeli schoolbooks.   In fact, Rabbi Asherman contradicted his claim: “During the Oslo years, Israel cleaned up their textbooks.”

In a Tel Aviv International Salon talk, Jeremy Ben-Ami of J Street repeatedly discussed the importance of creating a PLO state and condemned Netanyahu repetitively for being an impediment to peace by building settlements.  However, he refused to respond to my question regarding how the fact that Dalal Mughrabi is in the PA textbooks interferes with the prospects for a peaceful solution to the Palestinian-Israeli conflict.

Of course, there are individuals who support the creation of a Palestinian state but not a pro-terror PLO state, who are more grounded in the reality on the ground.  Former American Ambassador to Israel Dan Shapiro stated in an exclusive interview, “Obviously, getting to a two-state solution will require bold changes in leadership on the PA side.  The Palestinian leadership has not told the necessary truth to its public about renouncing violence.  Pay-to-slay is a reprehensible policy.  Terror groups are a major impediment to the creation of two states.  Those leaders will have to be replaced by more moderate Palestinians.  That is something that we have tried to address but without success.  That is a necessary condition.”

“The goal should be to be bring about a Palestinian leadership that does not adhere to any ideology or action that is hostile to Israel’s existence and its security,” he added.  “It may take a long time but among the necessary conditions is a Palestinian leadership that conveys to their people the legitimacy of the historic right for Israel to exist, the illegitimacy of violence, a realistic vision for Palestinian refugees, etc.   Also, a necessary condition is the need to create a viable state that can be a peaceful and democratic neighbor of Israel.”

Similarly, Rabbi Donniel Hartman, who heads the Shalom Hartman Institute in Jerusalem, argued: “I think that most Israelis don’t think that the two-state solution is possible today.  It is a long-term vision.  It is not implementable in the short run.   When someone murders Jews and gets financing for it, that is not a relationship.   A successful two-state solution must be a relationship, not a divorce.   Even when we separate, it cannot be a divorce.”  He believes that Sharon’s unilateral withdrawal from Gaza demonstrated the importance of a negotiated agreement: “Homes today in the Gaza vicinity are being bombarded by mortars and lethal balloons.  A Palestinian society that wants Hamas does not want a two-state solution.”  He stressed that we cannot let this happen to the areas surrounding Ben-Gurion International Airport and thus a series of prerequisites must be met before a two-state solution can be implemented: “Israelis and Palestinians have a lot of work to do.  Maybe, it can happen in 10 years.”

Rachel Avraham is an investigative journalist at the Center for Near East Policy Research and a political analyst working for the Safadi Center for International Diplomacy, Research, Public Relations and Human Rights.  She is the author of “Women and Jihad: Debating Palestinian Female Suicide Bombings in the American, Israeli and Arab Media.”